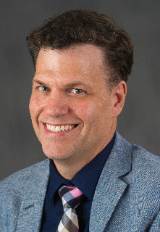 I always strive to push IWU students to think critically and question their assumptions, both in and out of the classroom.  Some of my most exciting teaching experiences have come about due to academic travel with students; I have lead students on course outings to Chicago, as well as to France, Italy, Canada, and the UK.  Students have studied with me in museums such as the Musée D'Orsay in Paris, the Tate Britain in London, and the Uffizi Galleries in Florence, and I have help them experience places as varied as a Cabane à sucre in Québec and the incredible Scrovegni Chapel in Padua.

Academic Leadership:  My service at IWU spans several campus committees, including Promotion and Tenure (Chair), Curriculum Council, Academic Standards (Chair), May Term Advisory Committee, and Study Abroad Advisory Committee, as well as serving as departmental chair of the MCLL Department, and IWU faculty secretary.  I also work as an independent academic consultant and reviewer for language departments and programs, particularly those that are undergoing the self-study process.

- "American Cultural Hegemony and Classic Children's Cartoons:  Dynamics of Identity and Alterity in Representations of the Foreigner."  Forthcoming (2013) in the academic journal Children's Readings.