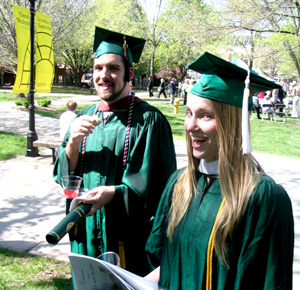 Has an internship with the Milwaukee Repertory Theater this year where she is working as an Assistant Stage Manager/Stage Manager.

Colleen O'Connor '14 was named as a 2014 Mellon Humanities Scholar.

Janna Strain just announced her first major work of fiction, Edenfall, is being released by Ceti Publishing (a publishing house started by another IWU English alum, Chris Francis) on July 15th. It's already up for pre-order on the website here: http://www.cetipublishing.com/edenfall.

"One of the cool things about this particular novella," Strain says, "is that the initial drafts were actually written for an IWU English class led by Brandi Reissenweber. I've reached out to her to let her know as well; it only seems appropriate to acknowledge the university that fostered some of my best creative work now that it's actually going somewhere."

Is now Senior Editor of Independent Agent magazine, published by the Independent Insurance Agents and Brokers of America.

Is a press secretary for the Indiana Senate Republican Caucus.

Has been accepted to Cornell University's MFA program in Creative Writing.

Is pursuing a PhD in English literature at Boston College. She also works part-time for a Chicago-area e-learning company.

Is teaching English as a foreign language in Romania for the Peace Corps.

Is working at WJBC radio in Bloomington and was accepted into the University of Illinois Master's program in journalism.

Has been accepted to Brandeis University this fall for an MA in International Development. 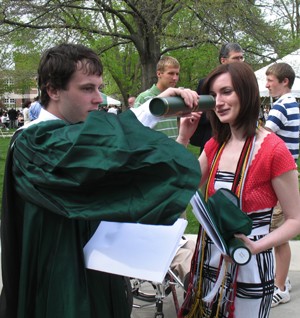 Is the Director, Communications and Public Engagement for the Consolidated School District 158.

Received an MLS from Indiana University and is now Lab Archivist at Fermilab.

Earned a Master's in English at DePaul University and is working as an assistant editor in the books department at Quintessence Publishing.

Is pursuing an M.F.A. in filmmaking at New York University.

Is a Development Editor working on health professional books for McGraw-Hill.

works in internal communications for COUNTRY Financial in Bloomington, Illinois.

Is pursuing a Master's degree in environmental studies.

Is Digital Publishing Project Manager at the University of Michigan Scholarly Publishing Office.

Is E-communications Associate for the Goodman Theatre in Chicago.

Is pursuing a Master's degree in international development.

Is literary fellow at the Huntington Theatre in Boston.

earned a Master of Social Work at the University of Illinois and is the assistant director of the Women's Resource Center at Illinois.

Is Children's Marketing Associate at Sourcebooks, Inc., a publishing company in the Chicago area.

Was a double major in English and history who's now a secondary English teacher in Abingdon, United Kingdom.

Is a teacher at the Gwendolyn Brooks College Preparatory Academy.

Is a tenured Assistant Professor of English at Heartland Community College, where she teaches different levels of composition as well as creative writing and the occasional literature class. She is also the Writing Across the College Coordinator, which means she is the point-person for help with creating assignments/teaching writing concepts in all the different disciplines and departments here at HCC.

Attended University of Chicago's Graduate School of Business and with an MBA concentrating on Strategic Management and Entrepreneurship. She is currently working for Coinstar, Inc. as part of their strategic planning team.

Is bicycling across South America as part of the Reach the World program, reporting on his journey via the Internet to thousands of Chicago public school students.

Teaches high school Humanities in Providence, RI where she also teaches and mentors for the Brown University MAT program. She is an active poet and organizer in the spoken word community. She was the 2009 New England Individual Slam Champion and a 2011 National Poetry Slam finalist.

Was a double major in English-Writing and dance at IWU, and combined those majors in a career as the circus performer for Cirque-tacular who handles all the public relations for her troupe. 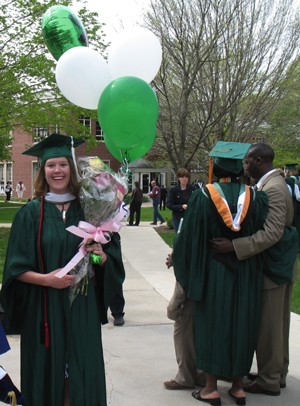 Received an M.A. in Environmental Journalism from Michigan State University and is now a Development Associate at the Environmental Law and Policy Center.

Is Manager of Grant Writing & Direct Marketing at the AIDS Foundation of Chicago.

Found that the skills an English major develops prepared her to work as Merchandise Planning Manager for Textiles at Crate & Barrel.

Is the Research Manager at FUSION, a new TV Network launched by ABC and Univision.

Received a J.D from Yale Law School and is an associate in the law firm of Irell and Manella.

Is pursuing a Ph.D. in English at the University of Michigan.

Went on to form his own marketing company.

Is the Director of Development for Principal and Major Gifts at Harvard University.

Used her English-Writing major, Argus work and internship experience to rise on the corporate ladder at Country Financial, where she is now ITS Project Manager specializing in Change Management. 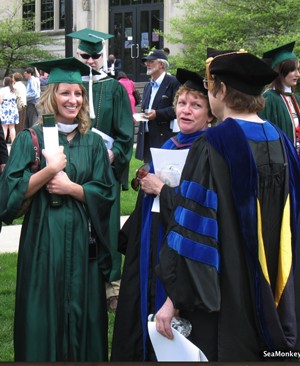 Got a law degree from Stanford and is practicing privately in the Chicago suburbs.

Began as a journalist but is now in the Master's program at Washington State pursuing a degree in English composition and rhetoric.

Just produced her first batch of wine at Starmont Winery in Napa.

Is Managing Editor at the Marine Corps Times and has interviewed Presidents Bush and Obama as part of his job.

Is teaching religion at a private high school in the Chicago suburbs.

Went on to work for a New York City public relations firm and turned those experiences into his first novel, Spin (St. Martin's Press, 2009). His second novel is already written, and he is under contract to produce a third.

Is an award-winning General Assignment Reporter at the Chicago Sun-Times.

Is an Associate Professor of English at Rose-Hulman Institute of Technology.

Is a Massachusetts civil litigation attorney, Vice-President of LawRex.com (The Legal Referral Exchange), and Director of Social Media for The Rainmaker Institute. 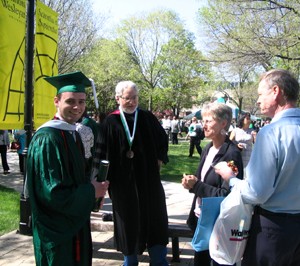 English alum of IWU, has been selected as a U.S. magistrate judge for the United States District Court for the Southern District of Illinois. Also reported by  WMIX-Radio.

Worked as a reporter for a time before moving on to become an Advertising Analyst for State Farm Insurance.

Is the Night Editor at the International Herald Tribune in Hong Kong.

Is Chair, Braun Fellow and Professor of English at Saginaw Valley State University whose experiences at IWU led him to pursue further research in the field of African American literature.

Is a Special Sections Editor/Designer for The Daily Herald in Chicago.