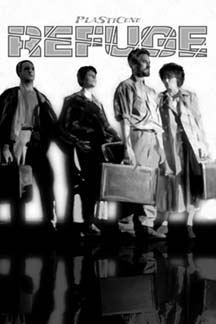 Free tickets for March 5 performance of Refuge are available to the campus community but must be picked up and cannot be reserved by phone.

Other public events of the residence will include a formal panel discussion of processes of collaboration and composition on Sunday, March 6, at 7 p.m. in McPherson Theatre, and on Tuesday, March 8, at 7 p.m. in the Hansen Student Center, 300 Beecher St., Bloomington. There will also be performances by IWU students of their projects as a result of the workshops.

Best known for their performances of The Palmer Raids, Plasticene is an experimental company, which creates its shows through a collaborative process that includes all of its company members, designers, and musicians. The company explores historical, political and social issues and uses a performance style that features high-impact physicality and soundscape (the audio world of the play).

According to Sara Freeman, assistant professor of theatre arts at IWU, “The company does not start with a text, they create the whole performance score including the words that are said through a process of devising and an ensemble creation.”

The Chicago Tribune says of a Plasticene performance: “This striking piece of art seems especially timely when performed amid current real life events…an intense and visceral hour spinning with hidden insights.” The Chicago Sun Times says a performance of Refuge is “a mind-boggling act of synchronization and timing. Refuge is at once seamless, compressed and spontaneous. The performers' concentration and control are phenomenal…you watch them and are afraid to blink.”

Refuge, which had a world premiere in 1996 at the Schaeberle Studio in New York, follows the stories of four individuals thrown off the edges of their lives, while struggling to find balance and meaning. Thematically concerned with espionage, war, and deadly secrets, the play explores the search for safety. The stories are told without words and gently unfolding acting that critics say lead into a stunning finale.

Company members include: Dexter Bullard (artistic director and founding member of Plasticene), Brian Shaw (founding member of Plasticene and faculty member in the Columbia College Theatre Department), Eric Leonardson (electro acoustic composer, radio artist, sound designer, instrument inventor and active member of Chicago's experimental music and art community), Mark Comiskey (ensemble member, who has produced over 60 original productions in Chicago since 1989), Sharon Gapfert (a company member since 1998, choreographer, who has taught acting at Barat College, DePaul's Theatre School, University of Illinois in Chicago and The Public Guardian's Office), Carrie Kennedy (a company member since 1998 and the production director and lighting designer), Dominic Conti (ensemble member, who teaches classes with Plasticene), Lori Hall-Araujo (company member since 2002 and costume designer), and Tere Parkes (Chicago actor and performer, who joined Plasticene after creating roles in And So I May Return and The Palmer Raids).