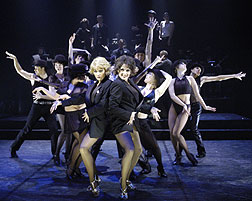 BLOOMINGTON, Ill. — Illinois Wesleyan's School of Theatre Arts will present murder, passion, fame and all that jazz in Chicago, one of the most recognizable musicals of the 20th century. The production, which the School of Theatre Arts promises will feature a “mixture of popular appeal and artistry,” will be held Feb. 22-26 at 8 p.m. and Feb. 26-27 at 2 p.m. in the McPherson Theatre (2 Ames Plaza East, Bloomington).

Directed by Illinois Wesleyan Associate Professor of Theatre Arts Tom Ossowski and featuring book and music by songwriters John Kander and Fred Ebb, the show starts with a bang — literally. Following the frivolous atmosphere of Chicago in 1929, a seductive club singer, Velma Kelly and fame-hungry Roxie Hart are caught up in a life of “gin and guns,” landing them in the Cook County Jail for murder. Competing both for the attention of their suave lawyer, Billy Flynn and for tabloid headlines, they dance and sing their way through a timeless satire on media and America's judicial system.

Although this show may seem purely fictional, the Tony Award-winning musical is based on true murder cases which took place in Chicago in 1924.

In the time of Prohibition, two women, a laundry worker and a sultry cabaret singer killed their lovers under the influence of jazz and liquor. The murderesses, Belva Gaertner and Beulah Annan were adored by the public following the Chicago Tribune reporter, Maurine Dallas Watkins' coverage of their trials. Describing the women as the most stylish and beautiful women on Murderess Row, she transformed the felons into tabloid darlings, turning murder into “Chicago's favorite form of entertainment.”

After Annan and Gaertner were acquitted of their murders, Watkins felt dismayed by her role in feeding the public's appetite for tabloid gossip and left journalism for the Yale School of Drama. In one of her classes, she wrote a play called, The Brave Little Woman, an account of the Chicago trials, in which she kept her own role as Mary Sunshine, a nosey, disillusioned reporter quiet.

Watkins' play, which was soon renamed Chicago, ran for a respectable 172 performances in 1926. The sensational play was adapted into a silent movie in 1927 and later turned into the movie, Roxie Hart starring Ginger Rogers in 1942 before catching the attention of choreographer Bob Fosse in the 1950s. Fosse acquired the rights to the play after Watkins passed away in 1969 and he joined forces with Ebb and Kander to turn Chicago into a musical in 1975.

The Broadway revival performance of Chicago in 1996 won six Tony Awards. Since then, it has been transformed into an Academy Award-winning film featuring a cast of renowned Hollywood actors.