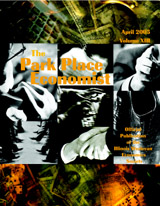 BLOOMINGTON, Ill. - What effect does the college major have on wages? Is it possible to predict the number of Olympic medals that a country will win based on economic development? Why are foreign manufactured cars gaining market share in the United States?

These are questions addressed by articles appearing in the 13th edition of The Park Place Economist, a journal published by Illinois Wesleyan University undergraduates.

The Park Place Economist is one of the few undergraduate journals of economics. This year's edition was edited by Ana Maria Romero, a senior economics and accounting double major from Barranquilla, Colombia.

Articles in this year's edition are:

• “Does the Arbitration Process Solve Monopsonistic Behavior in Baseball?” by Andrew Tarman

• “Which Baseball Statistic Is the Most Important When Determining Team Success?” by Adam Houser

• “The Effect of College Major on Wages” by Amanda Thorson

• “Differences in Rates of Return to Education: Immigrant and Native Men in the 1980's” by Grant Dodds

• “Inevitability of Regional Variations in the UK” by John Haugen

The journal is available on-line at http://sun.iwu.edu/~econ/top/ppe.htm.