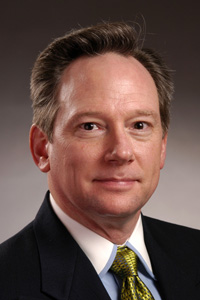 William West joined the Illinois Wesleyan faculty in 1982.  He holds degrees in woodwind performance from West Virginia University and the University of Michigan.

Mr. West teaches flute and saxophone and presents regular solo and chamber music recitals on both instruments.  In addition to performances of the standard repertoire, he is very involved in the presentation of newly and recently composed music and has collaborated with numerous composers on performances of their works.  Mr. West played principal flute with Opera Illinois from 1989 through 2006.  Also active as a collaborating pianist, Mr. West has extensive experience with both instrumental and vocal solo literature and chamber music, again with emphasis on newly and recently composed works.

Other teaching responsibilities include work in the School of Music’s basic musicianship sequence of courses, in which he currently teaches sophomore level Music Theory, and in the series of pedagogy courses for music education students, in which he teaches Woodwind Techniques.

Mr. West’s research specialty involves performance on pre-Boehm flutes and the study of their literature.  His collection of instruments includes replicas of flutes dating from the beginning to the end the 18th Century, including instruments after Hotteterre, Denner, Quantz, Lot, Rottenburgh, and Tromlitz.