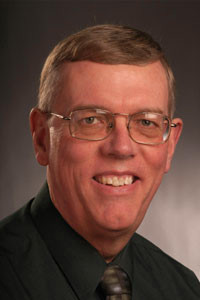 Tom Streeter is the director of the jazz program and Professor of Music at Illinois Wesleyan. As the founder of the jazz program at IWU he has developed jazz studies courses and conducts the two jazz ensembles. His duties also include teaching of the trombone studio and conducting the trombone choir, plus serving as head of the School’s Instrumental Department. His interest in music-related computer technology has earned him several University grants to learn new music software applicable to jazz arranging, to assist in preparing a computer multimedia program for his jazz history course using current multi-media software, and to create a computer improvisation practice lab. He has team taught an introduction to multimedia course in the University's May term. He created an introduction to technology and jazz pedagogy for music education majors that he teaches each fall. Dr. Streeter also created the IWU Jazz Festival which hosts thirty high schools and junior high schools each year. This year the festival celebrated its 35th anniversary, and featured guest saxophonist Chris Vadala.

Dr. Streeter holds both bachelors and masters degrees from Indiana University and a doctorate from the Catholic University of America. His doctoral work was accomplished while a member of the internationally acclaimed USAF Jazz Band "The Airmen of Note" stationed at Bolling Air Force Base in Washington, D.C. His performance credentials on bass trombone also include extended tours with Henry Mancini and Andy Williams, plus performances with the Jimmy Dorsey Band, and the Nelson Riddle Orchestra. He has recorded an album "Music for the Bass Trombone" which was released on the Kendor Label. In May of 1999 he and the IWU Jazz Ensemble performed for and were the guests of the Bloomington / Normal sister city committee in Asahikawa, Japan. Since the Japan trip the band has toured and performed in Scotland and England, and in Italy, which has expanded their international scope.

Dr. Streeter has published articles in the International Trombone Association (ITA) Journal (his doctoral dissertation on 19th century bass trombone), and in the recently disbanded International Association of Jazz Educator’s (IAJE). He was published several times in the journal of the IAJE called the Jazz Education Journal (JEJ). To enhance his teaching of jazz pedagogy at IWU, he interviewed three of the top high school/junior high school directors in the country to better understand why the programs are/were so successful. The interviews gave terrific insight into the teaching of young jazz students, which led to the decision by the editor of the JEJ to publish each of them. In the spring of 2004 the JEJ ran the article with Ron Carter (about his experience at East St. Louis Lincoln High School), in the spring of 2005 Jim Culbertson’s interview was published (director of the Decatur McArthur High School program), and in the spring of 2006 the interview with Sam Hankins appeared in the JEJ (Hankins was director of the Edison Junior High School program at the time).

For a number of years, Dr. Streeter was the program director of the Birch Creek Music Center jazz sessions in Door County, Wisconsin, and led the "Academy Band" in concerts in the renovated barn, which acts as the Center's unique performance venue. After two years away from Birch Creek, he returned the summers of 1999 and 2000 to again lead the Academy Band, and to help produce a CD, commemorating the 25th year of the Music Center.

Dr. Streeter was one of the founders and the first treasurer of the International Trombone Association. He continues a busy clinic and adjudication schedule throughout the nation, including directing the Honors Jazz Band at the Illinois Music Educators Conference in Peoria.

He and his wife Christine Pfeiffer Streeter are the parents of six children – all graduates of Brigham Young University in Provo, Utah – who have given them fourteen beloved grandchildren.