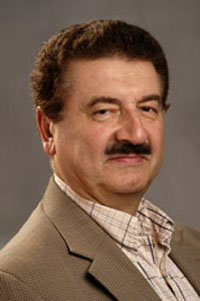 Mr. Vadim Mazo has pursued a career as a teacher, soloist, chamber musician, and conductor.  Presently he is an Associate Professor of Violin and Viola at Illinois Wesleyan University.  Mr. Mazo studied at the Byelorussian State Conservatory in Minsk with Michael Goldstein, a student of Pyotr Stoliasky.  From 1968 to 1980, he was a soloist with the Byelorussian Philharmonic and performed with the Minsk Chamber Orchestra and the Byelorussian Symphony Orchestra.  He performed on radio, television, and with performance tours throughout the former Soviet Union with such international artists as O. Kagan, M. Rostropovich, and M. Shostakovich, among others.  He immigrated to the United States in 1980, and before coming to Illinois Wesleyan University, Mr. Mazo collaborated with the Fine Arts Quartet and held teaching positions at the Wisconsin Conservatory of Music, the University of Wisconsin at Green Bay, and the University of Evansville.

In the past, Mr. Mazo founded and directed the Illinois Wesleyan Camerata, an ensemble which Ovation magazine deemed “excellent by any standard.”  In January of 1991, it gave concerts in the former Soviet Union, Germany, and England.  Additionally, the group performed in Weill Recital Hall at Carnegie Hall in November of 1993 with the “Music for Peace” program.  Mr. Mazo founded the Ameropa Musical Arts Festival in 1993, www.ameropa.org, an organization dedicated to the collaboration of American and European chamber musicians and ensembles.  With the strong belief that music is an international language that crosses all borders, Mr. Mazo selected Prague as the venue for the festival.  Its central location in Europe and rich musical heritage greatly enhances the harmony and understanding pervading this unique artistic experience.

Professor Mazo is a devoted teacher.  As a pedagogue, his teaching activities have taken him many places around the world.  He has been invited to present master classes everywhere from American music schools such as Northwestern University, Lawrence University, the Universities of Kansas, Illinois, Wisconsin, and Long Beach California to Greece, Spain, the Czech Republic, Japan, England, Germany, Canada, the Conservatoire Superior in Paris, and elsewhere in France.  More recently he has conducted master classes in Thailand, Taiwan, the Philippines, China, Hong Kong, Russia, and Byelorussia.  As a member of the faculty and as a performer, he participated in the Boccherini and Mozart-issimo festivals in Madrid, the Mozart in Monterey festival, the Southeastern Music Center, the B. Martinu festival in Prague, and the Interlochen Chamber Music Conference.  He has also collaborated as a conductor and soloist with the Suk Chamber Orchestra in the Prague Spring Festival and Virtuosi di Praga, and most recently with the Manila Symphony Orchestra.  Professor Mazo is an active performer as a violinist, violist, and chamber musician, featured in a Carnegie Recital Hall (a 1992 program, “Homage to Shostakovich”) and many various concert venues on a regular basis in the USA, Europe and Asia. Since December 2012, Professor Mazo has been appointed guest professor at Sichuan Central Conservatory of Music in Chengdu, China.

Audition Requirements:  String candidates for the BM and BME programs should prepare the following repertoire:  at least one movement from a standard concerto or a comparable composition, a movement from an unaccompanied Bach suite, and an etude or caprice.  At least one of these pieces should be memorized.

His new teaching and performing activities this year are in China, CASI www.pandart.org
and "Musical Bridges" Master classes in St. Petersburg,Russia www.musical-bridges.webs.Com

A balanced relationship between physical and technical foundations is an important component of mastering an instrument in my violin/viola class. As music is an “art in time,” there is a need for a creative organized structure. The beauty of one’s sound production is achieved through each student’s discovery, which is the result of the professional development of foundations and self-expressiveness. Opening personalities in young musicians is vital for their future development. I encourage my students’ self-development through the harmonious relationship that is achieved by balancing the technique of both hands. It is essential for my students to learn how to “breathe music” effectively, as well as enjoy and maintain the “invitation” of the instrument to the body. Communication with and through music is a crucial step for developing curiosity as a departure point for knowledge. With my belief that music is a universal language that unites people, I encourage my students to broaden their horizons and explore global music and cultures. In both playing and knowledge, I want to see that my students are versatile and well rounded in order for each of them to face successfully the new demands of the music world of today. The combination of individual practicing, lessons, studio classes, and performance opportunities provides a balance of intensity of the brain and relaxation of the body. The atmosphere of creativity through such means has to be consistent in order to maximize one’s individual artistic progress.