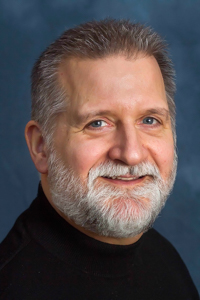 J. Scott Ferguson is Professor of Music and Director of Choral Activities, where he conducts the Collegiate Choir and Chamber Singers, and teaches studio voice, choral conducting, and choral literature. Dr. Ferguson received his undergraduate training at Oberlin Conservatory in organ performance, studying with Haskell Thomson. He completed graduate studies in choral conducting at the University of California, Irvine, earning the Master of Fine Arts, and the University of Wisconsin, Madison, where he earned the Doctor of Musical Arts. He has studied choral conducting with Robert Fountain, Joseph Huszti, Daniel Moe, and Howard Swan, orchestral conducting with David Becker and James Smith, and voice with Robert Fountain, Joseph Huszti, and Beverly Rinaldi. Before his appointment at Illinois Wesleyan University in 1996, he served on the faculty at the State Conservatory of Music in Bratislava, Slovak Republic, Hope College, Plymouth State University, The College of Wooster, and the University of California, Irvine. His choirs have appeared on tour throughout the United States and Europe, and have performed at state and regional ACDA and NAfME conferences. Dr. Ferguson is in demand as a choral clinician, festival conductor and adjudicator, and has presented choral workshops and lectures in the U. S., Europe, and South America. He has published articles on Slovak choral music in the ACDA Choral Journal and is the compiler and editor of the Slovak Choral Series, published by Alliance Publications. He is a frequent member of juries at international choral competitions in Europe. Dr. Ferguson directs the Chapel Choir at Second Presbyterian Church, Bloomington, and is organist and cantor at St. Joseph’s Catholic Church in Chenoa, IL.