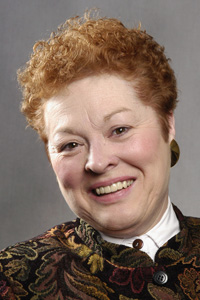 Dr. Linda J. Farquharson (Dr. F) is the first woman in the history of the School of Music at Illinois Wesleyan to achieve the rank of Professor of Music.  Long before it became fashionable for a woman to serve as conductor, Dr. F's passion was, and still is to teach singers the "astonishing art of the score" in the classroom and from the "Pit."  Certainly, Dr. F brings through her extraordinary examinations an invigorating synthesis of expectation and edification that both challenges and uplifts advanced undergraduate students who have a passion for opera performance.  A small sampling of Dr. F's Illinois Wesleyan opera resumé includes: Le Nozze Di Figaro, Cosi fan Tutte, Don Giovanni, Die Zauberflote, Die Fledermaus, Merry Widow, Il Barbiere di Siviglia, Carmen, The Tender Land, Gianni Schicchi, Dido and Aeneas, and all the major Gilbert and Sullivan Operettas.

For the last decade, Dr. F's teaching and conducting energies have been directed to more globally diverse vistas.  One of her favorite courses occurs during May Term when selected Illinois Wesleyan students participate in a travel course abroad.  During the immersion experience, students investigate the musical arts by engaging in performances and discussions with performers in inspirational and historical venues.