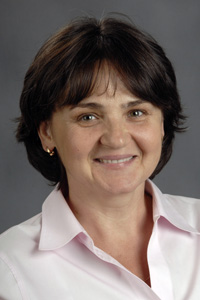 Coordinator of Accompanying, School of Music

Eva Ferguson received the Master of Fine Arts degree in piano performance from the Academy of Music in Bratislava, Slovakia, in 1985. From 1985 to 1996 she was an accompanist at the Academy of Music in Bratislava. In 1988 she joined the faculty of the State Conservatory of Music, and from 1990-1994 was the head of the Accompaniment Department. During the 1994-95 academic year she was a staff accompanist at the Royal Scottish Academy of Music and Drama in Glasgow, Scotland. From 1984 to 1996 she participated in several international competitions as an accompanist and frequently won the award for best accompanist. She also maintained a busy concert schedule with leading performers throughout Europe. Since 1996 Ms. Ferguson has been an adjunct instructor and Coordinator of the Accompaniment Department in the IWU School of Music. In 2008 she was named a Visiting Assistant Professor.