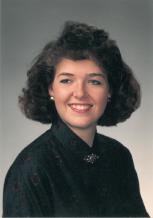 The Linda Karlovetz Favero '90 Scholarship was formed by friends and classmates to honor her memory and assist students who share her passion for life. While attending Illinois Wesleyan, Linda was an active member of Kappa Kappa Gamma sorority and an elementary education major. After graduating from IWU, Linda was a beloved teacher in the Parkway School District in St. Louis, MO and was a supporter of Forest Park Forever, St. Louis Zoo, and Drug Abuse Resistance Education (DARE).

Scholarship recipients are typically chosen from the hometown areas of the scholarship donors. We look for students who, like Linda, will enthusiastically take full advantage of everything Illinois Wesleyan has to offer and then go forward into the world to make it a better place. Linda exemplified everything that is great about being a Titan, and we are proud to award scholarships to deserving students to honor her memory.

The progress thermometer below represents totals as of December 22, 2020.