My Summer at the Peace Garden 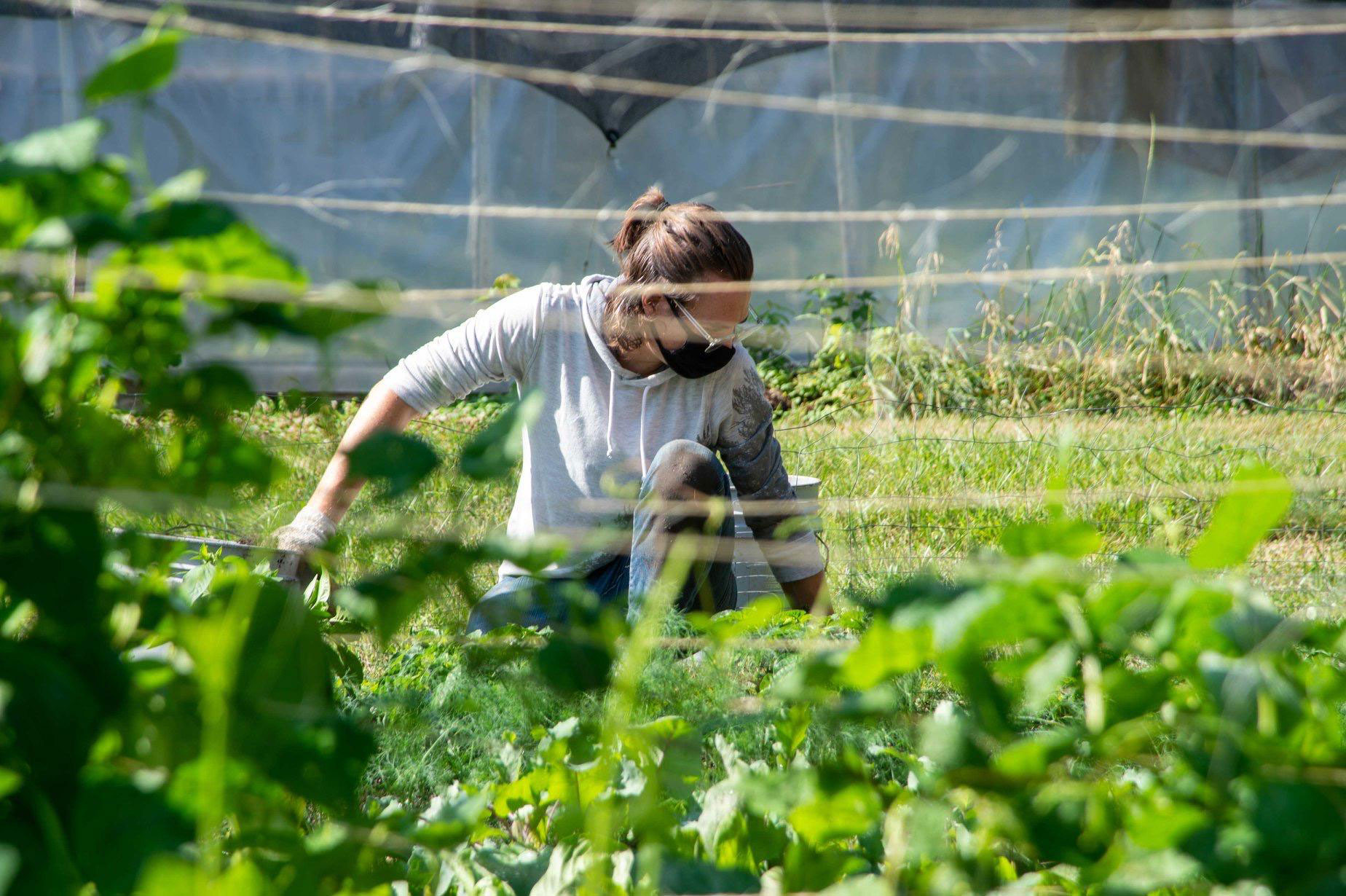 When life gives you lemons – the current global pandemic, the protests against systemic racism and police brutality – you make lemonade. While I’ve yet to make any actual lemonade this summer (sorry to my friend Ethan, with whom I promised to make lemonade last week but bailed), I’ve managed to make many other tasty goods from various component parts. Pesto and pizza made with basil and garlic, jam made with black raspberries, salad made with kale, cucumbers, and tomatoes, tea sweetened with honey — all of these ingredients have come from the IWU Peace Garden, which I’ve had the privilege of managing this summer as the summer intern. The majority of harvested goods has been given away to my army of helpful Thursday morning volunteers (more on this later) and to the West Bloomington Revitalization Project’s (WBRP) Veggie Oasis, where I am also interning (more on this later). 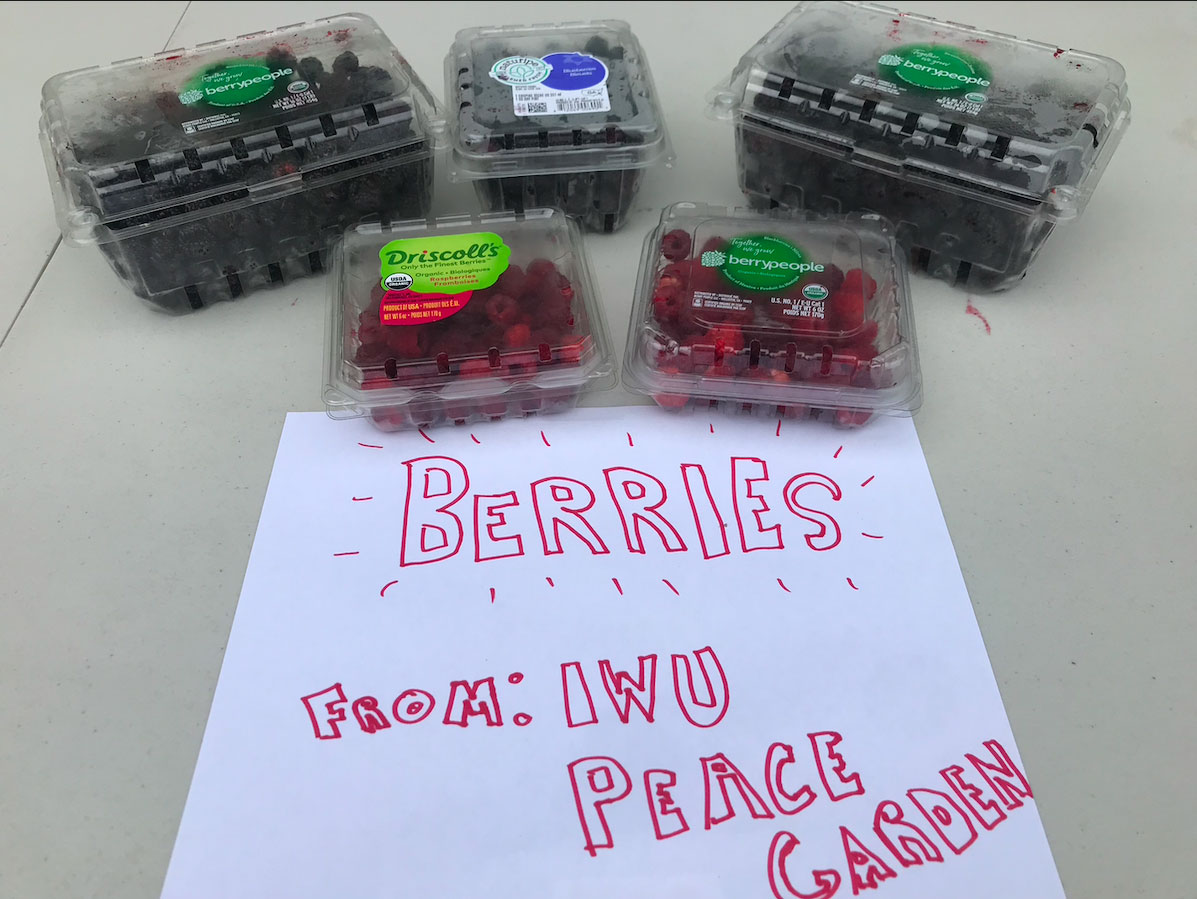 As a kid hailing from one of south Chicagoland’s white suburban neighborhoods, I have always had a proximity to gardens and agriculture. The former were entrapped within stiflingly dull monocultured lawns, the latter, industrialized, rotated year after year between rows and rows of corn and rows and rows of soybeans. Growing food was a thing to be enjoyed from the sidelines, not actively involved in. Those with vegetable gardens were a minority among my peers; the veggies I knew and [begrudgingly] ate were standardized, huge, and blemish free. This is the reality for many, many Americans; less than 2% of the population is formally involved in agriculture, and roughly 80% of Americans live in an urban area.We have, through industrialization (and, contemporarily, financialization) become separated from the land and our food system. Our food system is, for the majority of us, out of sight and out of mind. I’ll let you figure out the merits and drawbacks of this reality for yourself. But I digress.

I speak of my admittedly sheltered experience to better contextualize my time at the Peace Garden this summer. Growing vegetables from seed to harvest is wonderful, fulfilling work that I recommend to anyone struggling with feelings of meaninglessness. As a student, whose achievements and accomplishments are mostly immaterial and abstract, watching a plant that you’ve nourished through your own hard work grow into food is utterly delightful. Here, finally, is material accomplishment!

Day after day I would wake up around 7 a.m. to bike over to the garden and enjoy the rising sun over our plot at 1212 N. Evans St.I would throw on some music or a podcast and water and weed for an hour or two before heading back to make some breakfast. On Thursday mornings, between 8 a.m. and 10 a.m., I would be joined by a half dozen rotating IWU volunteers. Students and faculty alike would donate their time to pull some weeds and harvest some greens, enjoying each other's [socially distanced] conversation or silent company. A few even helped out with a honey extraction from the two hives at the garden and were rewarded with a bottle of honey.

Most of the rest of the spoils went not to the victors but to community members of West Bloomington. Cucumbers, kale, okra, dill weed, raspberries, peppers, tomatoes, basil, and garlic have all been donated through the Veggie Oasis. Getting to be both the supplier and distributor of Peace Garden produce has been a blast; sharing what I’ve grown at the garden with friends, family, and strangers has made the hours of watering and weeding worth it a hundred times over.

Through all the heartbreaking uncertainties of this summer, I was privileged to find solace in a small plot of land in Bloomington, Illinois involving myself in an activity humans have done for thousands of years. I have, happily, discovered nothing new in the task that was laid out for me, other than a profound respect and admiration for farmers and an inner appreciation for gardening. It seems appropriate to summarize my experiences of the ancient practice of gardening with a rather ancient quote: “There is nothing better for mortals than to eat and drink, and find enjoyment in their toil.” My toil at the Peace Garden has been enjoyed fully.