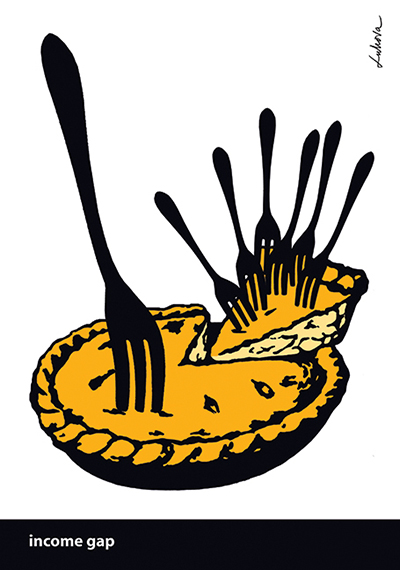 With bold colors, minimalist style and powerful messages, Lukova’s artwork highlights concerns regarding income inequality, oppression of women, military stockpiling and other pressing dilemmas in our world today. She is speaking in conjunction with an exhibit on display in IWU's Merwin Gallery through Feb. 22, "Women's Rights Are Human Rights: International Posters on Gender-based Inequality, Violence and Discrimination.”

Lukova’s work is prominently featured across the country, from the Library of Congress in Washington, D.C., to the Museum of Modern Art in New York, her hometown after immigrating from Bulgaria. Lukova first became a notable figure in the world of art when in 2008 she released a portfolio titled Social Justice, which made such an impact that the portfolio was featured at an art exhibition for President Obama’s first inauguration.

Lukova’s global audience lends itself to the global topics she faces in her art. Whether a piece comments on health coverage or immigration, her art’s straightforwardness leaves a strong emotional impression that can express “essential themes of humanity,” according to her website. Critics have said her style aims to strike feelings of pain and outrage, which can potentially breathe a new sense of urgency into problems that sometimes seem too distant or too overwhelming to solve.