All chemistry faculty at IWU are professionally active and are engaged in research with Illinois Wesleyan students. Learning is enhanced at Illinois Wesleyan by the quality, individualized instruction you'll receive from our faculty. Our faculty will work closely with you, in and outside of class, in lab, and in collaborative research.

You do not need to be a chemistry major to do research. Please e-mail the faculty directly or stop by their office, should you be in interested in research options. It is advised that you contact faculty a semester prior to when you wish to begin research. 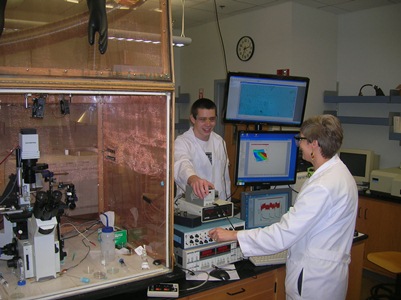 The focus of Dr. Baur’s research is the use of electrochemical imaging techniques to study biosignaling pathways. These imaging techniques use a Scanning Electrochemical Microscope (SECM), a type of scanning probe microscope in which the probe is a microscopic electrochemical sensor. The SECM can be used in three modes. First, it can be used to determine the topography of a surface in the constant distance mode. Cell morphology can be determined and neuritogenesis monitored over time using this mode. Second, when the probe of the SECM is used in the generator mode, it can be used to focally produce products by red-ox chemistry. Reactive oxygen species (ROS) can be focally generated electrochemically at the tip of the probe in this mode. Finally, when the probe is used in the collector mode, it can be used to detect electrochemically active substrates released from a surface. The probe can be used in the collector mode to detect changes in neurotransmitter release from individual vesicles. The three modes of the SECM make it a unique tool for studying the effects of focally generated reactive oxygen species on neuritogenesis and neurotransmitter release from PC12 cells. 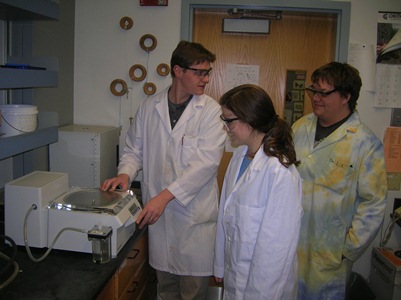 Sickle-cell disease is a genetic blood disorder that is characterized by the presence of sickle-shaped red blood cells in the body.  These “sickled” cells clog small capillaries, leading to severe pain and organ damage.  The disease is caused by a single point mutation in the gene coding for the β-chain of hemoglobin and leads to the incorporation of a valine surface residue in place of glutamic acid.2 Under low oxygen conditions, a binding surface for the valine residue is revealed, allowing for an intramolecular interaction that leads to the polymerization of sickle cell hemoglobin and results in malformation of the cell.  Despite the fact that the molecular mechanism of SCD is well understood, no effective treatment exists.  Therefore, the development of molecules capable of preventing sickle-cell hemoglobin (HbS) polymerization would be highly desirable. The research in the Brennan laboratory focuses on using modern screening and selection strategies (phage display libraries and one-bead-one-compound combinatorial libraries) towards the discovery of HbS ligands capable of disrupting HbS polymerization.

Environmentally Friendly Organic Synthesis Using Bismuth(III) and Iron(III) Compounds as Catalysts: The Mohan group is interested in developing green synthetic organic methodology using bismuth(III) compounds as Lewis acid catalysts. Bismuth compounds are remarkably nontoxic (for example, most bismuth compounds are even less toxic than NaCl) and inexpensive. Most bismuth(III) salts are fairly tolerant of small amount of moisture, making them easy to handle. The reactions studied in the Mohan laboratory fall into three main areas: (i) Carbon-carbon bond formation via allylation of aldehydes, ketones, acetals, and imines. (ii) Protection-deprotection chemistry: the development of mild, chemoselective protection-deprotection methods for a variety of protecting groups including acetals, THP ethers and silyl groups.  (iii) Synthesis of heterocycles with biological activities.

Ionic Liquids as Novel Solvents for Organic Synthesis: Research in this area focuses on the use of ionic liquids as alternative solvents to Volatile Organic Compounds (VOCs) for use in organic synthesis. The lack of significant vapor pressure and lack of flammability of bulk ionic liquids makes them safer to use than volatile organic compounds. An important focus of this research is to see how reaction pathways change in ionic liquids. Mohan and coworkers have demonstrated unique pathways with allylation of acetals in ionic liquids.

Isolation of Natural Products: The Mohan group is interested in developing simple ways to isolate natural products with medicinal properties from herbs and spices.  Many of these protocols have also been modified and developed as laboratory experiments for sophomore organic chemistry.

First, astrochemistry, which is a relatively young field of research, addresses a gap in our understanding of molecular evolution in space.  The current laboratory data are inadequate for identifying (1) most of the molecules and (2) many of the molecular processes at work in the interstellar medium (ISM).  For instance, we do not yet understand the chemical processes associated with the creation and evolution of even the most basic molecules such as water and methanol in space.  An important step toward understanding the chemistry of the ISM is to identify, through laboratory and theoretical work, a list of molecules that are present in the ISM.  Perera group’s research focuses on contributing to this list through studies of ion-neutral reactions that are likely to be the dominant reaction processes in the cold cores of interstellar clouds.  For this purpose, Perera group is building a specialized ion beam instrument at IWU with an ion trap and time-of-flight mass spectrometer.  When the instrument is built we will be able study reaction dynamics of various ion-neutral reactions and contribute to astrochemistry by identifying molecules that may exist in the ISM and by providing an understanding of the reaction mechanisms relevant to these molecules.

Second, studies related to antioxidant in plants.  Polyphenols in plants can offer many health benefits. These polyphenols are called antioxidants by consumers and theses particular types of molecules are advertised by the tea and wine industry in many of their commercials. In our lab, we studied how fermentation of tea affects the antioxidant content and reactivity. In addition, various additives (fruits or spices) are added to enhance the taste of black and green tea.  Studies have shown that addition of milk results in decrease in antioxidants.  Therefore, we are exploring the effects on tea due to various additions.  We are extending this study of teas into another plant-derived product, wine. It is known that grapes contain similar antioxidants to tea and a few others that differentiate from tea. We would like to identify these antioxidants, quantify and measure their reactivity, based on the type of wine. The type of wine will range from white to red, as well as wine coming from different types of grapes.

The interactions of gaseous compounds with water have wide ranging applications in thermodynamics and kinetics.  Highly precise measurements of the solubility of gases in water at varying temperatures provide a route for the determination of the enthalpy, entropy, and heat capacity changes for solution. These data in turn provide necessary tools for modeling the changes in the structure of water upon incorporation of small mole fractions of solutes. When the dissolved gas includes NOx, the solutions formed also react with near ultraviolet radiation to form hydroxyl and other radicals. When organic scavengers are added to the aqueous solutions formed from NOx, one has a robust model system for aerosols and natural ground water in a polluted environment. Rate constants and quantum yields determined from these model solutions play a key role in better understanding the more complex real world systems.

Polyoxometalates (POMs) are large, early-transition-metal oxide clusters that are widely studied owing to their catalytic and biological activity. But, because of their large size, POMs were historically outside the scope of anion recognition chemistry. Recently, however, there has been growing interest in the interactions between POMs and various organic molecules and solid supports. The Roesner group designs macrocyclic and polymacrocyclic receptors as hosts for POM guests. In these receptors, metallated crown ether moieties or protonated aza-macrocycles serve as pre-organized points of positive charge for coulombic interaction with the POM guests.  The Roesner group is also interested in using the POM forms of anion exchange resins as oxidation catalysts and in attaching macrocyclic POM receptors to solid supports.  In addition to their work with POMs and macrocycles, Dr. Roesner's group works with Dr. Thushara Perera (IWU Physics) to prepare mineral dusts for astrochemically relevant IR studies and has developed multi-week student laboratory projects on topics including ferrocene and biodiesel fuel.