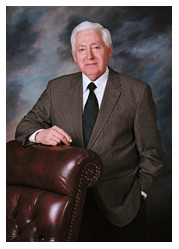 For many IWU political science students, law school will be the next step in pursuing a career after their undergraduate years. In addition to IWU Law Society and other resources, the political science department strives to create opportunities for students to learn more about a career in law.

This year, the political science hosted a guest speaker who has been an Illinois lawyer for over fifty years, Peter Ferracuti. Ferracuti discussed his own experiences with law and was available to answer students’ questions about what it is like to be a lawyer. One student noted that Peter Ferracuti’s talk was one of the most valuable on-campus extracurriculars for her time at IWU, because it allowed her discuss the law with other students in a new context.

Ferracuti also has a special link to campus, and in particular to the political science department, thanks to his daughter Alexis (’11), a recent graduate in political science and philosophy. Like Alexis, many of IWU’s political science majors in the Class of 2011 will be pursuing a law school track, so this campus event was an excellent opportunity to hear about law school in the eyes of one who has a wealth of knowledge and experience.