BLOOMINGTON, Ill. – This year’s annual Dr. Martin Luther King Jr. Teach-In featured keynote speaker Sundiata Cha-Jua, Associate Professor of History and African American Studies at the University of Illinois Urbana-Champaign. His presentation entitled “Dr. King: Who Was He Really?” explored the history of the reparations movement as it relates to the evolution of Dr. King and his ideologies. The Teach-In took place on Wednesday, January 22, 2020, from 11 a.m. to 1 p.m. in the Illinois Wesleyan University Hansen Student Center. The Teach-In was free and open to the public.

Professor Sundiata Cha-Jua earned his Ph.D. from the University of Illinois Urbana-Champaign History Department in 1993. Prior to that, he earned Advanced Certificates in Black Studies from Northeastern University and from the National Council for Black Studies, Director’s Institute.

The keynote presentation followed the changes experienced by Dr. King in the last years of his life and looked at the relationship between these changes and the black nationalism of the period. The end of King’s life was focused on financial issues, including obtaining better wages for municipal workers and reparations for African Americans wronged during World War II. Cha-Jua remarked that Dr. King confronted President Johnson by saying we are going to Washington to pick up our check because the dream has been deferred and the dream has been denied.

Held annually, the Teach-In honors Dr. Martin Luther King,Jr., who spoke at Illinois Wesleyan in 1961 and 1966, his only visits to the Bloomington-Normal community. 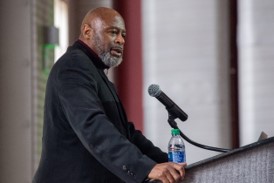 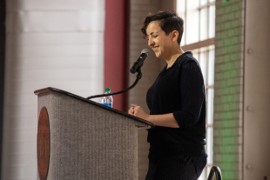 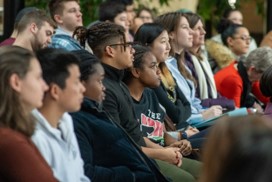 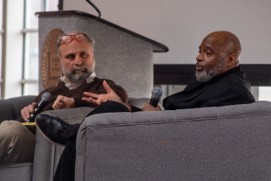 Q&A session with U of I Professor Sundiata Cha-Jua and IWU Professor Jim Simeone. 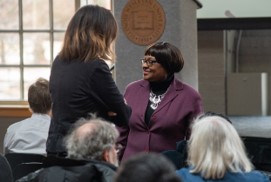 Linda Foster, President of the Bloomington chapter of the NAACP.