Welcome to the 2013 King Day Teach-In. I am Jim Simeone, and it is my pleasure to introduce our first panel on the issue of prison reform and human rights.

That title is especially appropriate because this year the university has featured a cluster of courses organized around the theme of Making Human Rights Real.

As Andrew Clapham writes in his book that we will be discussing at 3:00 p.m., “the human rights project is often about securing rights for those who have been marginalized and made vulnerable.”  And among the most marginalized in our society are those who are in or have just been released from our prisons and jails.

The teach-in is sponsored each year by Pi Sigma Alpha (the political science honor society) and by the Action Research Center (ARC). ARC is committed to partnering with groups in the community who work on social justice issues, and this year our program is co-sponsored by the Central Illinois chapter of the American Civil Liberties Union (ACLU). The ACLU is also sponsoring a talk at 7:00 p.m. tonight at the Normal Public Library, for those who do not have the day off and could not attend this teach-in.

It is appropriate for us to be thinking about human rights and prison reform because King was such a tireless advocate for reform in all aspects of our democracy. ARC likes to pair local, national, and international reform movements, and we do so today. The 2:00 p.m. panel will feature the efforts of the Scholars at Risk program and the Peace Fellows to advocate for dissident prisoners in China and Russia. But it is also appropriate for us to pair international prison reform and Illinois because on this “glocal” issue—as Professor Gearhart likes to put it—Illinois has been a world leader, as it was, for example, in 1899 when the first juvenile court in the world was created in Chicago by Jane Addams and her allies.

The effort of prison reform has a long way to go in Illinois, and we cannot simply rely on time to bring about change, but we must partner, organize, and act. This was the theme of King’s 1965 speech at IWU. Let me quote from that speech directly.

I reject, he said, the idea that we should “just be patient and wait 100 or 200 years and the problem will work itself out. I think there is an answer to that myth. That is that time is neutral, it can be used either constructively or destructively. …Somewhere we must come to see that human progress never rolls in on the wheels of inevitability. It comes though the tireless efforts and the persistent work of dedicated individuals …And without this hard work, time itself becomes an ally of the primitive forces of social stagnation. ...And the guardians of the status quo are always on hand with their oxygen tents to keep the old order alive. ...And so it is necessary to help time and to realize that the time is always right to do right. ...And so a strong action program will recognize the need for legislation to deal with many of the ills that we still face. And along with this, is the need for nonviolent direct action.”

With that in mind, let me introduce our first speaker, who is John Maki, the executive director for the John Howard Association. Mr. Maki and John Howard have been working hard to fan the flames of change in our prison system. Their prison monitoring project has been critical to the effort. Their 2012 report on the Tamms Prison, for example, documented many human rights abuses, including excessive use of solitary confinement, and has spurred calls for closing the prison. John’s talk is titled “Where fantasy and reality collide: the state of Illinois prisons and criminal justice reform.” Please join me in welcoming John Maki. 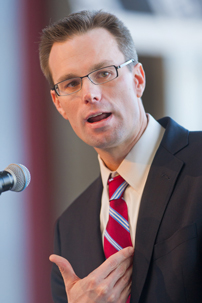 John Maki is the executive director of the John Howard Association of Illinois. He spoke at the 2013 Martin Luther King Jr. Teach-In on the topic of Prison Reform in Illinois. 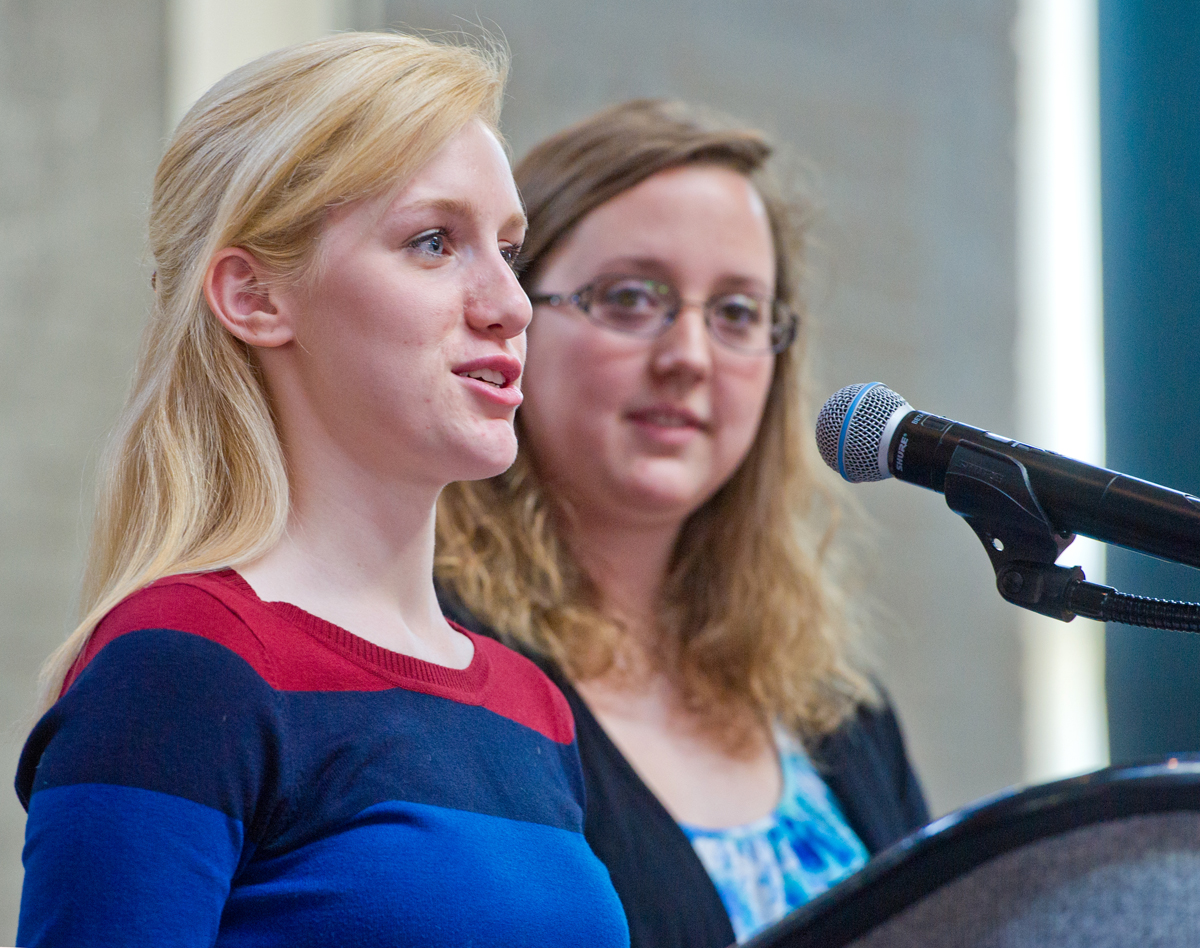 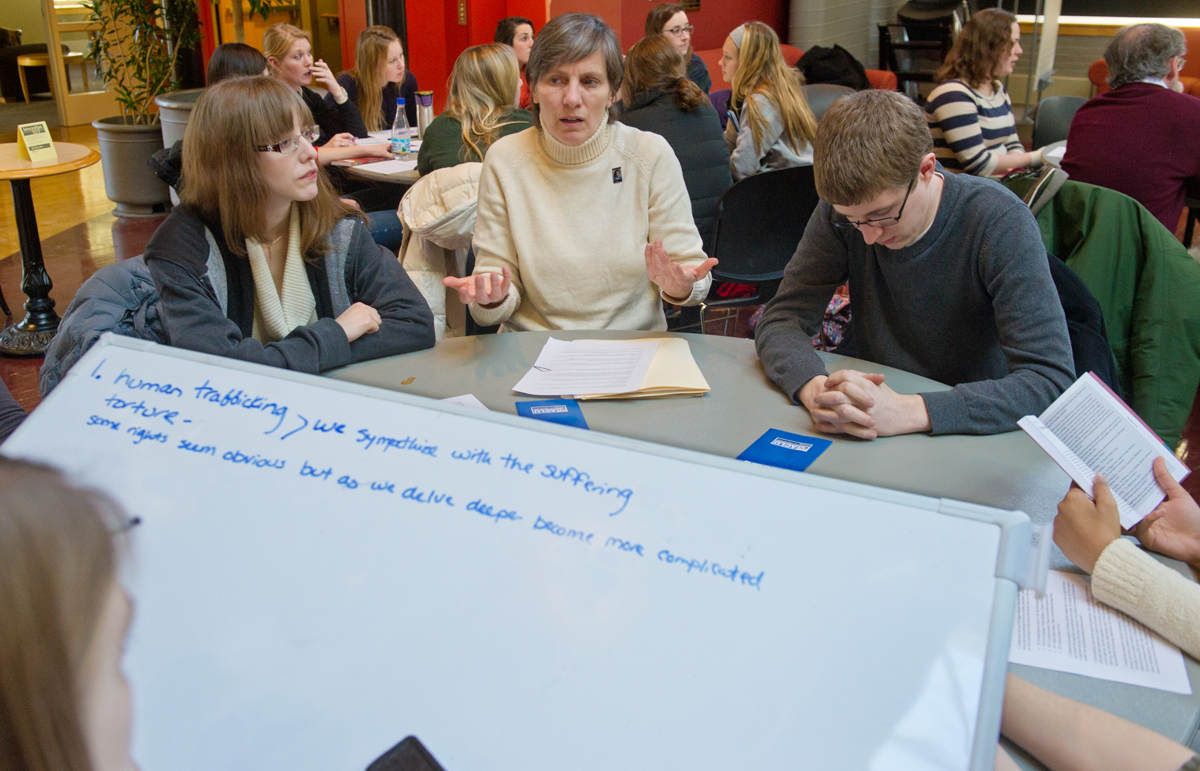 Professor Carolyn Nadeau discussing the text A Very Short Introduction to Human Rights by John Clapham, a book purchased through an ARC grant and distributed and read by over 90 students across campus. 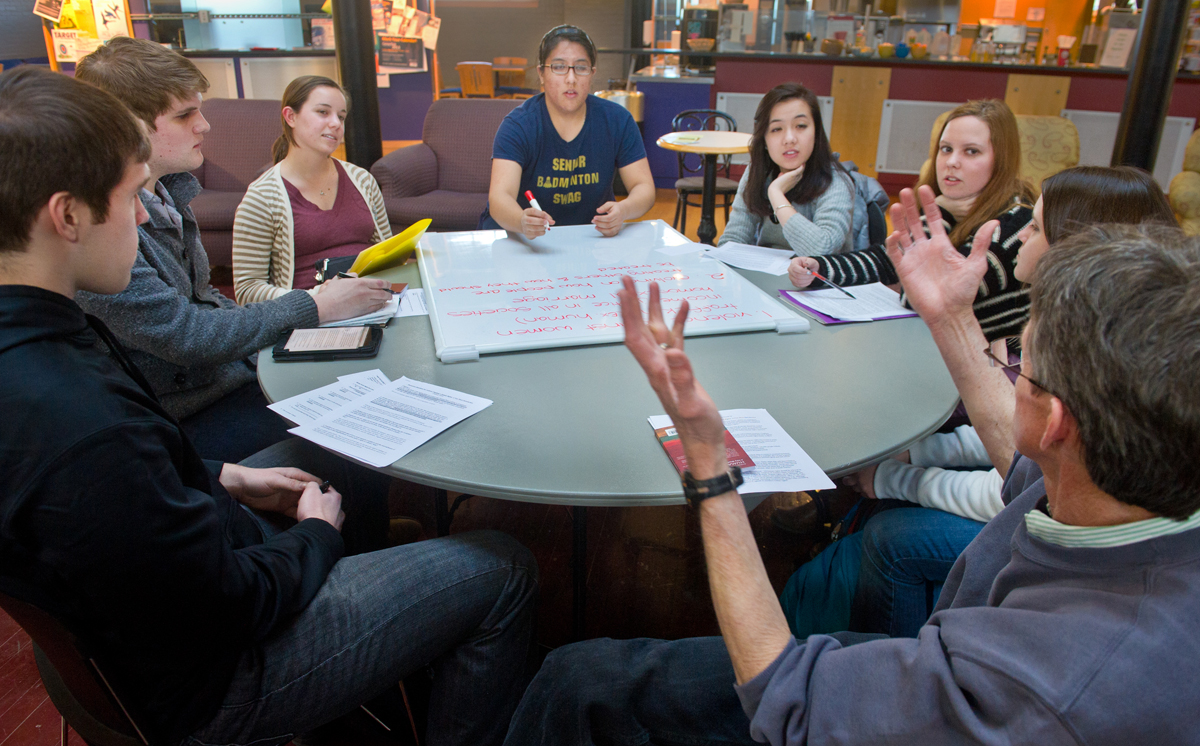 Professor William Munro discussing the same text with students. For the 3:00 p.m. session, students gathered at tables to discuss the book and then shared their reflections with the whole assembly.