The thesis is an original, year-long research project for academic credit, supervised by a faculty member. After planning a research project, each student involved in the program will carry out the research and analyze their data. The student then has the opportunity to present the study at the  John Wesley Powell Student Research Conference  at the end of their senior year. 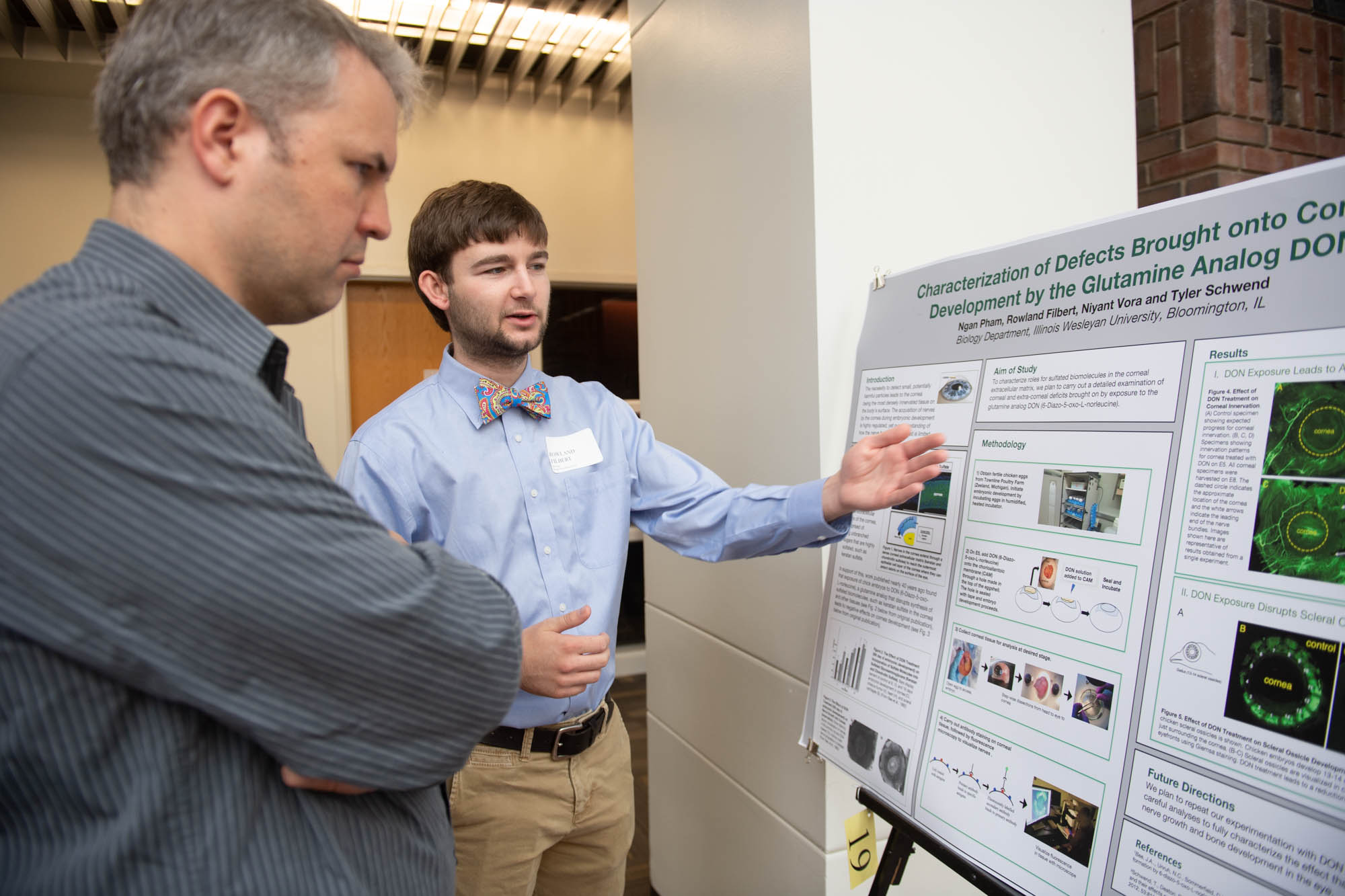 by Rowland Filbert, Ngan Pham, Niyant Vora
Faculty Advisor: Tyler Schwend
Description: The cornea is the most densely innervated tissue on the body’s surface. The acquisition of nerves by the cornea during embryonic development is highly regulated. Past work in the lab suggests that the movement of nerves into and through the cornea may be influenced by the dense extracellular matrix of the cornea, comprised of long unbranched sugars called glycosaminoglycans (GAGs). Intriguingly, work published nearly 40 years ago found that exposure of chick embryos to DON (6-Diazo-5-oxo-L-norleucine), a glutamine analog that disrupts GAG synthesis in the cornea, leads to negative effects on cornea development. Here, we carry out a detailed characterization of corneal and extra-corneal deficits brought on by exposure to DON. Herein, our findings show that DON negatively influences development of eye structures, resulting in smaller eyes with abnormal corneal innervation and fewer scleral ossicles (bones formed around the cornea).

Task Specificity and Functional Outcome: What is best for Post-Stroke Rehabilitation?

Abstract: Stroke is a debilitating insult to the brain occurring from a blockage in blood supply (ischemic), or a bleed (hemorrhagic) in one hemisphere of the brain. Worldwide, approximately 10 million people are left with moderate to severe disability due to stroke; the most common deficit is upper extremity impairment. Current stroke rehabilitation strategies utilize task specific training of a skill, meaning one practices the specific skill they want to regain. However, it is possible that there are more generalized types of therapy that can be as effective in rehabilitating debilitated skills. The current study utilizes several skilled reaching tasks in mice which show striking parallels to human dexterous movements in order to observe the effects of task-specific versus generalized upper extremity rehabilitation post-stroke. Our findings through statistical and kinematic analysis have implications that task-specific rehabilitative strategies may promote more true recovery than compensation due to the lesser degree of abnormalities in movement post-training as compared to generalized therapy and control groups. Findings also support the validity of a skilled reaching task used in the rodent model; however, further studies and analysis are necessary.

On the Nature of Synesthesia: A Learned Association or Something Different?

Abstract: Synesthesia is a phenomenon that has captivated the interest of many researchers, as it is a unique experience of the blending of the senses. The following study was conducted in an effort to understand whether synesthetic experiences can be learned, as Bor, Rothen, Schwartzman, Clayton, & Seth (2014) claimed. While there has been much research demonstrating that synesthesia is more common in the population than previously thought, and likely to develop in young children as a learning mechanism (Watson et al., 2017a), there have not been as many event-related brain potential (ERP) studies conducted on synesthesia. ERP studies are important for synesthesia, since neural phenomena are often best measured through brain monitoring technologies, such as magneto/electroencephalography (MEG/EEG), ERP, functional Magnetic Resonance Imaging (fMRI). The current study utilizes the measurement of continuous neural data through a pre- and post-test ERP study monitoring changes occurring at the Pz electrode site for the visual N100, auditory N100, and the P300 ERP components in 15 neurotypical, non-synesthetic college-age adults. The goal of this study was to understand whether non-synesthetes can have a synesthetic experience or are merely forming a learned association after 4 weeks of grapheme-color task, and chromesthesia task training. The results show that while participants can be trained to form learned associations between letters and colors, and sounds and color as shown by a significantly reduced P300 amplitude, they do not seem to have synesthetic experiences as was previously indicated—as demonstrated by the nonsignificant change in both N100 components.