A Day to Remember

As Mother Nature delivered a picture-perfect day for Commencement 2017, some 400 graduates and their guests honored venerated traditions and toasted new beginnings.


When college days are fully past and gone,
While life endures from twilight dream till dawn,
Grandly thy soul shall with us linger on —
Star-crowned our Alma Mater Wesleyan!

As the Class of 2017 stood to sing “Alma Wesleyana” for the first time as IWU graduates at the close of May Commencement exercises, it felt like the perfect ending to one of the most gorgeous graduation days in recent memory.

Written in 1935 by IWU Professor W.E. Schultz, “Alma Wesleyana” was just one of the traditions remembered during the University’s Commencement, held May 7 on the Glenn ’22 and Rozanne Parker Kemp ’27 Commencement Plaza in front of State Farm Hall. In greeting the more than 400 new Illinois Wesleyan graduates and their families and friends, Board of Trustees member David Wilkins ’74 reminded the audience of long-held core values embraced by the University. Those include striving to help students develop the intellectual and moral capacity to think deeply about the important things in life and to live in a manner that is consistent with the values reflected in the University’s motto Scientia et Sapientia, generally translated as “knowledge and wisdom.”

Wilkins also quoted the late John Glenn, astronaut and U.S. Senator: “If there is one thing I’ve learned in my years on this planet, it’s that the happiest and most fulfilled people … are those who devoted themselves to something bigger and more profound than merely their own self-interest.” Wilkins said he hoped the graduates would strive to live with care and commitment to things larger than their own self-interests and create a future of greater knowledge, wisdom, and fulfillment.

Representing the faculty, Student Senate Professor of the Year Carolyn Jarvis also congratulated the graduates and encouraged them to take a long view in pursuing a career. A first job is important and exciting, she said, but it may not be a career.

A nursing student, Jarvis said she had secured a position at Northwestern Hospital in the fall after her own graduation. While she was still a student, however, a recruiter from Lake Tahoe, Nevada, visited her college, and she found herself signing up to learn to deal blackjack in a casino.

“That summer job taught me a number of valuable things,” Jarvis recalled. She found she loved nature, the San Francisco art scene, and that she could travel alone and make new friends. The third thing she learned, she said, “is that the odds are with the house, and as a result, I have never gambled as a customer.”

In addition to a career as a nurse practitioner and nurse educator, Jarvis said she has also spent most of her career writing textbooks and articles. She owed her first article, she said, to an office colleague who passed an opportunity to write an article on physical examination to Jarvis. “When opportunities come up, take the risk, and grab them,” said Jarvis, who is the author of North America’s most widely used health assessment textbook. “Remember, you have 45 years in your career. Relax and enjoy each one.”

Class President Marissa Cozzi ’17 spoke on behalf of the graduates. She said throughout their time at IWU, her classmates were given the opportunities not just to find themselves, but to actually create themselves.

“Over the last four years, we have made connections that will last a lifetime, shared endless laughs, memories, and a lot of stress,” Cozzi said.

“But after all this, we learned that if something is important to you, you will find a way; if not, you will find an excuse,” she said. “This ceremony is called ‘commencement’ for a reason. The fundamental definition of commencement is ‘a beginning or start.’ This is the beginning of the rest of our lives, and no matter where life takes us, we are always welcome home to Illinois Wesleyan.”

During the ceremony, an honorary doctor of humane letters was bestowed upon Samuel Porritt III ’84. He is founder of the Falling Forward Foundation, the only nonprofit organization in the U.S. that funds the continued rehabilitation of patients recovering from catastrophic medical issues after insurance stops paying. Porritt started Falling Forward after spending two years in extensive rehabilitation to recover from a spinal cord injury. (Read more about Porritt on page 11.)

Kathleen M. Murray ’79, the president of Whitman College in Washington, also received an honorary doctorate before giving the Commencement address. A music major at Illinois Wesleyan, Murray spent 19 years at Lawrence University as piano faculty member and administrator. She served as provost and dean at Macalester College for seven years before becoming president of Whitman in 2015. Murray based her Commencement remarks on a quote from Eleanor Roosevelt: “The future belongs to those who believe in the beauty of their dreams.”

Murray noted that as she was sitting in the same place as the graduates 38 years ago, “I didn’t allow myself many opportunities to dream in those days. I was a first-generation college student, from a totally blue-collar family in Davenport, Iowa … and had absolutely no idea what I might do next.”

Murray said she may not have been a big dreamer as a young adult, but she was a big believer. She said her parents had instilled a belief in their five children that they could do anything they wanted as long as they were willing to work really hard.

She said she hoped the graduates all shared the belief that hard work would open the door to great opportunities. Those dreams are especially important, she said, in moments of uncertainty and challenge.

“You are graduating from college at a time of significant uncertainty and challenge around the globe,” said Murray. Turning inward to just take care of yourself, she said, will close you off from all of the possibilities that are not apparent, except in your dreams.

She told those assembled that two ideas are important for all college graduates at this particular moment in time. One she hoped the Class of 2017 would continue to pursue, she said, and the other she hoped the graduates would avoid.

“I urge you to continue to develop your capacity for empathy, for the ability to understand, even to share the feelings of others, to experience life as if you were standing in someone else’s shoes,” she said. The Illinois Wesleyan experience helps build this capacity, she said, as students live and learn “with people from different parts of the country and the world, different racial and ethnic groups, different socioeconomic backgrounds, different political and religious views,” she said. “Our ability collectively to make the world a better place depends, at least in part, on having the courage to combat evil by displaying imaginative empathy.”

Murray urged the graduates to avoid cynicism, which derives from a belief that people are generally dishonest and motivated solely by self-interest. “I work hard, even if I am not always successful, to base my work on the assumption that people are looking out for the best interests of others, and I hope people will give me the same benefit,” said Murray. “The distrust and disillusionment that results from cynicism squashes creativity of thought, and creativity is essential if we are to make the world a better place.”

Also observing the word “commencement” means “beginning” or “start,” Murray noted the graduates are beginning the next phases of their lives and figuring out what that means and what the future might hold. “The educational privilege you have experienced these last four years carries with it enormous responsibility,” she said “Responsibility to give back — to your family, to your college, your community, the world.” 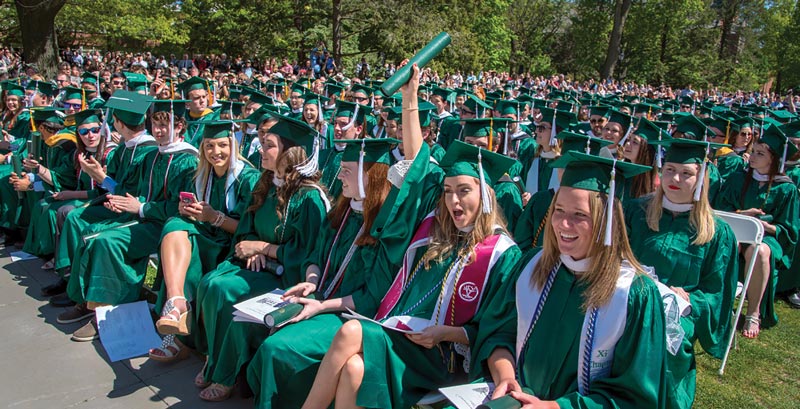 She said she loved her time at IWU, and she told the audience she has loved nearly all of the last 38 years because she has learned to believe in the beauty of her dreams. “I wish the same for you as you commence today,” she said.

President Eric Jensen told the class of 2017 they would hold a prominent place in his memory as the first group he’s had a full year as president to get to know. He described the graduates as “a spectacular group” and said his parting words to them would be simple: “Remember who you are, remember how you got there, and remember Illinois Wesleyan.”