Using her camera as both tool and pathfinder, Anna Kerr-Carpenter '17 visually charted her transformative IWU experience.

She traces the first step in her photographic voyage back to high school and a simple, haunting image of two eyes peering through the holes of black fishnet fabric. Since taking that image, Anna Kerr-Carpenter '17 has trained her viewfinder on a boundless range of subjects, creating portraits of friends and strangers, documenting grave injustices and glad celebrations, and charting the highs and lows of her IWU experience, which concludes in May when she exits the commencement stage, diploma in hand.

Her initial months on campus, she recalls, "were filled with confusion and panic." The self-described "shy girl" from Elk Grove, Calif., says she had no clue then what she wanted out of college. "I wondered if I made the right choice," she says, "and I considered transferring. However, deciding to stay was the best decision I ever made."

She is not the first in her family to make that decision. IWU was where her grandparents, Georgia Ann (Phillips) '54 and Norm Kerr '52, met and fell in love. Their two eldest daughters — Kimberly Kerr '80 (Anna's aunt) and Kathy Kerr-Carpenter '82 (her mom) — also chose Wesleyan. But it was the desire "to go someplace cold" as much as family ties that brought Anna to campus in the fall of 2013, a seemingly random decision that in hindsight feels like destiny. "It sounds cliché," she says, "but in many ways, I didn't choose Wesleyan. It chose me."

While happy to be a legacy student, she says "my time here was completely my own." A defining move was picking her major, anthropology, in her sophomore year. Equally significant was her decision to join IWU Interfaith, later serving as president of the student group that builds bridges between different faiths and non-religious traditions through dialogue and community service. While at Illinois Wesleyan, Anna also became a passionate human-rights advocate. Her 2016 Thanksgiving break was spent in North Dakota at the Standing Rock Sioux Reservation. There, she and two other Wesleyan anthropology majors, joined protests against building the Dakota Access Pipeline on protected reservation land and later shared their experiences to help shore up support on campus for Standing Rock and their cause.

Through it all was her photography — another family tradition. Grandfather Norm was a shutterbug in college, shooting for both the Argus and Wesleyana before moving into a thriving career as creative director of photography for Eastman Kodak (see related story ). His success inspired Anna to make photography her main medium.

Taking School of Art courses in photography and graphic design, she learned both technical skills and how to use images to tell compelling stories. In "Graphic Design III: The Narrative & Design," she was introduced to using photography to tell stories. For the class, she interviewed and photographed IWU students to draw a visual parallel between college living spaces and student-life experiences.

The course led her to anthropology and the study of visual ethnography, using photography to observe and record people, their communities and culture. Guided by Anthropology Professor Rebecca Gearhart Mafazy, a leading scholar in the field, Anna did an especially memorable study of Rebecca L. Dubowe, the world's first female deaf rabbi. Interviewing and observing her at Bloomington's Moses Montefiore Temple, Anna developed what she describes as "a sacred partnership" with the rabbi, "coming to understand each other not only as anthropologist and subject, but also as people."

While using her photography for scholarship, she has also pursued it as a business, combining talents with friends for event and portrait photography, and developing a long list of clients for editorial assignments, including School of Theatre Arts, the Hart Career Center, and the IWU Communications Office. In 2013, she launched Annie M. Photography, doing weddings and portraits with a warmly intimate narrative style. After graduation, she will return to California for the summer and then move to Chicago to pursue her photography business and see where her camera and curiosity lead her next.

The following sample of Anna's photos and text from her blog (at www.anniemphoto.com) is intended to give a glimpse of some key stops on her photographic voyage while at IWU and reveal a process she describes as "discovering what story needs to be told, and how I am best going to tell it."

"My vision is to discover the unseen in my subject, the story and the beauty hiding beneath the surface, and reveal it through my own interpretation." Her hope, as ever, is that her work "transports you." 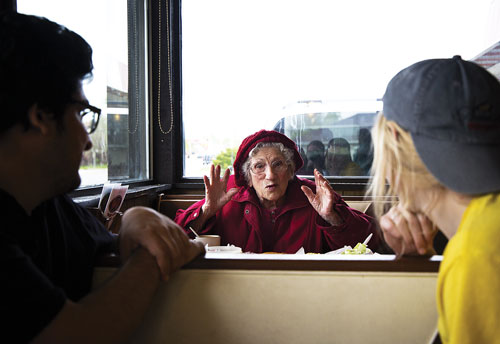 During her 2016 May Term, Kerr-Carpenter took a hiking trip with friends to Matthessien State Park in north-central Illinois. "On our way home, we stopped at a hole-in-the-wall diner for dinner and enjoyed a memorable conversation with a local 90-year-old woman. It was the perfect get-away." The photo, which she titled "Aunt Caroline," won the 2016 School of Art Purchase Award. 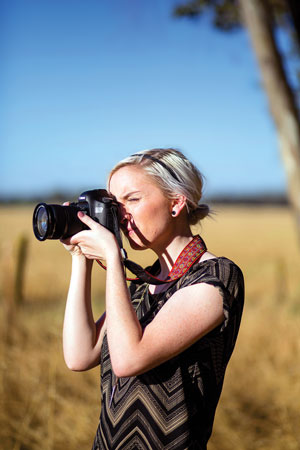 As an anthropology major, Kerr-Carpenter (above) used visual ethnography to assist her research of people and cultures. 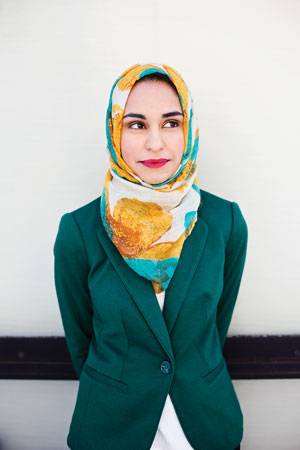 Kerr-Carpenter took this photo of Sana Shafiuddin '17 on a snowy January day. A nursing student, Shafiuddin is also an IWU Multifaith Ambassador who has worked to strengthen the Muslim Student Association. She has also organized campus events to promote better understanding of Islam and to provide help for Syrian refugees. "People like Sana and photo shoots like this one are what make me LOVE being a photographer," Kerr-Carpenter wrote on her blog. 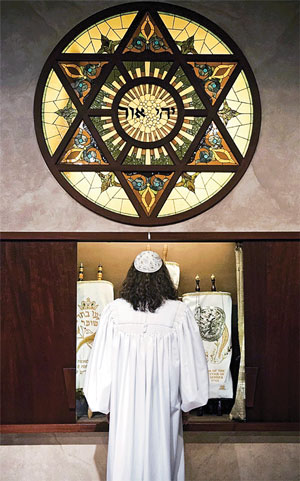 t Bloomington's Moses Montefiore Temple, Kerr-Carpenter interviewed and photographed Rebecca L. Dubowe, the world's first female deaf rabbi. "She taught me to broaden my focus toward her actions in the community and her values of acceptance and compassion," Kerr-Carpenter wrote. 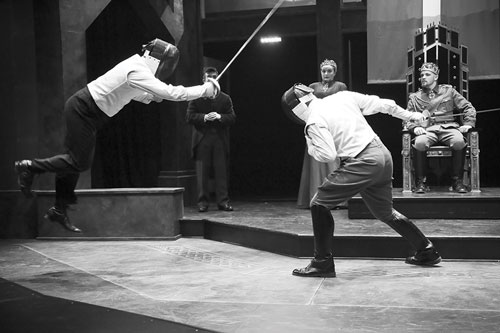 "Hamlet or The Matrix?" Kerr-Carpenter asked on her blog of this photo of a rehearsal from a 2016 School of Theatre production of Shakespeare's Hamlet, which she described as "one of my favorite shows!" 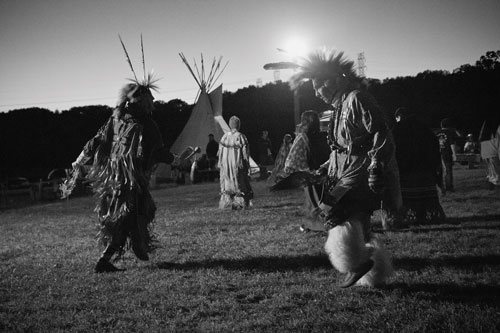 One of Kerr-Carpenter's visual ethnography efforts, for her "Cultural Anthropology" course documented a 2015 Lakota Pow Wow at Seven Circles Heritage Center near Peoria, Ill., held annually in honor of war veterans. It was her second visit to Seven Circles, after participating in an Inipi (Sweat Lodge) ceremony. "I couldn't wait to be back at the facility with some of the most spiritual and generous people I have ever met." 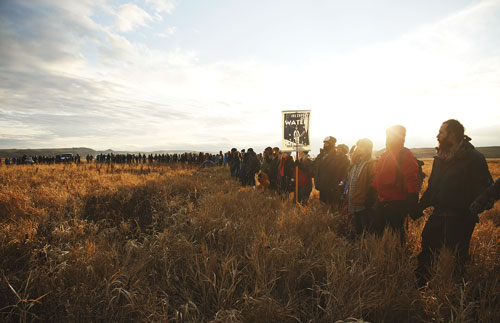 In November, anthropology majors Kerr-Carpenter, Lucy Bullock '17 and Jordan Prats '17 traveled to the Standing Rock Sioux Reservation in North Dakota, where protests against the building of the Dakota Access Pipeline have made national headlines. Tribe officials say the pipeline destroys sacred sites and threatens a river that's a source of water for millions. The students delivered clothes, food, and other goods to the largest camps. On Thanksgiving, the three joined a sunset prayer circle at the base of the Turtle Island burial mound, where Kerr-Carpenter took this photo. 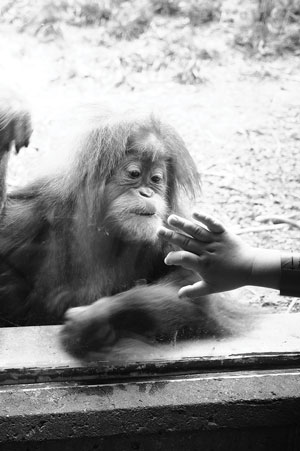 "Turns out non-human primates are just as photogenic as human ones," Kerr-Carpenter wrote about her series "A Day at the Zoo," captured during a visit to the St. Louis Zoo as part of "Primate Behavior," a 2016 May Term course. "I observed the orangutans, and I enjoyed getting to know each resident at the zoo. What I loved the most is witnessing how they are different from humans, but more importantly, how they are not so different at all." 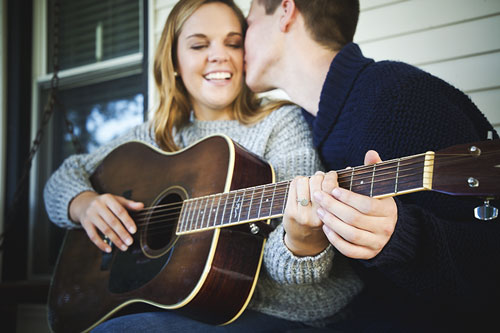 While attending IWU, Kerr-Carpenter launched her own photography business. Among her clients are nursing major Larisa McCoy '18 and her fiancé Austin Savage. "I love capturing candid moments for their beauty, for their humor, and most especially, for their timelessness," wrote Kerr-Carpenter, who will also be shooting the couple's wedding this December. 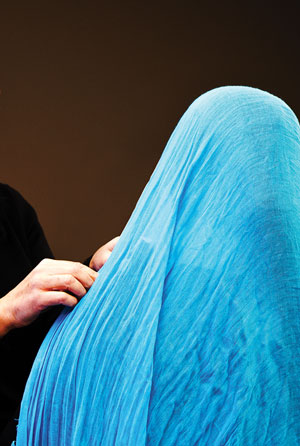 "I call it 'Hijab How-To in Blue,'" noted Kerr-Carpenter in her blog, in which she wrote extensively about the experience of wearing the traditional Muslim scarf for the first-ever World Hijab Day on February 1, 2016, at the encouragement of a devout Muslim student who Kerr-Carpenter met through the campus Interfaith group as a way to help "broaden people's horizons by inviting them to learn more about many different traditions and not just her own." Looking in a mirror after putting on a hijab for the first time, Kerr-Carpenter felt surprisingly emotional. "Perhaps it was the shock of seeing myself in something so laden with religious significance. A wave of appreciation washed over me and I thought to myself, 'This feels right regardless of its social connotation.'" 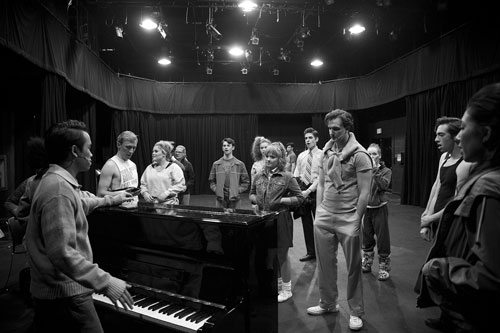 Cast members await their cue backstage at the Jerome Mirza Theatre during a final dress performance of the School of Theatre Arts production Fame: The Musical. 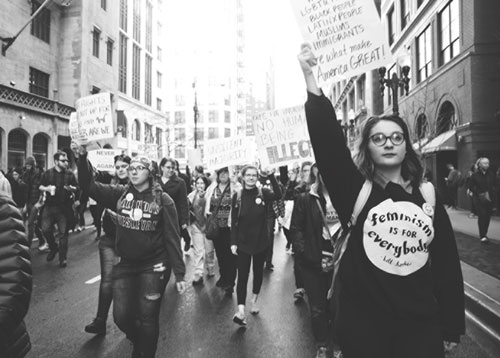 Kerr-Carpenter and several other IWU students joined the Women's March that filled the streets in Chicago and cities around the world just one day after the Presidential Inauguration of Donald Trump. "I was inspired and empowered by the solidarity, strength, and graciousness of all in attendance, including the law enforcement," she wrote in her blog. "...And I am honored and humbled to be a part of it and capture what I saw."

This photo was chosen as a College Finalist in a 2016 contest sponsored by Photographer's Forum. “Cocoon,” a photograph by Anna Kerr-Carpenter ’17, won the Dyke Alumni Award during the 30th annual Juried Student Art Exhibition and BFA/BA Senior Art Exhibits. Calling the photo a “self-portrait of sorts,” Kerr-Carpenter is underneath the blanket. The photo represents the desire “to crawl into a cocoon of blankets away from the world when things get stressful or scary, but always re-emerging renewed, like a butterfly,” Kerr-Carpenter said of her inspiration in setting up the shot.