An excerpt from Jac Jemc’s award-winning novel, My Only Wife 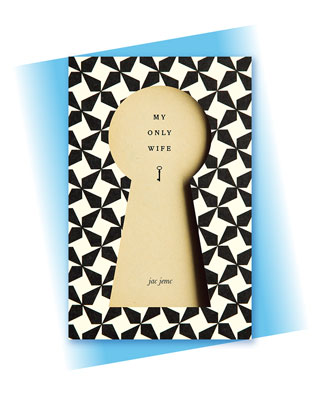 Jac Jemc ’05 began her first novel, My Only Wife, as an Illinois Wesleyan senior. In 2013, it was named a finalist for the 2013 PEN/Robert W. Bingham Prize for Debut Fiction and winner of the Paula Anderson Book Award. “The heart of the book is that this man’s wife is gone, and he doesn’t know what’s happened to her, and he’s so frozen with grief that he doesn’t try to find her. He just retells their stories and tries to determine if she was different, maybe, than he thought she was when they were together.” Here's an excerpt:


My wife made a feast of a dinner.

I arrived home late and she was lying on the couch listening to her warped records.

I saw the table elaborately set. Candles had burned to stubs in the candlesticks.

My wife didn’t even look up when I opened the door. She stared into the space ahead of her.

I smelled the faint scent of something rich and gourmet. I realized the food must be cold.

The smell was what had soaked into the textiles of the room.

The smell of chopped and sautéed vegetables clung to the simple black tee shirt my wife wore as she laid on the couch. Her pants were in a puddle on the ground beside her. My wife’s legs leaned on each other, knock-kneed and tired.

The aroma of white wine drifted from the tablecloth, where I saw one of the goblets had been spilled, still laying on its side.

A bowl of fruit sat in the middle, colorful, but whole and unscented.

“Something smells delicious,” I said, trying to cover up the fact that I knew I was late.

On the couch my wife continued to stare straight ahead.

“I didn’t know you were making such a fancy dinner tonight. What’s the occasion?” I said this in a way I hoped sounded appreciative and excited, rather than defensive.

I knew it was not one of our birthdays, our anniversary, or Valentine’s Day. This must have been a reasonless act of love and I had come home late, hadn’t called.

Now I think, But how was I to know? She hardly ever made dinner.

To this I had no response. I had made no indication that I assumed she would be. She knew me too well. She could tell that my careful responses were apologetic rather than unknowing. I said nothing.

“Sit down here by me,” she said, scooting her legs up further.

I sat down by her feet, ran my hand from her knee to ankle repeatedly. I gave in like I always did. “I should’ve called. I’m sorry.”

“Not a big deal.” My wife smiled. “It was a silly idea I had. I thought I might try my hand at cooking a nice, fancy meal for the two of us. I can warm it up. Sit here by me for a while.”

“Were you going to paint the table after we ate?”

“I hadn’t even thought of that. I guess all that food’s still good for something. I could finally make that painting I’ve been going on and on about. Eh, I’m tired. It’s exhausting cooking a feast. Rest here with me and we’ll get to work in a minute.” Her eyes glazed again.

I was still uncomfortable. “Did you spill that wine glass on purpose?”

My wife looked at me confused, started to sit up and turn around. “Did one of the wine glasses spill?”

“You didn’t notice?” I asked. I assumed she’d knocked it over after having been seated at the table waiting for me a minute too long.

Her head turned, her eyes were trained on the spilt wine. I heard her suddenly smell it with a strong sniff. “No. When could that have happened? We need to clean that up before it stains the wood.”

“I’ll do it,” I said, standing, patting her knee. I crossed to the table and began to remove the settings, the plates of food.

My wife turned to watch me. “How could that have happened?” she repeated.

I finished clearing the table and bundled up the tablecloth. I dumped it in the hamper, but the wet spot had whitened the wood in an oddly-shaped splotch already. “Maybe the glass wasn’t flat on the table; maybe half of its base was on a piece of silverware or something. It could have tipped anytime. Maybe when I came in.” Whenever we shut the door, the whole apartment shook.

I went into the kitchen to get a rag and some Pledge.

I heard my wife hum along with the record.

I rubbed at the splotch, but the white darkened only a shade to pale brown, still distinguishable from the rest of the table.

She stood, peculiarly still and meditative. “How odd,” my wife said softly. It didn’t feel like she was talking to me.

I walked into the kitchen and called to her. “I’m gonna start warming this up in here, alright?” I worked to restore the food to its original grandeur, added a few spices of my own, and my wife eventually joined me, watched me work while she leaned against the sink.

We ate the meal standing at the counter. We never returned to the dining room, never even settled at the kitchen table. We cracked into the lobster on its platter, which was balanced on the burners of the stove. We ate the vegetables from the large bowl I microwaved them in. We pulled off chunks of bread I had warmed in the oven, slathering on butter straight from the wax-paper covered stick, with dull knives. I poured another glass of white wine for each of us and we drank them down quickly; we poured again.

When we had demolished the countertop, the wreckage was severe. It looked as if an army of hungry scavengers had invaded our kitchen.

It was then that we sat down at the table and each pulled a piece of fruit from the bowl.

I took an orange, deftly peeling the skin off in two pieces.

My wife took an apple. She ate it with a knife in hand, slicing off chunks, piece by piece, instead of just biting in. The knife would meet her thumb, and I would watch for blood each time, but she remained unscathed.

We traded with each other, placing slices into the other’s mouth.

When we finished our fruit, I asked her, “Sure you don’t want to do a modern still life of this mess on the counter?” She looked tempted for a minute, but then I saw artistic ambition give way to the urge to have everything tidy again. She shook her head. We slid lobster carcasses into the trash. We wrapped up the remaining bread. We put the leftover vegetables in Tupperware. We poured out the little wine that was left in the bottle between our two glasses. I washed the dishes; she dried and put them away.

We wandered back into the living room. My wife eyed the spot on the table. “Did you try to get this out?”

“This is the best that can be done?”

I nodded the truth.

Return to the main story.