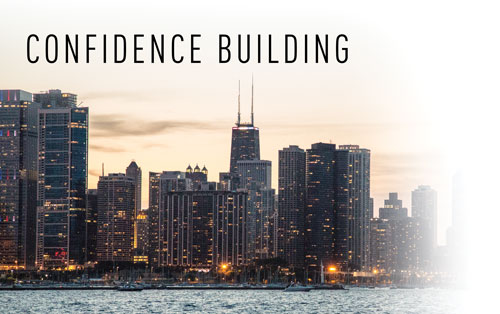 With alumni as their guides, students experience the career potential of  one of America’s largest cities.

Thousands of Illinois Wesleyan alumni have chosen Chicago as the launch pad for their post-graduation lives and careers. But navigating and succeeding in America’s third biggest city can be a daunting challenge.

Some 30 alumni joined forces to help ease that transition for 21 current students during a visit to Chicago during spring break. Over four days, students and alumni met at downtown offices, including Google’s Chicago headquarters, and in small social gatherings — exchanging ideas, information and experiences with the common bond of being Titans.

The University’s Hart Career Center staff collaborated with alumni to organize the trip, and Career Center staff also accompanied the students during their Chicago visit, along with two faculty members from the Business Administration Department. Dubbed the Career Immersion Excursion (CIE), the program is supported by the family of Cathy Carswell ’65, an Illinois Wesleyan trustee. Students contributed only $200 each toward program costs, which include hotel accommodations, meals, programs and transportation.

That investment had already yielded dividends for four student participants who have been offered internships as a result of their meetings with alumni.

Current funding for the program extends to 2020. Next year’s career excursion — this time to be held in Washington, D.C. — is in the early planning stages.

Tara Adams, a junior business marketing and art major, said the CIE experience gave her “the knowledge and resources to be confident and successful when searching for internships and careers.”

Business marketing major John Shipman ’17 delivered an even more emphatic endorsement: “If you are a business student at IWU, the only reason you wouldn’t want to attend the CIE is because you don’t want to better yourself, plain and simple.”

The inaugural CIE focused on entrepreneurship and the fields of marketing and public relations. While the majority of the 21 student participants were business majors, other majors such as psychology, biology and mathematics were represented.

English-writing major Jasmine Wright ’17 was struck by how many of the alumni she spoke to during the excursion had “changed their career paths several times, networked and found new interests in a different field.” Wright took away a valuable lesson: “Networking is probably the most important and helpful thing you can do in your college career, and attending the CIE strengthened and helped me gain confidence in that skill.”

Financial services major Spencer Seibring ’17 agreed that the chance to interact with successful IWU alumni was the trip’s biggest highlight: “It gives you an overall outlook on how alumni became successful and what it took for them to get to that spot.”

Williams was impressed by IWU students who visited her East Loop offices: “They showed interest, curiosity, intelligence and passion,” she said. “Many of them definitely have the traits that any employer would want. And, yes, they made me proud to be a part of IWU again.”

After the trip, all 21 student participants filled out evaluations of the experience, which were tabulated by Laurie Diekhoff, associate director for career engagement at the Hart Career Center. “We were thrilled with the outcomes of our first CIE,” Diekhoff said. “Students all reported that the trip met or exceeded their expectations, and 100 percent of the participants said they would recommend it to their peers. It was rewarding to watch them gain confidence and know that their career trajectory was being positively impacted.”

Career Center Director Warren Kistner ’83 emphasized that alumni will remain essential to the CIE experience. “Students benefit tremendously from alumni engagement, and it also connects our alumni back to the University in a meaningful way. Programs like the Career Immersion Excursion provide a structured opportunity for this type of engagement.”