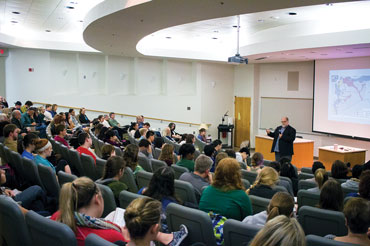 When it comes to the upheaval caused by the ongoing civil war in Syria, the numbers are staggering. More than 260,000 people have been killed in the conflict, which also displaced more than half the country’s population internally and abroad. A November 5th teach-in sponsored by the International Studies Program’s Development Team sought to bring a deeper understanding of the conflict’s complexities. Moderated by Professor of History Tom Lutze, the panel included Michael Weis, Irv Epstein and Kathleen Montgomery, professors of history, education and political science, respectively.

“I’m going to attempt to tackle 2,000 years of Syria’s history in 10 minutes. But don’t worry, I’m going to skim the first 1,900,” said Weis, who explained the country of Syria did not exist until after World War I, when Britain and France carved up the Ottoman Empire. “They tried to create a nation-state where none existed. So no one has really thought of themselves as Syrian.” What emerged were more isolated interests, based on religion, ethnicity and a drive for regional power, creating a dangerously precarious political situation.

“This conflict has had international dimensions from the get-go,” said Weis, whose research focuses on U.S. international policy. Syria is a prime stage for ongoing struggles between Turkey and ethnic Kurdish, Saudi Arabia and Iran and even the U.S. and Russia. “The Russians have only had one ally in the Middle East, and that is Bashar al-Assad in Syria. This is about more than the oppressive Assad regime,” which represents only a small percentage of the Syrian population.

When fielding a question from the packed auditorium in the Center for Natural Sciences, Weis expressed doubt that the Syrian conflict could lead to a “proxy war” between the U.S. and Russia, reminiscent of Vietnam. “While there is a lot of volatility there, I don’t think either side wants to engage the other.”

“We have a history of backing dictators, and it not working out that well,” added Weis, recalling the Taliban in Afghanistan and Saddam Hussein in Iraq. In the same way, he said, the West and its allies backed the initial anti-Assad revolt that evolved into the Islamic State, or ISIS.

All of the panelists reiterated the concept that the United States has a moral responsibility to react to the ongoing refugee crisis. As Epstein, the Susan and Ben Rhodes Professor of Peace and Social Justice, put it: “The United States was complicit in the destabilization of the area,” and should do more to help the thousands of refugees “who are fleeing horrible violence.”

In exploring the oppressive nature of the Assad regime, Epstein noted it was schools, universities and teachers that Assad first targeted in the civil war, viewing them as bases for protests like those that had flooded the Middle East during the 2011 Arab Spring. Epstein called the attacks the “silencing of ideas,” which is a larger problem for society. “When there is no safe place for ideas, when a government attacks its own schools and converts them into military facilities, it is a precursor to total destruction.”

“Education is a basic human right, allowing people the ability to work and develop the means to pull oneself from poverty and illness,” Epstein added. Of Syria’s refugees, “You are talking about an entire generation without access to education. Control of borders does not supersede treating migrants with the degree of respect they deserve.”

Montgomery, who specializes in Eastern European politics, delved into the challenges and fears many former Soviet-bloc nations faced when millions of refugees flowed to their borders. “Countries, like Slovenia and Hungary, feel like they are becoming the ‘border guards’ for Europe,” she said. “And at these pressure points, they are frustrated and feeling overwhelmed.” Slow reactions from Europe and the U.S. resulted in tragedies, noted Montgomery, pointing to the suffocating death of 71 migrants in a smuggling truck outside Vienna and the deaths of more than 2,600 people in the dangerous journey across the Mediterranean.

Montgomery looked to Hungary closing its borders as a prime example of mishandling the crisis. “After not allowing thousands of people to board trains for days, they finally let them on, but didn’t tell them they were heading to refugee camps outside the city,” Montgomery paused and took a long breath. “People being loaded onto trains and shipped off to camps in Eastern Europe? This is not the best place for this to be repeated,” she said, alluding to the deportation of Jewish people during World War II.

“Our community, and our world, need to be more mindful of the events in Syria, and of similar issues,” Lutz said after the session concluded. “This was an opportunity to explore a complex subject in a more in-depth manner, and I’m pleased by the interest and questions from the audience. My only regret is that we didn’t have more time.”