Even the casual observer might be prompted by media reports to think sexual assaults on college campuses have spiraled out of control in the past few years.

That perception has grown in part due to greater scrutiny of the problem. Protections under Title IX, the landmark federal civil right that prohibits sex discrimination in education, now extend to sexual violence against students. Associate Provost Frank Boyd, IWU’s Title IX coordinator, explains that an institution whose culture fails to appropriately address issues of sexual assault is, by definition, denying women and others — including members of the gay, lesbian and transgender community — access to educational opportunity.

Title IX compels colleges and universities to resolve reports of rape, whether or not an alleged victim reports the incident to the police. If a college fails to handle cases promptly and fairly, the U.S. Department of Education can find that it has created a hostile learning environment. The department is now investigating more than 100 colleges and universities for possible violations of Title IX related to alleged sexual violence. For institutions that fall out of compliance, federal financial aid can be withheld.

Illinois Wesleyan is not among the institutions under investigation. That hasn’t stopped IWU administrators from working hard to address the problem of sexual assault on several fronts.

Vice President of Student Affairs and Dean of Students Karla Carney-Hall sees the increased national focus on campus sexual assault as an opportunity for IWU to emerge as a leader among liberal arts institutions in dealing proactively with the issue. This past year, IWU’s sexual misconduct policies were revised, and training to acquaint all campus employees with the new policy changes was administered. Initiatives to partner with community allies are also underway, and a survey to gauge student perceptions of the campus climate was conducted this spring. 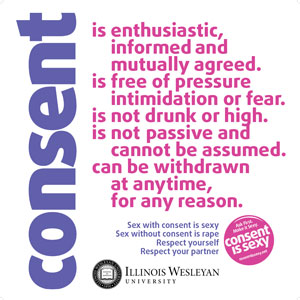 At the start of the fall 2014 semester, the University launched a major campaign aimed at preventing sexual assault through education. Developing programming around a “Consent is Sexy” theme, efforts to increase students’ awareness began at first-year orientation and have continued through the academic year.

From posters in nearly every campus restroom to programming in residence halls and through student organizations, “we have tried to be very big and very visible,” says Carney-Hall.

Among the messages students receive are precise definitions of both consent and absence of consent, as well as the fact that most sexual assaults on college campuses occur between people who know one another.

IWU also has a strong program for bystander-focused prevention of sexual assault. Carney-Hall says the bystander approach is nationally regarded as among the most promising tools in preventing sexual assault. It encourages the community to take ownership of sexual violence as a problem and to speak up when they witness potentially dangerous situations or sexist language.

Bystander training is designed to give students the knowledge and creative tools they need to give them confidence to intervene in situations “they think may be problematic or headed in a wrong path,” said Carney Hall.

“We’ve done bystander intervention training for over 300 students, which is a nice place to start,” she adds.

Other key factors in the University’s sexual assault program include providing support for survivors, investigating incidents promptly and adjudicating them fairly, and protecting the community from sexual predators.

The fact that Illinois Wesleyan’s is a tight-knit, caring community makes support for such programs a natural fit, Carney-Hall adds. Numbers of reported sexual assaults on campus have historically been low: four reports of rape in 2013 and one of dating violence in 2013, according to the most recent statistics available (provided in accordance with the Clery Act, which requires colleges and universities who participate in federal financial aid programs to keep and disclose information about crime on or near their campuses).

Carney-Hall agrees that increased reporting can be an important indicator that an institution’s prevention and policy efforts are working. “That means students who are victims of assault feel they can come forward and get support.”

“We believe we can be a leader and create a climate free of sexual violence and harassment,” said Carney-Hall. “We really want to connect with students in this. As in shaping the campus climate, positive student engagement will play the biggest role.”

Part of what that means, she added, is that “students see violence as not just something between two people, but something that affects the entire community.”