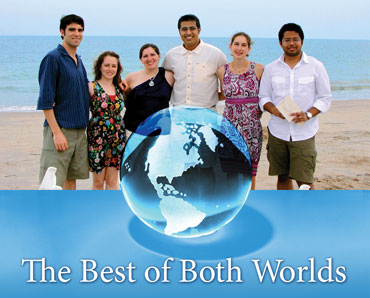 IWU alumni couples share the joys and
challenges of becoming an international family.

For more than 20 years, students from all over the world have lived together in the grand, old mansion, now affectionately known as the International House, or I-House for short. Ten years ago, I lived there. We were a family of friends from places like India, Japan, Ghana, Ukraine, Bulgaria and Bangladesh, as well as South Carolina and Illinois. I felt that I belonged at the I-House, and I never wanted to say goodbye to it. And in a way, I never did. While studying abroad in Amsterdam my junior year, I met my partner for life, Tom, born and raised in Tel Aviv, Israel. We have been building our own international house ever since.

And we’re not the only ones.

According to recent reports by the Pew Research Center and The Economist, the share of new marriages between spouses of a different race or ethnicity rose to 15 percent in 2010, and the percentage of international marriages in America has nearly doubled since 1970, hovering now at around 5 percent. With the surge of international students at American universities and the number of American students studying abroad ever on the rise, cross-cultural and inter-ethnic marriages are becoming increasingly common among college graduates.

Several of the IWU students with whom I resided at the I-House have also taken international living to a domestic level. My recent conversations with three of these couples revealed both the challenges and rewards involved when cultural differences animate one’s family life.

Hailing from Delhi, India, physics major Prakrit Jena ’05 lived on the third floor of the I-House, just above Illinois native and biology major Jennifer Bartlett ’05. The two first met when Jennifer stormed upstairs in the middle of the night to demand that Prakrit lower the volume of the techno music that interminably blasted from the speakers of his desktop computer. Prakrit claims that it was love at first sight when, standing in the doorway of his room, Jennifer was struck by his irresistible gaze. At the I-House, neighborly affairs can have global implications. The two got engaged on the The Ames Library steps and now live in New York City, married with two children.

When asked about the benefits and challenges of raising children cross-culturally, Prakrit and Jennifer emphasize how their worldviews have converged. “We grew up in cultures that valued ideas of discipline and happiness differently,” Prakrit observes. “Probably the biggest difference is our approach to education and learning,” Jennifer adds. “Prakrit was raised in a culture where competition and academic selectivity was the only path to success. He wants our son Alex to have structured lessons with clear measures of success like scores and grades. I encourage a more open-ended, play-based learning style where the children make their own discoveries.” These differences of approach are deeply ingrained, but Prakrit and Jennifer are glad to raise their children by selectively employing the best methods from both of their upbringings.

Certainly, being in a cross-cultural relationship provides extra motivation to analyze and exchange ideas about each other’s values. In my own experience, this negotiation usually leads to thoughtful,  although sometimes animated, compromise. Being compelled to discuss our differences on a cultural rather than personal level has contributed a great deal to the emotional strength of my family.

While international couples bond by forging values that transcend their cultural differences, it can still be frustrating when that bond is not fully understood by others. Music education major Patrick O’Connor ’06 met his wife, Alice (Hsu) O’Connor in Chicago a few years after graduating from IWU. The daughter of Taiwanese immigrants, Alice was born and raised in the United States, spending summers with her grandparents near Taipei. She is a native speaker of Taiwanese and Mandarin and maintains close ties with her family origins. After Patrick and Alice had two children, a daughter and a son, Alice was taken aback when people would say their “‘mixed’ kids were much cuter than ‘regular’ kids,” or fixated on the children’s exoticism, asking, “Where are they from?”

“Kids are hard to raise no matter what color their skin or what their ethnic backgrounds are,” says Alice. “But it adds that extra something when we constantly have to answer ‘What are they?’” While such comments may be tiresome, Patrick and Alice also look at them as reminders of the importance of exposure to difference, cultural sensitivity and open-mindedness.

These couples find that their cross-cultural relationships continually enrich their understanding of themselves, their values and branches of knowledge they never would have otherwise explored. Patrick, for instance, is learning Mandarin alongside his 4-year-old daughter. “I’m constantly learning new things, and I enjoy endless opportunities for new experiences,” he says. Once a year, the foursome travels from their South Carolina home to Taiwan, where Patrick marvels at the strong respect for family in Asian culture. He reports being particularly struck by the shrine Alice’s grandmother maintains for deceased relatives, and he and Alice have been considering ways to blend such traditions into the life of their own young family.

Jennifer and Prakrit also appreciate having a good excuse to travel. Until she made her first visit to New Delhi in 2010, two years after they married, Jennifer was initially skeptical of Prakrit’s account of life in India. “I thought Prakrit was embellishing his life stories to impress me,” she remarks, citing a rough-and-tumble motorcycle accident Prakrit experienced as a teenager and the death-defying, “improvised” medical attention he received at the time. Having seen India with her own eyes, Jennifer now willingly tempers her disbelief with a dose of worldly wonderment. She especially relishes long conversations with Prakrit’s parents about Indian history and culture.

In turn, Prakrit credits his wife for helping him navigate life in America — although he is still mystified by “the Midwestern enjoyment of snow and winter,” particularly after enduring so many Januaries on the windswept tundra of Central Illinois. Indeed, adjusting to foreign climes sometimes ranks as one of the more difficult aspects of living in the far-off homeland of one’s spouse. My Israeli husband complains about winter in much of the United States almost as much as I dread the sun glare in Tel Aviv.

The cultural differences that we routinely negotiate are, of course, challenges that all couples face regardless of their backgrounds: opinions regarding personal space and sharing, punctuality, the display of affection, interaction with one’s elders, materialism, the treatment of pets and even notions of what constitutes good sportsmanship and competition. Economics major Amer Khan ’05 and sociology major Amanda Wydeveld-Khan ’05 met as first-year students who shared an enthusiasm for competitive badminton. I was Amanda’s roommate in Ferguson Hall as well as at the I-House, and I have fond memories of watching her and Amer trot off to the Shirk Center together, racquets in hand. Shuttling birdies ignited their friendship, but it also provided them with their first opportunity to decipher their different approaches to the game, and to life. Growing up in Dhaka, Bangladesh, Amer took for granted the rigorous, competitive style common in Southeast Asian culture. He describes his high school badminton coaches as serious trainers who constantly demanded perfection and who were “brutal in their criticisms.” Amanda, on the other hand, was accustomed to the American emphasis on effort and positive reinforcement and often felt hurt and affronted when Amer would assess her technique. Fortunately, these differences were stimulating rather than off-putting, and both came to understand and appreciate the other’s approach.

But they faced other, much graver difficulties than those negotiated on the court. Amer, a Muslim, arrived in Bloomington only two weeks before the attacks of September 11, 2001. “Being a Muslim in the United States after 9/11 was not easy,” Amanda emphasizes. “I was fortunate enough to know the amazing, kind, generous person that Amer is, but I had a few off-campus coworkers who refused to speak to me once they found out that I was dating a Muslim. We were strong enough in our relationship and in our beliefs to understand that this was simply ignorance, and we left it at that. It never caused me to question our relationship.”

In more recent years, Amer has encountered a share of prejudice against his wife, as well. “Among my Southeast Asian community and friends, some of whom are still rather conservative, my ‘white’ wife is sometimes discussed,” he says. “I have also come across some brow-raising remarks in more conservative Muslim communities ‘You have to do the vacuuming and cleaning?’ or ‘Your wife won’t cook for you all the time?’ are some of the common ones. ‘Not in the US of A and certainly not in the twenty-first century!’ I sometimes retort.”

While Amer does not observe many of the customs of his upbringing in Dhaka, he does strive to maintain those that lie close to his heart. “I suppose there are values I am simply not ready to part with,” he says, citing a standard of hospitality that many Americans would consider excessive or ostentatious. While Amanda prefers to offer a more judicious, “just enough” for their guests, Amer seeks to provide an experience of “grandeur and abundance” keeping with the prided quality and quantity of entertainment he recalls from his childhood home. “However,” he notes, “it was always clear that the positive dynamics of our relationship outweighed such matters.”

For Amanda, one cherished aspect of their “positive dynamics” is the exhilarating variety that occurs when they combine their holidays, food customs, music collections and childhood memories. Amer has adopted many Westerners’ passion for companion pets, lavishing love and attention on the housecat that Amanda adopted several years ago. Amanda now adores Southeast Asian dancing. “Our differences bring newness and excitement to life!” she says.

For this very reason, the I-House, in its own quiet way, is perhaps one of the most exciting places on campus. Patrick found living at the I-House ideal because, for him, “meeting people who are different from me is the most interesting way to live and interact.” But as these former residents consistently report, the beauty of the I-House concept lies in a basic tenet of undergraduate socialization: putting students in a shared space.

“With so many American and international students living side by side, we quickly became individuals rather than examples of our specific nationalities,” Jennifer observes. Cross-cultural friendship, love and lifelong commitment become possible because at the I-House, students learn to see through the noise of overt differences and stereotypes. As Prakrit explains, “Our cultural identities ended up being a small part of what makes us us.”

About the author: Anna Deters ’04 was an English/history double major at IWU. Her international experiences include study her senior year at the University of Amsterdam and completion of her master’s at the Università degli Studi di Torino. She wed Tom Erez in 2009 and recently completed her Ph.D. in English literature at Washington University in St. Louis. The couple and their 2-year-old son, Charlie, reside in London.

Click here to read about how IWU's International House has contributed to campus culture.