Through her historic restoration work, Erika (Rozinek) Holst ’01 has made history come alive. Erika is curator of collections at Edwards Place in Springfield, Ill., where she recently oversaw the complete restoration of the mansion’s first floor to its 1858 appearance.

The home of Benjamin and Helen Edwards was a social center of Springfield. As the youngest son of Gov. Ninian Edwards, Benjamin was part of one of the state’s wealthiest and most powerful families. An attorney, Benjamin was in frequent contact with Abraham Lincoln, both professionally and socially, and Lincoln was a frequent visitor to the Edwards mansion.

Erika joined the Springfield Art Association staff shortly after the group started seeking bids for the restoration project in 2010, and it quickly became her life. According to an article in the Illinois Times, “At times, she found herself poking holes in plaster to discover hidden secrets or crawling into tight spaces which likely hadn’t been seen by humans in more than a century.” After the many hours she’s spent on the restoration, Erika told the Illinois Times she feels as if she knows the Edwards family personally. “I feel like I spend more time with dead people than living people sometimes,” she added. 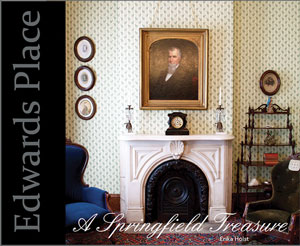 The first-floor restoration project took more than a year and cost nearly $500,000. Among other treasures, it revealed ornate floral wallpaper hung in 1857 in the formal parlor and children’s parlor, which was in place during Lincoln’s visits to the mansion. The couch where Lincoln and future wife Mary Todd sat during their courtship, originally the property of Ninian Edwards, has been restored and is now on display in the mansion.

Erika wrote a book in conjunction with the restoration. Edwards Place: A Springfield Treasure was published by the Springfield Art Association in April, with all proceeds going to fund the upcoming restoration of the home’s second floor. Richly illustrated, the 150-page, full-color hardcover volume “chronicles the story of Edwards Place from its construction in 1858 to its heyday as a social center of Lincoln’s Springfield, to its years as an artistic hub of downstate Illinois, and finally through the restoration process,” Erika says.

Erika’s interest in historic renovation was sparked after interning at the David Davis Mansion in Bloomington while she studied history at IWU. She holds a master’s degree in early American culture from the University of Delaware. She and her husband Chris live in Springfield with their son. This year, she was named one of Springfield’s “40 Under 40” by the Springfield Business Journal.