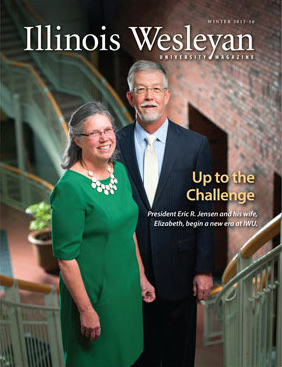 President Eric R. Jensen (shown at right with his wife, Elizabeth) will build on Illinois Wesleyan’s strengths to lead it toward a future filled with both challenges and opportunity.

Evan Kasprzak ’10 shares his knowledge of the entertainment industry, from Broadway to Hollywood, with Illinois Wesleyan students.

As a new look for IWU’s mascot debuted, past Tommy Titans recalled the joyful and occasionally wild times spent playing the role.

Veterans find their past service in Iraq and Afghanistan informs their IWU experience in subtle and surprising ways.

Recipients of the 2015 Alumni Awards were honored during Homecoming 2015.

Anatomy of a Conflict 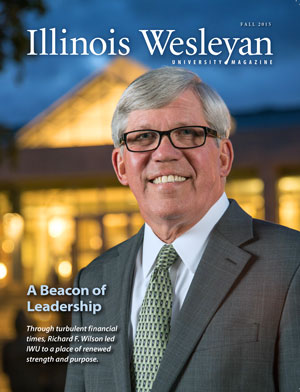 All in for Wesleyan

With careful planning and bold vision, Richard F. Wilson proved himself to be the right president for the right time.

Learning more about an election dispute that drove an IWU class apart also showed the importance of documenting our own lives.

We asked alumni and current students to take Illinois Wesleyan with them on their spring and summer travels and share with us via social media.

And the Winners Were ... 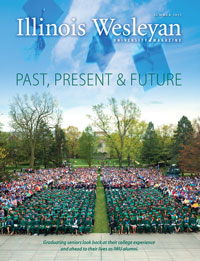 Moving Ahead and Looking Back

This spring, we polled graduating seniors about their Illinois Wesleyan experience, just as the next chapter of their lives was about to begin.

Peter Asaro vs. the Killer Robots

Philosopher Peter Asaro ’94 wants world leaders and ordinary citizens to consider the dangers of programming machines to decide who lives or dies.

A Calling to Justice

Cliff Nellis ’97 created and leads a legal center that is changing the lives of young people in one of Chicago’s toughest neighborhoods.

An Ocean of Challenges

Her drive and savvy have propelled Miki David ’92 to the top of Hawaii’s competitive open water racing scene.

A surprise made this year's Commencement even more special for one alumna. 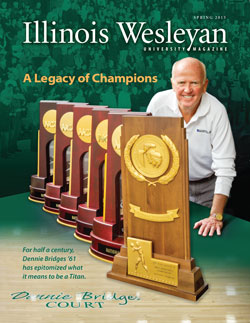 The Titan Spirit Personified: Honored for the half a century he dedicated to his alma mater, Dennie Bridges ’61 showed why he’s beloved by generations of fans and players.

Weekend @ Wesleyan:When classes end Friday, there are 48 hours for students to explore activities and events that energize every corner of campus.

The Best of Both Worlds: IWU alumni couples share the joys and challenges of becoming an international family.

Speaking Out: After finding her passion in gender issues at IWU, Molly McLay ’06 confronts the problem of sexual assault on one of America’s biggest campuses.

Meet IWU’s New Director of Alumni Relations: Adriane Powell says she “gets most excited when I can connect the dots for someone else.