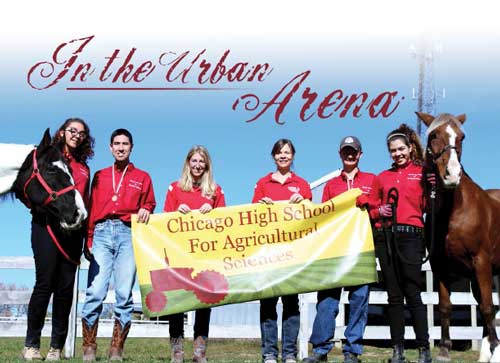 In bringing a new equestrian facility to the inner-city high school where she teaches, Maggie Kendall’s lifelong love of horses gallops full circle.

For Maggie (Folk) Kendall ’99, horse-riding was a hard habit to break.

She spent summers riding horses and doing chores on a farm owned by a friend of her grandparents, Dick and Linnea (Lamson) Folk, both 1939 IWU alumni, near her hometown of Mt. Morris, Ill. After graduating from Illinois Wesleyan as a biology major and secondary education minor, she launched a satisfying career as a teacher at a top Chicago prep school. But she found herself pining for the open fields and animals she loved.

This December, Kendall found herself — students on one side and a horse on the other —being handed a check for $100,000 toward her plan to build an indoor equestrian arena on Chicago’s southwest side. Kendall won the “Dream Big Challenge” grant from Farmers Insurance for her proposal to build the facility at the Chicago High School for Agriculture Sciences (“Chicago Ag”). On Jan. 1, she found herself atop a float at the Rose Bowl Parade in Pasadena, Calif., along with other teachers who had won Farmers’ Dream Big Challenge. With her on the float was comedian and actor Jack Black, who also spoke to Kendall’s students via a video posted on Facebook.

“Riding on the float in the Rose Bowl parade with Jack Black was one of the most incredible experiences of my life,” says Kendall. “He was genuinely nice and surprisingly laid back. The crowd cheered wildly when they saw him. Farmers Insurance really rolled out the red carpet for the winning teachers and made us feel like we were on top of the world.”

At Chicago Ag, Kendall heads the agricultural science department and runs a therapeutic riding program that benefits special-needs students, who comprise 13 percent of the school’s population.

A college prep high school dedicated to helping urban students prepare for careers in agriculture, Chicago Ag is the only one of its kind in the Midwest. Its 80-acre campus includes the city’s only working farm, complete with horses, cows, pigs and chickens.

Kendall spent most of last summer working on an 80-page proposal for the indoor facility. “I had to do a full budget with building costs, including electrical and plumbing, and we visited a bunch of different facilities to figure out exactly what we wanted.”

Her vision for the facility was partly inspired by Chicago’s famously rough weather, which severely limits the time her students have with the school’s specially trained horses.

The indoor arena would not only extend the program year round, but would also offer more opportunities to special needs children and adults throughout the area. With a fee for lessons, the indoor facility would be self-sustaining, Kendall said, and would attract riders from a wide geographic area.

Kendall believes her passion for the project helped it land a spot as a finalist. “I believe so deeply in the value of this,” she says. “The people at Farmers said the proposal was so heartfelt that it really spoke for itself.”

The proposal also reflects Kendall’s twin passions: teaching and horse-riding. It sometimes amazes even her how well the two combine.

Among special education students, Kendall sees dramatic strides in “social, emotional and communications” skills through riding. Two of her students won equestrian events at the Special Olympics Illinois fall games in Rockford, with Shane Blake receiving the George Moore Award for Equestrian Rider of the Year at the event.

“The award is definitely well deserved,” Kendall told the Beverly Review. “Shane is at the barn seven days a week. He cleans the stalls, fills the buckets and rides twice a week for an hour at a time. He even comes in as a volunteer from 8 to noon every Saturday and Sunday. I can’t imagine Shane without the barn; he’s devastated if he can’t come.”

The impact can be even more profound among wheelchair-bound students “because you get the emotional side, the empowerment of it. Kids will say things that are so moving, like, ‘This horse gives me my legs.’”

Maggie Kendall came to Illinois Wesleyan with plans to be a doctor. But after working at a county hospital in Chicago her junior year, she had second thoughts about her career choice. Upon her return to campus, she began taking education courses. “I graduated in four years with all my classes but I did my student teaching the fall after I graduated.”

Along with her grandparents, Kendall’s father Richard, Class of ’68, and an uncle and great uncle all attended Wesleyan. She was glad she chose a school “with an environment where I was able to have strong ideals. All my friends came from a similar background where we valued family, character; being a good person and a good citizen.”

She also appreciates the diversity of her education, which “helped me to understand and respect different cultures and races.” And her IWU coursework, which she describes as “top-notch” and “rigorous,” prepared her for work at Walter Payton College Preparatory, a public four-year magnet high school located in Chicago’s Old Town neighborhood, where Kendall taught biology and chemistry for 12 years.

“But while I was doing that I was still keeping my rural roots. I had a horse club and I would drive a group of kids once a week out to where I kept my horse outside the city, and I would teach them about horses.” During her final year at Payton Prep, Kendall became certified to teach children with special needs how to ride horses.

“And that’s why my biology degree is so important,” Kendall says. “Because I’m really teaching them biology, but it’s this amazing classroom where students are motivated to learn about proteins, for example, because the animals in their care have specific dietary needs based on their digestive system and their purpose. So the kids are just so much more interested in learning, because they want to take good care of their animals.”

It’s hard to think of another school where shoveling manure is part of the coursework, but Kendall says for many students it’s their favorite part of the day. “They’re proud of it … it’s an accomplishment. I understand that because I’ve been doing that since I was 6 years old and loving it but these kids love it, too — they love to work and get out of the classroom. It’s immediate gratification. It’s dirty, and you work hard, and it’s clean, they see it clean. But the driving force is that the animals have to be taken care of.”

With encouragement from the surrounding community, Kendall’s vision for an indoor riding facility has grown, from four walls and a roof “to something that’s more like a community center with seating, office space and a heated viewing room” where parents can comfortably watch their children ride. As a result, the initial estimate of $500,000 to complete the project has increased to around $600,000. But Kendall believes in the project and has begun the process of gaining additional sponsorship from industry and community partners.

When the Farmers check was presented, Kendall stepped forward to speak. After the cheers from Chicago Ag’s students and staff quieted, she told them that even though her name was on the check, the award belonged to everyone — as did the responsibility. “The thing about it is everybody has a part. Agricultural mechanics students will help build the facility; finance students will do the billing and schedule lessons, and horticulture students will grow the hay we need!” she said to cheers and laughter.

Afterwards, Kendall reflected on winning the grant and on the path that led her to this moment. “This job brings together who I am and what I know. But it wasn’t something I expected or really prepared for,” she admits, smiling and shaking her head with a hint of disbelief. “I feel like it happened by the stars aligning. I’m very grateful.”