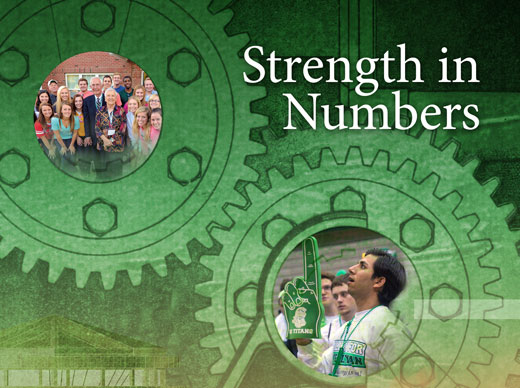 In dollars and participation, Titans kept the gears rolling to meet a historic challenge and transform students’ lives.

When asked what he thinks might be a suitable headline for Illinois Wesleyan’s just-concluded capital campaign, President Richard F. Wilson takes less than a second to respond.

It’s a fitting summary of the Transforming Lives campaign. Publicly launched in 2009, its goal was to raise $125 million that would be used to strengthen the University’s endowment, provide financial support for students and faculty, and fund new facilities and programs needed to fulfill IWU’s educational mission.

Officially ending this past summer, the campaign’s final tally of contributions and pledges not only met but exceeded that goal, for a grand total of $141 million.

Just as impressive were the number of alumni and friends who contributed: 19,231. Of those, 9,628 were first-time donors. (To read more final numbers for the campaign, click here.)

Asked what he thinks was the most vital factor in Transforming Lives’ success, Wilson responds: “Incredible loyalty on the part of alumni and friends. There’s no way for me to truly express my gratitude, except to say thank you for the many gifts that we received.”

“When you think about the time period in which the campaign was conducted, we were right in the heart of what’s referred to as the Great Recession. And yet we continued meeting our interim goals, despite what was going on in the larger economy. For many of our alumni and friends, they cut back on lots of things, but they continued to support Illinois Wesleyan.”

While Wilson acknowledges the risks of starting the largest fund-raising campaign in IWU history at a time of economic uncertainty, “we also knew that this recession would adversely impact current and prospective students who would need financial aid more than ever.”

Campaign co-chairs Steve Wannemacher ’73 and Jean (Sullivan) Baird ’80 also felt it was important for the University to call on supporters to help keep IWU strong at a time when many colleges were struggling.

“I always had faith that we would see this through as a community who cares deeply about Illinois Wesleyan and wants to keep its promise alive for future generations,” says Wannemacher, who is vice chairman of Bloomington-based Heritage Enterprises.

“It was just amazing for us to see the level of support and know these were gifts from the heart,” adds Baird, who is a State Farm vice president of operations. “These are people who were asked to step up and who didn’t say no. So it was not just the gifts themselves, which are so important, but the feeling we are all invested in this one special place: it was just uplifting.”

A huge boost for the campaign was that $73 million had already been pledged from alumni and friends when its public phase began in 2009. Provided by many of IWU’s longtime supporters, those gifts included a $25-million pledge by Honorary Campaign Chairs B. Charles “Chuck” Ames ’50 and Joyce “Jay” Eichhorn Ames ’49. It was the largest such gift in University history.

Wannemacher credits Chuck Ames “for setting an important tone: he urged everyone to pitch in, no matter the amount. Chuck said, ‘Ten bucks is just as important as a thousand, because it all adds up,’ and that’s exactly what happened.”

“I think for most of the people who made a gift to the campaign at any level, there was a desire to make a difference,” says Wilson. That was reflected in the big turnaround in the number of alumni who give regularly to the Wesleyan Fund. The annual fund provides critical support for students with financial need, but has historically suffered much lower participation than IWU’s peer institutions.

“To see that participation rate fall to 19 percent and then, in the last two years, climb back to 23 percent is a notable campaign accomplishment,” says Wilson, who adds that, “Sustaining this growth will be critical to our future as an institution.”

Support for the Wesleyan Fund was sparked in 2013 and again this past April as Titans rallied to meet “All in for Wesleyan” one-day challenges that raised a combined $1.3 million, had nearly 5,000 alumni and friends participate and attracted 500 first-time donors. It was an example of the effectiveness of campaign volunteers, says Wilson. “Hundreds of loyal alumni reached out to classmates and friends on behalf of the campaign and University. It would have been impossible to generate the kind of support we had without this broadly based participation and enthusiasm.”

Wilson, who donned a green-and-white balloon hat for a midnight pep rally launching this year’s “All in for Wesleyan” challenge, was also impressed by the student enthusiasm shown. “It’s a sign that our students truly understand and appreciate the importance of alumni support for the educational opportunities they pursue here.”

For those visiting campus, the campaign’s impact is most visible in brick-and-mortar additions such as the new classroom building, State Farm Hall; the Minor Myers, jr. Welcome Center, home of the Office of Admissions and the Hart Career Center; and the Joslin Atrium, a 2,500-square-foot glass addition to the Memorial Center. Campaign gifts also led to major renovations of Tucci Stadium, the Ames School of Art and the School of Music.

While those projects “have greatly advanced the quality of our infrastructure,” says Wilson, “they were also a relatively small percentage of the overall campaign effort. What may be less visible but is just as important is the support this campaign has provided to our students and faculty.” Enhanced study-abroad and research opportunities and the creation of 20 new endowed professorships have helped fulfill the goal to transform lives.

But none of those improvements matter to students who want to come to IWU but find they don’t have the financial support to do so. To help address this concern, a total of 231 in new annual and endowed scholarships were created during the campaign. Many of those were Promise Scholarships, which “fill the gap between what the University can provide and the demonstrated need presented by a prospective student,” says Wilson. By filling that gap —$5,000 a year for four years — Promise donors “create a pathway for a talented student with limited means to become a Titan, thus sustaining an important value embraced by previous generations of alumni and friends.”

As a student, Baird benefited from similar support. “I grew up with only my mom and six brothers and sisters. There was simply no way I could have attended IWU without financial aid and the work-study program. Because of people giving support, it was possible for me to go to Wesleyan.” A French major, Baird’s Illinois Wesleyan experience included participation in Sigma Kappa and the track team and study abroad in Paris.

Wannemacher says he arrived on campus “as a kid from the west side of Bloomington. … There’s so much that’s important in my life that I can trace back to roots at IWU,” including meeting his future wife, Deb (Newberg) ’74. A business administration major and Sigma Chi member, Wannemacher says Wesleyan “was the perfect environment for me not only to get a great education but to develop relationships with peers and faculty that matter to this day.”

As its name suggests, Transforming Lives was about “making a real, lasting difference in the lives of current and future students — who, in turn, go out and make a difference for others,” says Wannemacher. “At IWU, we are preparing students who will become active citizens of our country and world, students who can take on the challenges of leadership and engagement.”

“I feel like I had that experience at IWU,” he continues. “I think for our alumni, it’s important that students find what we found here — a place to grow and to discover, to learn from mistakes as well as success, to find new talents and new ways of looking at the world. That’s what transforming lives really means; it’s central to the Illinois Wesleyan experience.”

Baird hopes a lasting legacy of the campaign is that it “lays the groundwork for a culture of giving among our alumni — not just in dollars, but in providing an internship, or sharing their experience to help a first-generation student make a successful transition to college.”

She continues, “For every student on campus, there is an opportunity for an alumnus to connect and make a real difference in his or her life. And alumni who have done that say the results can be incredibly rewarding. When you look at the students who have come out of Wesleyan and made a difference in the world, so many of them say they couldn’t have done it without their IWU experience.”

As University trustees, Baird says both she and Wannemacher “probably get a closer look than most alumni at the challenges IWU is facing. The campaign was a huge achievement, but there remains a huge demand on the University to meet the financial needs of students who want and deserve to come here.

“The good news,” she adds, “is that we are moving forward from a position of strength.”

To read a summary, "Transforming Lives: By the Numbers," click here.

To read about the Ames Challenge for endowed professorships, click here.