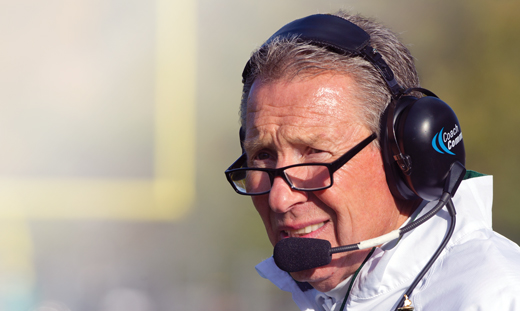 When Norm Eash ’75 served as Dwight (Ill.) High School’s football coach from 1982-86, his preseason Media Day was a hit for those attending.

Eash would have everything perfectly arranged. Players were ready for interviews with reporters and dressed to have their photos taken. A preseason guide with all essential information was handed out. Eash was available for a question-and-answer session to discuss his squad.

In short, it was like being at a college media event.

When Eash moved onward and upward in 1987 to become head coach at his alma mater, Illinois Wesleyan, he already had a plan in place and “a vision” for what type of program he wanted to run.

“Norm is maybe the most organized coach I’ve ever seen,” said Illinois Wesleyan Athletic Director Dennie Bridges ’61, who hired Eash. “He leaves nothing to chance and covers every base.”

That has translated into victories —a lot of victories — in the last 27 seasons.

In fact, Eash became the winningest coach in IWU football history when the Titans defeated North Park, 52-21, in an Oct. 12 Homecoming contest at Tucci Stadium. The victory gave Eash 169 career wins, surpassing the mark of 168 held by the late Don “Swede” Larson ’50, who coached at Illinois Wesleyan from 1954 to 1986 and for whom Eash played as a Titan lineman in the early 1970s.

To overtake Larson, who Eash said he holds in “such high esteem,” makes this a strange kind of celebration.

“For me it’s almost like I don’t want to tie him,” said Eash, his voice quivering and eyes glistening. “For our players now and in the future, they deserve those wins, and we want to get those wins because we have goals for the season.

“When you consider that football is the oldest sport on campus [122 years] and that there have been two coaches in 59 of those years, it’s really humbling to be coach at my alma mater,” said Eash, who played on a team that helped Larson achieve his 100th career win.

“There is no way in my wildest dreams that I thought I would surpass Coach Larson’s victory total here,” says Eash. “As the years accumulate, I was busy recruiting student-athletes in the right spots and forming them into teams in a position to win — and then, all of a sudden, the victory record appears.”

Much of Larson’s coaching philosophy is carried on by Eash. “He had so much pride in the school and cared about all his players,” Eash said. “Coach Larson always had time for the guys on his team, and I’ve tried to carry that with me.”

Eash notes that there were some similarities between him and Larson getting their jobs at Wesleyan 33 years apart. “The school took a chance on me being a high school head coach, never a college coach or assistant, just like they did for Coach Larson,” who came to IWU in 1954 after teaching in the Rockford, Ill., school system for four years.

Chris Bisaillon ’93 saw something unique when Eash recruited him out of Herscher (Ill.) High School in 1989.

“One of the biggest qualities Coach Eash had was he was very good on selling a vision and painting this picture in everyone’s mind that we have to buy in,” said Bisaillon. “If we buy in, and we’re all pulling the same direction, and all demanding of each other and have the same level of commitment he and the rest of the coaching staff has, then we can accomplish great things.”

That certainly happened for Bisaillon.

He was a two-time Division III All-American wide receiver who set the all-time NCAA record with 55 touchdown receptions when he was done in 1992, topping the mark previously held by Jerry Rice of Mississippi Valley State.

And when Bisaillon was inducted into the National Football Foundation College Hall of Fame in May 2012, Eash was there by his side.

“He is an extremely loyal person. To this day I’m still friends with him,” said Bisaillon. “I usually see him several times a year whether in Chicago or Bloomington. We talk on the phone periodically. This is 25 years later, and we’re still maintaining a relationship on a friend level. I don’t think that’s something you’re doing for any other reason than loyalty and being a good person.”

The Titans have won seven CCIW championships and made five Division III playoff appearances under Eash. However, Bisaillon believes those who have played for Eash in the last 27 years learned far more than Xs and Os.

“The life lesson is you’re going to get out of something what you put into it,” said Bisaillon, who is cofounder (with fellow Titan football alums Jason Akemann ’96 and Nate Hilding ’96) of Bottleneck Management, which owns six restaurants in the Chicago area. “He wanted to make sure we were always performing at a level we would be proud of, and we certainly were going to require the same from our teammates.”

Lon Erickson ’97 is one of many former players who praise Eash for his commitment to encouraging his student athletes to excel in the classroom as well as on the field. Erickson was the record-setting starting quarterback for Eash’s 1996 NCAA playoff team and was the winner that year of the Gagliardi Trophy, presented to the nation’s top Division III player for excellence in football, academics and community service.

“It really started during the recruiting process. Coach Eash’s focus wasn’t just on football, but on the academic excellence and reputation of IWU and the opportunities that would be available to expand your intellectual scope while at IWU — and then be well-prepared to pursue any career or further educational goals afterwards.”

Erickson, who is currently the portfolio manager and managing director of Thornburg Investment Management in Santa Fe, N.M., recalls how each initial team meeting of the season included a discussion on how players needed to take care of academics first.

“His leadership on this issue made this mindset commonplace among the coaching staff and team and consistently reinforced the idea that academics came first,’ Erickson said. “For example, if you were a science major, lab sessions often occurred during practice time. You were expected to attend lab sessions. No questions asked. It did not change your status with the team. If you were a starter, you were still a starter. Second string, second string. It stayed true whether it was Augustana week or some other ‘lesser’ rival.”

Eash is fine with the fact that he might be considered “old school” to many.

Quarterback Rob Gallik ’14 said the Titans still use a projector to watch some game film. Eash’s scouting reports include what some would consider corny statements, but they are meant to pump up his team and build confidence.

Gallik considers it “special” to be part of Eash’s milestone victory — and he isn’t alone.

Bridges points to the fact the Titans have 32 seniors on the roster, the most in Eash’s tenure, as proof he is still doing something right.

“The players have a lot of respect for him. He’s built a strong tradition here. He’s been here a long time,” said IWU senior free safety Paul Panno. “When you think of Wesleyan football you think of Coach Eash. He always preaches the same things.”

Eash’s wife, Cheryl (Welter) ’76, surprised him a few weeks prior to his milestone win. She arranged for their five grown children (including son Kyle ’02) to be at IWU’s Sept. 28 home opener and celebrate their father’s 60th birthday, which occurred a couple days earlier. It was the first time, said Eash, that his entire family was at a Wesleyan game together in quite a while, and it left him touched.

The loyalty that Eash has with his own family (which also includes three grandchildren, with another on the way) is about the only one that surpasses his devotion to Illinois Wesleyan.

“ He has a lot of the same traits Don Larson had in the love of the school and just work ethic.