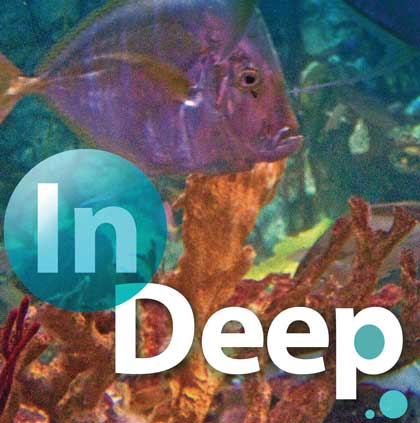 For the thousands who visit Chicago's Shedd Aquarium each day, the creatures who glide, flutter and splash inside the Caribbean Reef exhibit seem beguilingly exotic. To Dawn Dall Ducharme '96, they are as familiar as family.

Peering through the crystal-clear glass of the exhibit's 90,000-gallon circular habitat, she spots a gray cownose ray sashaying gracefully beneath a school of bright-colored butterflyfish. The ray gets its name from its blunt snout, resembling a cow muzzle.

"Hello, Grandma," Ducharme coos. "How are you?"

"Grandma," she explains, is one of the oldest among 500 or so animals representing 80 species in the reef exhibit, among them black durgons, parrotfish and bonnethead sharks.

A mom tells her daughter to scoot over so Ducharme can glimpse the exhibit's green moray eel. Almost 7 feet long, the undulating eel opens and closes its enormous mouth, flashing rows of spiky teeth.

"It's okay," Ducharme replies with a smile. "I see him all the time." As a volunteer diver at Shedd for eight years, she not only sees, but swims among the reef's residents on a regular basis.

Ducharme majored in chemistry at IWU and is a consumables lab manager in the diagnostic division of Haemonetics, a global provider of blood and plasma supplies and services. She's busier than ever, thanks to a recent promotion, but it hasn't lured her away from her bi-weekly dives at Shedd.

"It's like a different world being underwater with all the animals, which is very relaxing for me. Being able to talk to people and educate them on the animals and the reef environment is just an added bonus," she says. "It's almost like a mini-vacation."

Dawn has always found the water a place for both fantasy and refuge. "When I was a kid I used to think I was a mermaid. To me it's always been a very comfortable place, underwater." She first tried deep-water diving while on vacation in the warm waves off the Cozumel coast. Another memorable dive in Curacao foreshadowed her Shedd experiences. Spotting something strange, Ducharme and a friend swam closer and saw a cage constructed from two-by-fours and chicken wire. Trapped inside were two green moray eels, like the one she now swims alongside at Shedd.

The divers untwisted the wire to make an escape hole. But the eels were "quite blind and pretty darn lazy during the day, so they didn't seem terribly interested in our rescue attempt," she says. Finally, they picked up the cage "and basically shook the eels out of it. They were huge — probably 6, 7 feet long. It was so strange, but I felt so good when we finished."

Recalling that feeling, she eagerly pursued a friend's advice to try volunteer diving at Shedd. It's not an easy job to get, she learned. There is often a waiting list for prospective divers, who must meet minimum scuba requirements (40 hours of logged open-water diving) and successfully complete a scripted audition. Once selected, they must log another four practice dives in the reef tank to become comfortable in the environment. After starting on a backup-dive shift for six months, Ducharme finally earned the full rank of a volunteer diver.

For each shift, she plunges into the huge tank to hand-feed animals and talk to guests through an underwater microphone. Video monitors and a high-tech sound system allow every guest to see and hear the divers as they go about their work.

"I love getting out of the water and talking to people, especially kids, about what I do. I get a kick out of hearing people say, 'Hey look, she's the one who was just in the tank!' It's like they think we're not real people in there. Robot divers!"

In addition to her volunteer diving, Ducharme has dabbled in everything from swing dancing to snowboarding. After being certified as a pilot, a friend proclaimed her "a menace on land, in the air and at sea."

"Trying new things was one of the biggest things I decided to do when I was at Illinois Wesleyan," she says. While dedicated to chemistry, including her work as a lab teaching assistant, Ducharme loved exploring other academic avenues at IWU. "I took general courses in psychology, sociology and political science just as electives, and I'm really glad I did. Even as long as it's been since I've graduated, I still fall back on a lot of that stuff."

Though her Shedd dive talks are carefully scripted and she often answers the same questions week after week, Ducharme still enjoys interacting with the public. But working with the animals remains the biggest thrill. "They have so much personality. Some of them just crack me up. It's the way they feed and it's also some of the behaviors that they exhibit."

Ducharme says the exhibit's creatures display natural behaviors that divers might see in the wild, thanks to the aquarium's studied replication of a natural ocean environment.

"If the water's not right, if the temperature's not right, if they don't like the environment they're in — those things can cause stress, and that's one of the biggest things that will kill fish," she says. "We basically try to keep it perfect."

In 1999, Shedd added colorful artificial coral to stand in for environmentally fragile, natural reefs. "The animals can't tell," says Ducharme. "You'll see them nibbling on it — they think it's the real thing."

Living comfortably — in what volunteers refer to as "habitats" or "homes" rather than "tanks" — enables residents like the sand tilefish to build himself a nest underneath the reef's rocks just as he would in the wild. "He guards it, too," Ducharme adds. "You'll see his little head poking out."

She and her Shedd fellow divers try to recreate the wild in other ways. "We don't really have to worry about things like parasites, since everything goes into quarantine before it goes on the reef." In the ocean, tiny creatures such as wrasse and shrimp eat parasites off larger fish. To mimic the sensation of nibbles from these cleaning animals, Shedd divers sprinkle handfuls of sand over the fish. "The animals still like the feeling," she explains. "It's innate to them — I mean, imagine how many hundreds of millions of years that's been going on?"

Among the exhibit's most famous residents is Nickel, a green sea turtle who was wounded by a boat propeller on Florida's Gulf Coast. Despite months of rehabilitation, she could not heal enough to return to the wild, and Shedd welcomed Nickel to her new home in 2003.

The retelling of Nickel's injury during Ducharme's dive, complete with boat-horn sound effects, is dramatic, but nothing drives the story home like seeing the turtle fight against the unnatural tendency to float upward by her rear end. Because of the scar tissue that built up due to the incident, her bottom half is now more buoyant than her top, Ducharme explains.

The demonstration is a warning to visitors that enjoying the ocean and other bodies of water is best practiced with respect for the animals that call those waters home.

Shedd's respect for animals reaches wide. Since 1998, for example, it has been a key partner in international efforts to study and protect sea horses. Shedd is also one of 10 U.S. institutions trying to breed the vanishing Grand Cayman blue iguanas and return them to protected areas of their natural island habitat. But the aquarium's primary role continues to be providing greater awareness of the aquarium's animals, their habitats and the planet we all share.

For all the hours she's spent there, Ducharme says she's constantly discovering something new at Shedd. "You learn so much here," she says, "that when you go out in the wild and do a real dive, you feel like you know so much more than you would know if you didn't volunteer here. It's pretty awesome."

From a more personal perspective, her volunteer work has literally changed her life. On a trip to the Caribbean with fellow volunteers, she met her future husband at the resort where the group stayed. "So I indirectly met my husband because of the Shedd Aquarium."

Standing amid the throng of visitors who watch Ducharme as she goes to work inside the Caribbean reef tank, you hear comments of admiration, confusion — and even some concern.

"How would you like a job like that?" says one woman. "Go to work and go swimming?"

"Mommy, is that a real person in there?" asks a child.

"I wouldn't go near that thing," says a man, watching with wide eyes as a 4-foot-long bonnethead shark glides beneath Ducharme.

Some 2.1 million people visit the Shedd Aquarium each year, making it Chicago's largest cultural attraction. As she strolls through the busy corridors before her first dive of the day, Ducharme seems happy to blend with the crowd.

She scans the Waters of the World exhibit for a glimpse of one of the aquarium's pair of Grand Cayman blue iguanas — two of only 120 that exist in the world. Moving to the next exhibit, Amazon Rising, she points out to the surrounding visitors a green anaconda — so long, wide and still that none had noticed her among the half-submerged logs. They gasp with recognition.

"I love that," Ducharme says with a grin, "people being amazed by what they see. That makes my day."