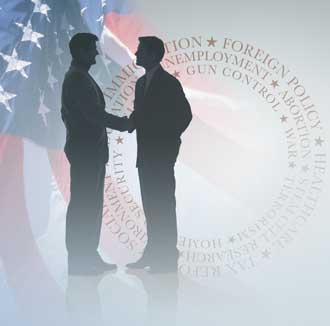 1.  We must engage the middle majority of Americans in the political process, who are fed up with the partisan bickering, to vote for more centrist candidates. The United States has one of the lowest voting percentages of any democracy in the world. However, the extreme elements, conservatives and liberals, are actively engaged and are currently controlling American politics.

2.  We must elect members of Congress that will put the best interests of the country before their political party and their concerns for re-election.

3.  Congressional members must elect more reasonable leadership that will meet with and listen to the other political side.

4.  The President must exert forceful leadership to insist that Congressional leaders utilize a bipartisan approach to reach a thoughtful compromise on public policy issues.

5.  We must dispel the notion that compromise is a bad thing in politics. In our democracy, it is inevitable that neither political side will get 100 percent of what they desire and neither political party has a lock on wisdom or credible solutions.

To return to our main story about Brad McMillan, click here .