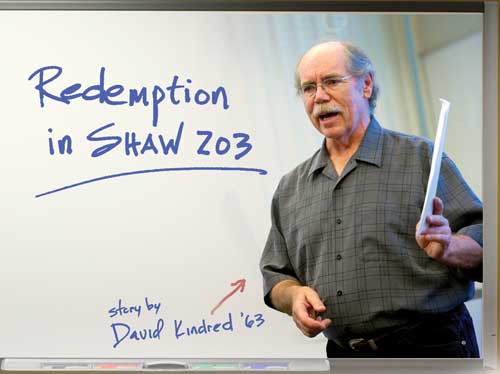 When a celebrated columnist taught a May Term course on writing,
it was his students who took him to school.

This spring, 48 years after I walked out of Shaw Hall, I walked back in. I had left as an English major. I returned as an adjunct instructor in the English department who rose each morning at 5:30 a.m. to fret about the 9 a.m. class. During the night, I scribbled teaching notes sideways through upside-down notes. Three hours I had to teach, every day, the 18 days of May Term. Three hours of talking? I love my wife but I hadn’t talked to her three hours in any day since the senior sock hop of ’59.

On May 4, in Shaw 203, to fill the first three hours of my Illinois Wesleyan teaching career, I introduced myself to the 14 students. I told them my work history. I told them my life story. Done, I looked at the clock. That took 12 minutes.

By May 12, I had come up with a better plan. I began with an hour’s laugh-riot lecture filled with anecdotes from a sports columnist’s brushes with greatness. (Muhammad Ali! Charlize Theron!) I sprinkled the lecture with gems of advice earned in decades of writing wretched stuff. (Death to Adverbs!)

Midway in the lecture, I noticed one student asleep. Another peeled a banana. A third put his forehead on his desk and kept it there, eyes shut. A fourth left the room. (Three times.) That was also the morning I announced a major assignment due the last day of class. I wanted 2,000 words on a topic that was sexy in a politics-as-entertainment way: “How Did Illinois Get from Honest Abe to Blago?”

The immediate reaction to the assignment was that everyone woke up. Then came rebellion. Students said it sounded like a history paper. Dull. Dry. Research. Two thousand words. Yuck. And due the day they’d be loading the car to get out of town.

That, they agreed to.

I caved and promised something different for get-away day.

The class was “Editorial Writing/Reviewing.” With the encouragement of then English Department chairman Jim Plath, I taught the course with emphasis on my life’s work, column writing. A “column” comes with the writer’s unique viewpoint. It’s opinion, commentary, character sketch, a slice of life’s color — any of those, all of those. It’s best done conversationally, tight and bright. In Shaw 203, for the first time ever, I scribbled a note in green marker on a classroom whiteboard: “Make words dance!”

At the same time, I handed out a list of advisories, cautions, and guidelines on how to choreograph the dance. Those suggestions baffled the students. One told me, “For us, ‘guidelines’ always is taken as, ‘You must answer this in this way.’ But you’re telling us to be original and creative. I’m confused.”

I said, “I want you to like writing. Writing’s hard, but done well it’s fun. We’re not doing any ‘academic’ writing here. We’re writing a little personal essay, a column. Write it the way you’d tell it to a good friend.”

Next time at the typing machine, she did just that. The assigned topic was a possible name change for IWU. She began: “Whenever the topic of a name change is brought up, I look to the infinite wisdom of the hit television show, ‘Friends,’ and the episode where Phoebe, on a whim, changes her name to Princess Consuela Banana Hammock. …” Her kicker was delicious: “Although Illinois Wesleyan University might come up with a better name change than Princess Consuela Banana Hammock, the decision would be just as fruitless.”

Three springtime hours in Shaw 203 is a day in a dog’s life, a week in a rookie adjunct’s. One morning, I paroled them.

“Get out of here,” I said, “and come back in an hour with a column. The topic is, ‘If I had to laugh myself to life, how would I do it?’” Typing in the Dugout, on a bench on the Quad, at Ames Library, they delivered columns on the Marx Brothers, a dog named Emma, and the ineffable happiness of feather-tickling.

They also delivered on a role-playing day when four “interviewers” quizzed “Lady Gaga” and “LeBron James.” Gaga was steamed at being uninvited to Oprah’s last show; James admitted he had failed Cleveland before bailing for South Beach. After the interviews, the 14 students divided into four groups to write team columns off the sessions.

In 18 days, we listened via Skype to eight guest speakers: a two-time Pulitzer Prize winner, two Pulitzer finalists, columnists from the Washington Post, Los Angeles Times, Yahoo! Sports and CBS Sports, and a distinguished alumnus, George Vinyard, who chairs IWU’s Board of Trustees.

In those 18 days, we wrote a dozen times. We wrote short, we wrote long, we wrote serious, we wrote funny. One student laughed about her coffee habit, another ached to help a suicide-prevention movement, a third imagined the Navy SEAL who erased Osama bin Laden (“6-foot-3, 220 pounds, a shaved head and scar under your eye”). As for the dreaded Lincoln-to-Blagojevich column, two historians did it in 1,500 tight, bright words.

I tried the students’ patience with quotations from The Elements of Style, the classic how-to-write book done by William Strunk Jr. in 1919 and updated in 1971 by E.B. White. On the whiteboard, I wrote Strunk’s usage rule 17: “Omit needless words.” I also wrote, “Read UP!” Read good stuff, stuff better than yours, stuff you wish you could write, copy it, copy it word-for-word to feel the rhythm, read it aloud to hear the sound. My “snowflake” theory is that every story has a piece that makes it different from all other stories; so I scribbled on the whiteboard: “Find the extraordinary in the ordinary.” Do all that, and sooner than later the voice you hear in the writing will be yours.

On the get-away day, May 27, everyone delivered a last column, short and fun. They also did a multiple-choice quiz that was the “something different” I had promised two weeks earlier. It asked questions such as …

We should read in what direction?

a) from left to right
b) north by northwest
c) up

A columnist can finish a column in one hour. How many columns can he do if he starts at 8 a.m. and finishes on deadline at 8 p.m.?

The May 27 columns were better in every way than those that thudded onto my desk in early May. One piece about a concert by the British singer/songwriter, Adele, was so lyrical that on that last day, with cars packed, with summer’s siren song on the air, I went to the whiteboard one more time and wrote:

We made words dance!

Dave Kindred has been a newspaper and magazine columnist for more than 40 years. He has covered sports for the Washington Post and the Atlanta Journal-Constitution. In 1991, he received the Red Smith Award for lifetime achievement in sports journalism and also received Illinois Wesleyan’s Distinguished Alumnus Award. Now living in central Illinois, the Pulitzer Prize nominee has written eight books. The most recent is Morning Miracle: A Great Newspaper Fights for Its Life, an in-depth, behind-the-scenes look at the Washington Post.