Illinois Wesleyan’s primary dining facility, the Bertholf Commons, is now trayless, meaning students visit the cooking/serving stations plate-in-hand, rather then “piling up” on a tray. The switch away from trays was made in response to a student initiative last year.

“I thought we’d have more complaints but the students adapted very quickly,” says Dave Nicholson, Sodexho general manager for the campus residential dining service. “We still have trays available but almost none get used.”

There’s the obvious reductions in water and detergent, but the primary savings is that going trayless causes students to be more thoughtful about the food they choose. “Students used to go to three stations and get three plates of food,” Nicholson says, “and one plate of that food would end up in the trash.

“The results of going trayless have been remarkable,” he continues. “We went from 600 pounds of food waste per meal to 650 pounds of waste per day.”

Starting in 2011, Illinois Wesleyan’s food services will join a larger community effort directed by Illinois State University to compost the area’s biodegradable food waste. “There are nutrients in food waste,” says Biology Professor R. Given Harper, “and they are wasted in a landfill. Why not put them back into the environment?” The composted food waste will be trucked to an ISU farm north of Bloomington-Normal and dumped into long piles called windrows, where it will age into a nutrient-rich natural fertilizing agent. Organizers of the project hope that more than a thousand semitrailer loads of food waste will be diverted from the local landfill through composting each year.

Other eco-friendly changes in the University’s food service include offering more organic and vegan food choices. “We go through 60 pounds of tofu a week,” Nicholson says. The number of vegetarian/vegan students has increased dramatically but many other students simply choose meatless entrees. Some favorites are roasted pepper frittata, bean tostado and eggplant Parmesan.

Another popular green addition is the new “hydration station,” which encourages students to carry reusable water bottles instead of disposable ones. Students can bring their bottles into the Commons any time of day and fill them from one of three attractive vessels filled with different lightly flavored waters.

As they study the environment, Illinois Wesleyan students are going on to change the world around them, both on campus and around the globe.

Students in the program take a wide variety of classes in disciplines across Illinois Wesleyan’s campus, from chemistry, biology and physics to history, political science and anthropology. They can choose either a general major in environmental studies or pursue a specialist degree in ecology, environmental chemistry, environmental policy or international environmental sustainability. The ES program addresses a broad range of issues concerning the relationship of human beings with the natural world. It is designed to provide students with a basic knowledge of the scientific concepts, societal factors — cultural, political and economic — and the ethical dimensions behind environmental issues.

Sixteen professors from different disciplines currently teach courses in environmental studies. Jahiel is a political scientist by training, with expertise in comparative politics and Chinese politics. Her current research focuses on environmental politics in China. The program’s associate director is Biology Professor R. Given Harper, whose research includes examination of pesticide levels in birds and other wildlife. Courses offered range from “Water Quality” and “Atmospheric Pollution” to “Comparative Environmental Politics” and “American Environmental History.”

“Non-major students often take an environmental studies class and then comment, ‘I never knew about this — you’ve opened my mind,’” Jahiel says.

Demand for such a program has grown in recent years, according to Jahiel. “Students in this part of the Midwest recognize that IWU has one of the more developed programs in Illinois,” she says. “One area where we’d like to see ourselves growing is in the area of environmental service.”

ES students also conduct research with faculty and, through internships, gain hands-on experience with organizations such as the Ecology Action Center, Greenpeace, Illinois EPA’s Governor’s Environmental Corps, The Nature Conservancy and several organic farms. Students have also spent time studying around the world, either independently or through travel courses such as May Term trips that Harper leads to study the tropical ecosystem of Costa Rica.

One such alumna is Leslie Coleman, who graduated in 2007 with a double major in environmental and international studies. She spent the summer following graduation working at an organic farm and then traveled to the Gambia in western Africa to work as a non-governmental organization development volunteer with the Peace Corps. She was joined by her husband Ryan Smith, a fellow 2007 ES graduate, who conducted environmental education work while in Africa. The pair recently returned to the United States, where Coleman earned a prestigious scholarship to study environmental law at New York University.

Jahiel is proud of such accomplishments and feels strongly that universities need to take the lead in changing how society functions in everyday ways. “We are hopeful that these changes and future educational efforts will yield further steps toward a truly sustainable university campus that teaches sustainability not only through the curriculum, but through its every action,” she says.

The roots of conservation run throughout the University 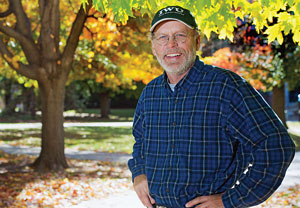 In days gone by, ground crews everywhere tended to blanket-spray with pesticides. That practice has been replaced at IWU with integrated pest and weed management. “Now we identify the disease and consider the best way to approach it,” says Grounds Services Manager Eric Nelson (shown left). “If it’s a bug that’s active, it might be that way for only a week or two, or the weather might change, so we selectively approach how to handle the situation. ... If there are a few dandelions, we let them go, but at a certain level we treat them.”

When it comes to cleaning, the University is trying to be more friendly to the environment and efficient at the same time. A new floor-cleaning machine at the Shirk Center uses ionized water, reducing the use of water and chemicals. Dale Conover, assistant manager of custodial services and GREENetwork member, says that he and his team learn about and test new organic cleaning products and also use water to dilute cleaners to different strengths for different uses. Toilet paper and rollover paper towels also contain post-consumer recycled content.

Soil conservation is among the key goals of the IWU Farm Committee, which encourages no-till and strip-till practices with all of the farmers working some 6,300 acres of Illinois Wesleyan-owned farmland. No-till slows erosion and run-off and starts to slowly rebuild organic matter, allowing more rainwater to be retained in the ground. The environment also benefits when less soil, fertilizer and chemicals are carried into the ground and surface water.

Each spring at the Shirk Center, the Illinois Sustainable Living & Wellness Expo brings new opportunities for people to discover how to live well and live green. “This is really about people discovering resources to help improve the quality of their lives, and having a great time doing it,” says Missy Smock, director of the University’s Wellness Program, which co-sponsors the event with the local Ecology Action Center. The expo includes educational workshops, food demonstrations, music performances, an eco kids’ carnival and a venue where local artists create pieces using recycled materials. Exhibitors last year included energy auditors who helped individuals assess how to cut energy costs in their homes.

To return to the start of the main “Green in Action” story, click here.