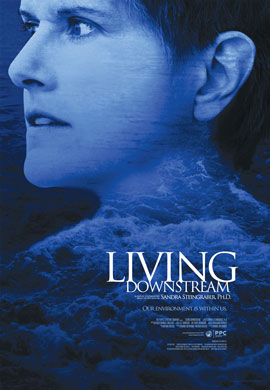 Reflecting on the release of a second edition of Living Downstream, Sandra Steingraber says, “I’m hoping all the problems in this book will be eliminated. I’m hoping there will be no need for a  third edition.”

Along with the new edition, a documentary film of the same name was released in 2010 (a DVD version comes out in 2011). The film follows Steingraber over one pivotal year as she travels across North America, breaking the silence about cancer and its environmental links. The Washington Post called this movie “handsomely photographed and powerfully argued … an arresting portrait.”

“Sandra’s book struck me because it was so visually written,” says Chanda Chevannes, the film’s producer and director. “She has a unique writing style. Through it I could see everything, from the Illinois landscape to the insides of our bodies. I thought, ‘This is the most cinematic book I have ever read.’”

“I like the fact that this movie will be able to reach communities in an entirely new way,” says Steingraber. “It is an accessible vehicle for this message.”

This October, as part of a screening tour for the documentary, Steingraber returned to Illinois Wesleyan to speak at the Hansen Student Center. No one wants to talk about environmental links to cancer, she told the audience, but quickly added, “Your silence will not protect you.” Because so much environmental news is depressing, Steingraber says, part of her challenge is how to keep her readers turning the pages. She says she’s able to do so because there’s also good news out there, such as the rise in popularity of organic food. During her talk, she encouraged the University to consider transitioning the farmland it owns into “organic farming systems … to serve as a living laboratory of sustainability.”

Steingraber is a scholar in residence at Ithaca College in New York. She is married to artist Jeff de Castro, “and they live in a 1,000-square-foot house with a push mower, a clothesline, a vegetable garden and two beloved children,” according to the bio posted on her website at steingraber.com.