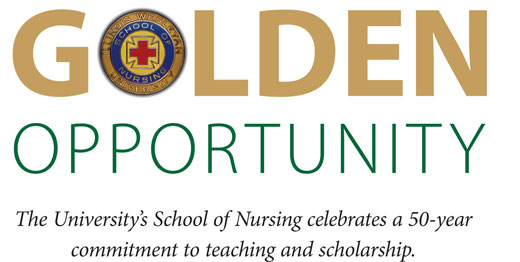 It’s been said that nurses are the heartbeat of health care. They were certainly the life of the party April 17 as nearly 250 School of Nursing alumni, students, faculty members and friends gathered at Illinois Wesleyan for a celebration five decades in the making.

It was in 1959 that the University’s four-year bachelor of science in nursing program was officially launched. The April event, titled Celebrate Nursing, Celebrate Gold, looked at how the fields of nursing and nursing education have dramatically changed since that first year and how the perception of nurses has evolved in society.

“This was an opportunity to recognize the role Illinois Wesleyan has played in nursing education, and to celebrate our alumni’s contributions to the field of nursing,” said Vickie (Noltkamper) Folse ’86, associate professor and director of the School of Nursing.

The event — co-chaired by Barbara (Carlson) Nathan, a 1980 nursing graduate, and Donna Hartweg, professor emerita and former director of the School of Nursing — also gave alumni a chance to reconnect with old friends and reacquaint themselves with the place where their nursing careers began.

Many shared Bult’s enthusiasm about the Nursing Intervention Laboratory in Stevenson Hall, where demonstrations showcased technological advances that allow nursing students to engage in hands-on learning in a realistic setting.

Sim-Man, a highly sophisticated patient simulator, was introduced to envious alumni who recalled somewhat less sophisticated practice methods of the past.

“The simulation dummy is fantastic,” said Beverly (Susina) Van Duyn ’68, a retired Air Force nurse and nursing teacher at New Mexico State University. “We used to practice on each other.”

“The bulk of our alumni didn’t have anything like this,” said Arleta deDianious, Nursing Interventions Lab coordinator,  who assists in individualizing the computerized simulations that drive Sim-Man’s many health issues. She can, for example, adjust Sim-Man’s heart rate and rhythms in minute detail. She can make her students’ hearts skip a beat, too.

“You can completely change his condition with the flip of a switch,” deDianious said. “With Sim-Man, you’re really only limited by your creativity.”

Included in the Ames exhibit were official School of Nursing uniforms, caps and pins from the past 50 years, and a pair of the orange and yellow molded chairs that graced Stevenson Hall classrooms for over four decades.

“I loved the exhibit,” said Kimberly Wolski ’08, a pediatric oncology and general pediatric nurse in Oak Park, Ill. “It was such a great tribute to nursing, and I really felt honored to be part of that.”

The nursing program’s rich (and, at times, rocky) history documented in the Ames exhibit was possible only through the vision and leadership of the late Lloyd M. Bertholf, who led the movement to create a full-fledged baccalaureate nursing program during his tenure as Illinois Wesleyan’s president. Another central figure in the program’s success was Mary Shanks, who directed the school during its formative years.

These early leaders “demonstrated a special depth of commitment that represents who we are as a school of nursing,” said Donna Hartweg — a sentiment echoed by President Richard F. Wilson.

“President Bertholf stood strong in his resolve to launch this program despite opposition at the time, and Dr. Mary Shanks hired faculty from the best institutions,” Wilson told the crowd gathered for lunch.

Opposition in those early days included hospital doctors concerned that students’ clinical training would be compromised by “all the work required for a bachelor’s degree,” as Bertholf noted in his memoirs. Of equal concern was the potential loss of control over a free source of labor that kept hospital costs low.

In its early years, the program was also challenged internally by those skeptical that the school could meet all of the many requirements for accreditation. Under the leadership of Shanks and the nursing faculty, the school, in fact, achieved National League of Nursing accreditation in just three years.

Today, IWU continues to be one of the few in the country to offer doctoral-prepared instruction to undergraduate students only.

“I wish I had appreciated my instructors more,” said Kathie (Broughton) Carr ’63. “I didn’t know what they went through. They paved the way for us.”

Some early nursing students, like Evelyn (Cornelius) Lantz ’41, paved the way for family members to follow in their footsteps.

“I’m very proud and amazed at the number of people here today,” said Lantz, who was especially delighted to be keeping company with Class of 2012 nursing student Lisa Strack — her granddaughter.

It’s no coincidence that Strack was drawn to her grandmother’s alma mater.

“Grandma was a strong influence; she stressed that Wesleyan really cares about its students, and that was very obvious when I visited,” said Strack.

This is not the first nursing anniversary Lantz has attended. In 2002, she was among the IWU alumni celebrating the centennial of the former Brokaw Hospital School of Nursing. Founded in 1902 at what is now the Advocate BroMenn Medical Center in Normal, the Brokaw nursing school formally allied with Wesleyan in 1923 to establish a five-year degree program. After graduating from this program in 1941, Lantz went on to become an instructor, helping educate nurses during World War II. She emphasizes the quality of the Brokaw program, which became the foundation for Illinois Wesleyan’s baccalaureate nursing degree.

“Brokaw always had a very strong program and very high standards,” Lantz said. “In fact, Mary Shanks was a graduate of the Brokaw School of Nursing.”

Looking back, Lantz sees far-reaching value in Wesleyan’s decision to create a four-year degree program. “Producing more well-educated nurses was the correct thing to do,” she said. “Think of the effect that had.”

The effect of that pivotal decision was personified in the distinguished alumni who shared their views during the afternoon’s programs.

Keynote speaker Sally Lundeen, a 1969 graduate and dean of the School of Nursing at the University of Wisconsin-Milwaukee, led her audience on a journey through nursing’s past, present and future.

“It is on the shoulders of giants that we stand,” began Lundeen, who pointed to nursing pioneers like Florence Nightingale for bringing caring, compassion, scholarship and leadership to the burgeoning field of nursing.

“Don’t forget the legacy of nursing; think about the past and carry it forward,” urged Lundeen, who discussed a number of factors influencing the field today, including the ongoing nursing shortage, the move from institution- to community-based settings and a knowledge explosion in medicine that is challenging both doctors and nurses.

“There is a huge amount of best practice information, but too little time to synthesize it, absorb it and translate it into practice,” said Lundeen.

Her call for “evidence-based practice” — bringing nursing research to the bedside — was shared by alumni and faculty who participated in the afternoon’s panel discussion “Contemporary Challenges and Issues in Nursing and Health Care.”

The panelists were Karen Zander ’70, an IWU honorary doctoral degree recipient who is internationally recognized for her work with clinical case management; Marsha Prater ’78, senior vice president and chief nursing officer of Memorial Health System in Springfield; Roberta (Pointer) Smith ’66, first recipient of the School of Nursing's Distinguished Alumni Award (in 1990) and its first graduate to be inducted as a fellow in the American Academy of Nursing; Jerry Durham, former director of the School of Nursing and chancellor of Allen College in Waterloo, Iowa; and Maria Hugo ’09, pediatric intensive care staff nurse at Children’s Memorial Hospital in Chicago.

Several of these panelists urged students to pursue — sooner rather than later — graduate education that will allow them to teach and conduct clinically relevant research.

“It’s so exciting to be back and see that passion and energy for nursing,” said Prater. “Nursing is who we are.”

That passion and energy didn’t wane, even as the golden sun began to set on this golden anniversary. Lively conversation continued that evening in the Memorial Center’s new Joslin Atrium, where the reception and dinner were spiced with the sounds of a student jazz combo and string quartet.

“There are so many fascinating avenues for nursing today,” said Phyllis (Ryan) Parrish ’65 of Belleville, Ill. “I wish I could do it all over again.”

Nursing student Jane Leach ’11 looks forward to those possibilities and believes the liberal education offered by Illinois Wesleyan will serve her well as a nurse.

“I love learning that the patient in front of me is a person,” she said. “Thanks to my education, I can try to relate to their ideas and background, and not just their ailments.”

Whether looking forward to a nursing career or looking back fondly on one, those who joined in the celebration are a living legacy of Illinois Wesleyan’s nursing program, a testament to the traditions that took root generations ago.

“Today we’re celebrating more than 50 years of tradition, history and excellence,” said Wilson. “I’m proud of this program, proud of the graduates, and proud of the fact that Illinois Wesleyan has a voice and contribution to the healthcare challenges facing the nation.”

One can only wonder at the ripples created by the Illinois Wesleyan nursing program over the past five decades, and what its contributions to the future will be.

As event co-chair Barbara Nathan said to her colleagues and classmates: “Together we are part of a tradition upon which the next 50 years will be built. Can you imagine what the School of Nursing’s stories will be in the next 50 years?”

Click here to read about how alumni are supporting the School of Nursing.

Click here to visit the School of Nursing website and see more photos of the 50th anniversary event as well as archival photos of the school’s history.