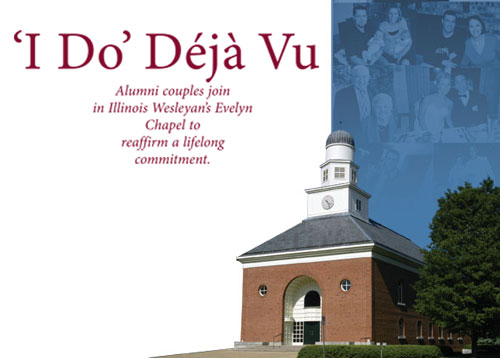 As if wanting to join in the celebration, the sun broke through the clouds on a brisk Sunday morning in October as alumni and their families streamed into Illinois Wesleyan’s Evelyn Chapel. Every year, an all-campus chapel service concludes the University’s Homecoming festivities. But what was about to happen at this year’s service was far from routine, as IWU Chaplain Hope Luckie asked the many married alumni couples present to rise and renew a solemn vow.

This was “Met and Married,” a first-ever Homecoming event in which Illinois Wesleyan alumni couples were invited to return to campus, renew their wedding vows and share their stories.

According to Director of Alumni Relations Ann Harding, 3,200 of Illinois Wesleyan’s 20,000 alumni are married to another alumnus. These 1,600 couples comprise 15 percent of the total alumni population.

“We thought that celebrating this, plus the 25th anniversary of Evelyn Chapel, would be a wonderful thing to do at Homecoming this year,” says Harding.

Harding admits that she observed the ceremony through tear-filled eyes, and she wasn’t alone. As dozens of couples from different faiths, backgrounds and generations declared again “to have and to hold from this day forward,” the chapel felt charged with emotion — and a strong sense of dj vu for the many of those couples who had also chosen Evelyn as the place for their first marriage.

One of those couples was Robb ’99 and Sarah (Sechrest) McCoy ’01, who first met at a Theta Chi spring rush party and married in Evelyn Chapel on Oct. 20, 2001. At the “Met and Married” ceremony — held just days before their eighth anniversary — Robb and Sarah recited similar vows, but with an entirely new set of feelings attached to the words.

“When we first shared those vows, they were said as a promise,” says Robb. “We knew we loved each other, and we knew we wanted to be together, but I don’t think we had any idea what marriage was really about.”

Sarah agrees. “Through eight years we have had a lot ‘for better,’ but we know what ‘for worse’ feels like,” she says. “When we looked at each other during the [“Met and Married”] ceremony and said ‘for richer or for poorer,’ we knew what it meant to be waiting eagerly for another paycheck. When we said ‘in sickness and in health,’ we knew what the other looked like after a few days of the flu.”

Another obvious difference between the two Evelyn Chapel ceremonies was the presence of their daughter, 3-year-old Elizabeth Belle.

“Being able to hold her while we repeated our vows made it very special,” Sarah says. “In a way, she is the culmination of the promises we made that day.” After repeating Luckie’s recitation of the vows, when many of the other couples in the chapel were reliving their first kiss

as man and wife, the McCoys shared a family kiss.

The moment, according to Sarah, was “absolutely perfect.”

There was one detail that daughter Elizabeth, at least, considered less than ideal. “On our way to the chapel, we told her that we were going to get married again,” Sarah explains. “When she saw that Mommy was wearing pants and a sweater, she was mortified. She said, ‘Wait! Mommy can’t wear that. She needs her princess dress.’”

Phyllis (Smith) Short ’47 stood in Evelyn Chapel facing her husband Lee ’44, holding his hands in hers. They weren’t standing at the altar, and she wasn’t dressed in an elegant bridal gown. Missing were the bouquet, the bridesmaids and the veil. But the vows she exchanged with her husband took on a far more special meaning than they had 62 years ago at their original wedding ceremony in Ransom, Ill.

“I felt grateful that we were still together and in that place,” Phyllis says. “It was really a beautiful and very meaningful ceremony.”

“The kiss was different,” Lee adds with a laugh.

With 62 years — and the births of four daughters, eight grandchildren and one great-grandson — between their wedding ceremony and their vow renewal, the Shorts found that many of the similarities between the two ceremonies had actually become differences. When it came to exchanging vows for the second time, Phyllis noticed that sharing more than 60 years of life’s triumphs and struggles with one man had changed her mindset.

“You’re more realistic. It’s just maturity,” she reflects, saying that when a marriage first begins, “you have all of these high expectations, and some of them come true and some don’t.”

When she first exchanged those vows with Lee in 1947, Phyllis, like many brides, found it difficult to concentrate on their meaning. “You’re thinking about details, wondering if everything is going all right, if somebody forgot something. The day of the ceremony I can’t say that I can remember anything special. It was just about concentrating on getting through it.”

While their wedding day remains a blur for both of the Shorts, returning to campus brought to mind several memories of their courtship. Lee began studying at Illinois Wesleyan in 1939, but when World War II broke out two years later, he joined the service. In 1946 he returned to campus, where one of his friends convinced him to become a houseboy for Delta Omicron, where Phyllis lived.

“I had the pick of about 20 girls. I don’t think she chose me,” Lee admits with a chuckle.

One of Lee’s friends was dating Phyllis’ best friend, who also lived at Delta Omicron. “He always wanted to fix me up with Phyllis so we could double date and they could use the back seat of my car,” Lee recalls.

Lee and Phyllis’ first date ended up being a double date with their two friends. After driving through a blizzard to the Delta Omicron house that night, Lee’s friend picked up his date and carried her through a high snowdrift into the house. “He was a tall guy, about six-feet, four-inches and she was about five-one. Phyllis weighed as much as I did. I was struggling, but I got her in there,” Lee says. “That was our first date, so we didn’t do much smooching.” Lee and Phyllis married in 1947, and Illinois Wesleyan remained a part of their daily lives during the 29 years Lee worked as IWU’s dean of admissions.

Through the “Met and Married” ceremony, Lee was also able to reunite with his old friend and Phi Mu Alpha brother Roger Miller ’49, who had also been his best man. School of Music alumna Arlene (Truscott) Miller called her wedding to Roger in March 1949 — during their senior years — an arrangement of “logistics.” Arlene transferred to Illinois Wesleyan during her junior year while her parents were serving as missionaries in South America.

“He gave me his pin in ’47 and we were engaged all that time before we were married,” Arlene says.

The couple decided to plan their wedding before graduation to ensure that Arlene would have somewhere to live after completing school.

“It was wonderful,” Arlene recalled. “You see, it was rather romantic. In 1948 and ’49 there were still barracks on campus, and it looked romantic, with all the young couples and the babies. It was so neat, so we thought it would be fun to be married.”

With the approval of her parents, Arlene began preparing for the wedding on her own, bringing a dress to a local seamstress and accepting her parents’ offer to bring the couple a wedding cake from Argentina. After learning that these details were the extent of Arlene’s plans, her parents arranged a reception for their daughter and the fianc they had never met. Her mother baked the cake in Argentina, carried it on her lap during their plane ride to the States, and her father decorated it upon arriving in Illinois.

“It was, ‘Who gives this girl away?’ ‘I do,’ and then he went behind the railing and he married us,” Arlene says. After 60 years of marriage, the Millers now have four children, nine grandchildren and eight great-grandchildren.

The secret of a long and happy marriage, according to Lee Short, is simply “trust and honesty.”

“And friendship,” adds Phyllis Short. “I can tell him anything, and we have all these common interests, mainly interest in our family. He’s my best friend.”