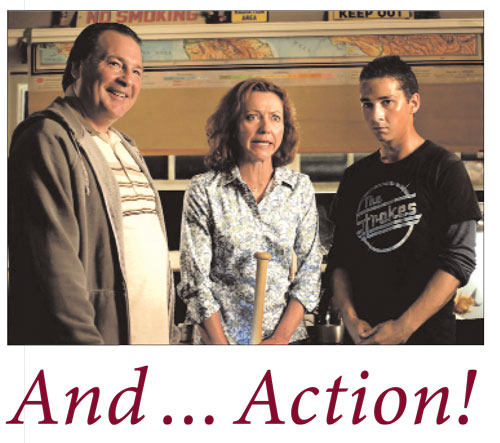 Actor Kevin Dunn ’77 gives a behind-the-scenes glimpse
into the making of a Hollywood blockbuster.

Homecoming 2009 kicked off with a bang — a lot of them, in fact, as actor Kevin Dunn ’77 hosted a screening of the explosion-filled, box-office hit Transformers 2: Revenge of the Fallen.

Despite the rainy autumn evening, a full house of alumni and students — including President Richard F. Wilson — gathered at the Hansen Student Center to watch the movie and meet Dunn, who returned to campus most recently as the 2008 Commencement speaker.

Cheers could be heard from the audience at Dunn’s first on-screen appearance as father of the teenage hero portrayed by teen idol Shia LaBeouf. Dunn’s role is equal parts slapstick and parental concern as he and costar Julie White attempt to come to terms with their son’s departure for college (not to mention his mission to save humanity from giant morphing robots).

Another cheer greeted an offhand reference to Bloomington’s own State Farm Insurance Companies — a line that Dunn said was his own addition to the script.

After the film, the former theatre major sat down with his mentor, Illinois Wesleyan Professor Emeritus of Theatre John Ficca, who introduced Dunn as “one of the strongest and most versatile student actors we’ve had.”

Ficca said that there were two kinds of actors — those who “play themselves,” and those who, like Dunn, are comfortable in a variety of roles. “Those are the actor’s actors,” Ficca said.

Dunn has appeared in dozens of major films, including Dave, The Path to 9/11, Nixon, The Black Dahlia and Lions for Lambs. He’s also had recurring TV roles on several hit series, including 7th Heaven and Boston Legal. Most recently, he portrayed the father of Christina Applegate in Samantha Who? and was featured in each episode of the ABC comedy’s two-year run.

Before moving to southern California, Dunn spent 12 years plying his trade on the Chicago theatre scene. He said he’d like to return to live theatre but added that there was something addictive about working in front of the camera with a cast and crew numbering in the hundreds.

“You’re just a part of this huge machine,” he told his Hansen Center audience.

In the Transformers films, that “huge machine” included a vast team of stuntmen and special-effects experts. Although audiences often assume that most big-budget action flicks like Transformers 2 are made in front of a green screen, with computer-generated backgrounds filled in later, Dunn said that “most of what you see was shot live.”

“They blew up more diesel and TNT than I’ve ever seen in my life” in the climactic battle, Dunn said. When actors appear in scenes like these, with explosions all around, “you’re not making a lot up, because it literally scares the hell out of you.”

Unsurprisingly for a seasoned actor, Dunn appeared at ease in front of the Illinois Wesleyan crowd as he answered questions about everything from working with Meryl Streep (whom he said was like “a mom”) to what famous film roles he’d liked to have played (Ahab in Moby Dick — or, failing that, Jack Nicholson’s part in Chinatown).

“I’ve been waiting for that question all night!” Dunn said after an audience member finally dared to ask about Dunn’s Transformers co-star and sex symbol du jour, Megan Fox.

While a student at Wesleyan, the Chicago-born actor was a member of Sigma Chi and the Titan football team. He starred in many student productions, including The Crucible and Guys and Dolls, and served as assistant director for The Pajama Game.

Dunn almost didn’t come back to school for his senior year after his father lost his job. But Ficca convinced him to return and hired him as scene-shop foreman. The practical experience proved as useful as the salary — Dunn worked as a contractor while launching his acting career, and he bonded with Transformers director Michael Bay over their shared love of construction.

In November, Dunn began shooting the action thriller Unstoppable with Denzel Washington. Although he admits that “it takes more guts and more inventiveness” to get into the film industry these days, Dunn is optimistic about the opportunities available to future Illinois Wesleyan School of Theatre Arts graduates.

“I’ve never been a believer in climbing up a ladder to success as an actor,” he said. “You just take what comes.”

He added that aspiring actors need to get used to taking failure along with success. As an actor, he added with a laugh, “you spend most of your life being rejected.”

And how does Dunn feel about Transformers, the kids’ action figures that inspired a multi-billion film franchise?

Click here to view an interview with Kevin Dunn about working on Transformers 2.

Click here to go to the School of Theatre Arts Web site .