Chickens for tuition among the ways Wesleyan weathered the Depression 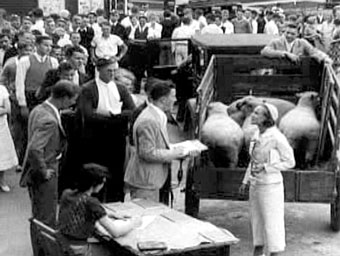 In 1932, at the height of the Depression, the nation’s movie-goers were treated to a newsreel short that featured Illinois Wesleyan’s fall registration day. What Paramount Pictures, as well as newspapers and radio stations across the country, came to report was something unprecedented. No one left disappointed.

The publicity was focused on Wesleyan’s “Produce for Tuition” plan allowing students hard hit by the Depression to pay their college costs in livestock and crops. The Argus reported, “All kinds of farm products were on hand. There were cows, pigs, sheep, chickens, a truck of oats, a truck full of cream cans.”

The Paramount newsreel (still shown at right) clearly staged some of these exchanges for maximum comic effect. (“I’d like to trade these rabbits for a course in multiplication,” one male student tells IWU Business Manager Nate Crabtree.)

The film ends with a solemn-faced Illinois Wesleyan president, Harry McPherson, stating that “Illinois Wesleyan adopted this plan … not for publicity sake nor because we had a dearth of students, but because we wanted to encourage worthy young men and young women to continue their educations.”

McPherson had reason to be solemn. The early years of the Great Depression were financially brutal for Illinois Wesleyan, which had accumulated a debt of nearly $300,000 with creditors quite literally pounding on the doors. Meanwhile, the University was struggling to collect unpaid tuition bills and faculty salaries were cut by over 30 percent.

In 1930, students, as well as local businesses, were asked to contribute an additional $25 to their tuition to support the school. By 1931, contributions totaled over half a million dollars, but financial difficulties persisted. There were rumors that the school might not open in 1932, but classes went on as usual, and there was even a slight increase in enrollment.

McPherson and Crabtree explored a variety of ways to cut costs for both students and the University, including offering students the chance to work in return for a portion of their tuition or room and board. For a short period beginning in January 1933, a portion of faculty salaries were even paid in scrip that could be redeemed at local merchants.

The student newspapers and yearbooks of these years give little indication that Wesleyan or its students had fallen on hard times. Sports and social events continued to dominate the campus scene — though a “Welfare Frolic” held in 1932 did ask for donations of food and old clothes as the admission price.

By the early 1940s, Wesleyan’s own adverse circumstances had improved. IWU’s new president, William Shaw, helped launch a campaign to increase the school’s endowment by a million dollars, as well as raise funds to improve campus facilities and build a new residence hall, chapel and student center. Slowly, the budget was balanced and the debt paid off, as the University, along with the nation itself, began to shake off a decade of hardship.

One monument to the Depression years remains standing: In 1937 ground was broken for a community stadium on Wilder Field, which had been used for University athletic contests since 1893. The $200,000 project was funded by the W.P.A. (Work Progress Administration), a New Deal agency. Illinois Senator and IWU graduate Scott Lucas gave the keynote address when the stadium opened in the fall of 1941, dedicating it “in the name of freedom and liberty for free men and women.”

Click here to read the stories of alumni who made it through the Great Depression.

Click here to view the 1932 Paramount newsreel mentioned in this story.