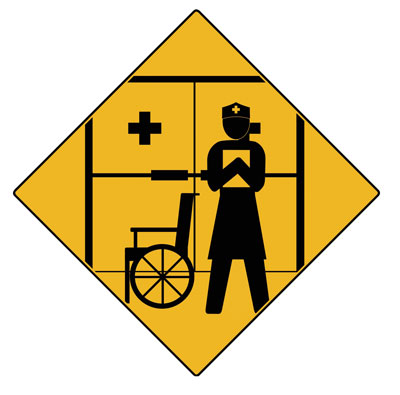 School of Nursing faculty and alumni help fight a trend that, if not halted, could directly affect the health care of millions.

As politicians and pundits debate how best to revamp the nation’s health-care system, one looming crisis is rarely discussed. America is in the midst of a serious nursing shortage, and predictions are it will only get worse.

“While the demand for caregivers is increasing, the number of caregivers is actually decreasing,” says Donna Hartweg, the Caroline F. Rupert Professor of Nursing, who stepped down this year as director of Illinois Wesleyan’s School of Nursing.

Hartweg cites statistics from the Health Resources and Services Administration predicting a 36 percent drop in the number of nurses in the workforce by 2010. This comes as 78 million aging Baby Boomers will place unprecedented demands on the nation’s health-care system in the coming decades.

How many nurses are available to help provide that care will be critical. A study by the Health Resources and Services Administration found that 24 percent of unanticipated adverse events in hospitals that resulted in injury, death or permanent loss of function were related to inadequate numbers of nurses at work. In addition, adverse events associated with less nursing care — such as pneumonia, patient injuries from falls and wound infections — result in greatly increased hospital costs.

The irony, Hartweg says, is that nursing schools across the nation are seeing an increase in applications. “It’s not a matter of getting students interested in nursing, but you have to have the faculty to teach nurses. We are turning away qualified students, just like everyone else.”

The American Association for the Colleges of Nursing estimated nearly 50,000 qualified students across the U.S. were rejected from nursing programs in 2008, due to nursing-faculty shortages as well as a lack of student-loan availability.

In the face of this shortage, the need for nurse educators is increasing greatly, says Hartweg, who serves on the Illinois Center for Nursing’s advisory board and formerly chaired the Illinois Association of Colleges of Nursing.

An aging generation of nurse educators is one of the factors contributing to nursing shortage, according to Hartweg. In 2008, nurse faculty vacancies continued to grow, with an 8 percent vacancy rate among baccalaureate and higher-degree programs.

While the average age of a doctoral candidate in other academic fields is 36, in nursing it is 55. “By the time many nurse educators begin teaching, they are only a few years from retirement,” says Hartweg. Studies indicate that by 2010 more than half the nursing educators in the U.S. will be of retirement age.

The traditional nurse-educator career path can be called a “degree of decade,” says Sally Lundeen, a 1969 Illinois Wesleyan nursing graduate who is now dean of the School of Nursing at the University of Wisconsin–Milwaukee (UWM).

“Nurses are statistically women who work for 10 years, and might have a family during that time,” says Lundeen. “Then they return for their master’s. After another 10 years, when they get their kids through college, they might return for a third degree.”

Lundeen is among those nursing-education leaders who are searching for ways to shorten this process. As UWM dean, she pioneered one of the first online doctorate programs for nurses in the country.

“The response has been absolutely stunning,” Lundeen says, noting the program now has students from more than 30 states around the country.

Faculty were skeptical of teaching online at first, admits Lundeen. So she decided to tackle teaching the first course on her own.

“I thought if the dean can’t figure this out, then I shouldn’t ask anyone else to do it. But I became a believer as soon as I started teaching, and other faculty have come around to the benefits as well.”

Flexibility is the key appeal for online students. “It’s great to be able to listen to a lecture and post questions at 2 a.m.,” says Ann (Steele) Eckhardt, a 2003 Illinois Wesleyan School of Nursing graduate who is part of a relatively new program at the University of Illinois at Chicago that allows students to go directly from a bachelor’s degree into a doctorate program in nursing.

“When I started a few years ago, I wanted to take a statistics course online,” says Eckhardt. “I was encouraged not to take it because people felt I would not get as much out of it.” Now her doctorate program is a combination of online and in-class learning.

“More than ever,” Eckhardt says, “online courses are opening up higher education degrees to nurses who would not have had the time to commit to going to class.”

With plans to finish the program in the next few years, Eckhardt will have a doctorate before she is 30. “I like the idea that I will be able to have 35 years of research ahead of me,” she says. “So many nurses wait [until] the middle of their careers to become educators. They do not have that time for research.”

While online programs can help speed the nursing-education process, it can’t replace the learning that hands-on experience brings. However, locating places to have quality interaction with patients has become another major challenge.

“Finding clinical sites is a huge problem for colleges of nursing, especially in community settings,” says Lundeen, who found a solution that has also provided invaluable medical assistance in her community. Over the years, she has established two clinics assisting the underinsured or uninsured in Milwaukee: the UWM Community Nursing Center and the House of Peace Community Center.

Along with assisting patients, Lundeen says the clinics provide a needed teaching platform for nursing students and faculty. “If you control your own site,” she explains, “it is much easier to place students.”

IWU School of Nursing alumna Kari Sand-Jecklin ’82 is also looking for innovative ways to provide nurses the training grounds they need. “We need to be looking at more creative ways to get students clinical experience within our limitations,” says Sand-Jecklin, who is a professor at West Virginia University. “Ideas such as a higher focus on simulation of environments or having students work on ‘off-peak’ times like nights and weekends may play a greater part.”

Sand-Jecklin takes a direct interest in how her students learn, knowing they will be the frontline in battling the nursing shortage. She developed a tool to measure nursing student perceptions of the clinical education environment, and publication of this research has resulted in use of the tool in the U.S. and internationally.

“I encourage students to work together in groups, knowing they learn from each other,” says Sand-Jecklin. “When I see students who are strong mentors with fellow students, I talk to them about becoming a nurse educator.”

Although the medical field increasingly recognizes the importance of nurses and nurse educators, salaries have not kept pace. According to Hartweg, possibly the greatest hurdle to encouraging more nurses to become nurse educators is compensation.

The National League for Nursing (NLN) estimates nurse educators earn only 76 percent of what their fellow faculty members earn. A recent NLN salary survey also shows that nursing professors make considerably less than fellow nurses working in health care. The same survey also found that, among nursing professors who plan to leave their jobs within the coming year, more than half cited “more compensation” as their primary reason for departure.

“It can be difficult to attract people to a profession when, even with 12 to 14 years experience, they are making less than nurses who are working as nurse practitioners,” says Hartweg.

Brenda (Deckert) Lessen ’89, who earned a doctorate in neonatal nursing studies in 2008 at the University of Illinois, has returned to Illinois Wesleyan as an assistant professor at the School of Nursing. She admits the salary-gap between nursing educators and practitioners is frustrating. Still, for Lessen and other School of Nursing alumni who have pursued education careers, such sacrifices pale in comparison to the rewards.

“I have made the choice to teach,” Lessen says, “because I love it.”

When Hartweg talks to nursing students about the possibility of become a nursing educator, she tries to emphasize the positives, such as greater flexibility of work schedules when entering the world of academia.

It’s an argument that works for Lessen. “I like the fact that I can pick my child up from school,” she says. “I do work nights with grading and planning, but I’m not working holidays or overnight shifts.” Her academic schedule also gives her more time to implement a pilot project at the neonatal intensive care unit of OSF St. Francis Hospital in Peoria, based on the model Lessen created for her dissertation.

While extolling the virtues of a field in nursing education, Hartweg doesn’t soft-pedal its demands. “Educators at Illinois Wesleyan are full-time instructors,” she says. “They are teaching full course-loads, advising students, doing research and assisting on University committees.”

Vickie Folse — current director of the School of Nursing and a 1986 IWU graduate — echoes Hartweg’s remarks. “It is a challenge to balance the demands of being a nurse educator with the desire to remain an expert clinician.” Folse is an advanced practice nurse who incorporates her ongoing clinical practice into classroom and clinical teaching.

“We combine a teaching team of full-time Ph.D.- prepared faculty with part-time master’s-prepared clinical instructors to assure the delivery of quality clinical experiences for our students,” says Folse. “The use of adjunct faculty is not only necessary to address the faculty shortage, but is appealing to students who benefit from working closely with faculty whose full-time job is at the bedside.”

Despite advances such as online education and the greater employment of adjunct instructors, the question of who will teach the next generation of nurses remains open. The National League for Nursing (NLN) points to the need to better recruit both men (who comprise only 5.6 percent of the nation’s registered nurses) and minorities (11.6 percent), both as nursing practitioners and educators.

The NLN also cites the need for greater federal funding in nursing training and development, as well as better pay for nursing educators. But in the midst of America’s ongoing financial struggles, those calls may largely go unheeded for some time. Although Illinois Senator Dick Durbin introduced legislation in February authorizing grants to increase the number of nursing faculty and students, the bill remains sitting in the House Committee on Energy and Commerce.

Hartweg and Folse both stress that an effective strategy to address the ongoing nursing shortage must include the recruitment of a new generation of nursing educators. For their part, Folse says, “Our School of Nursing faculty have been successful at directing graduates to pursue advanced degrees and will continue to encourage these young nurses to join the ranks of nursing educators.”