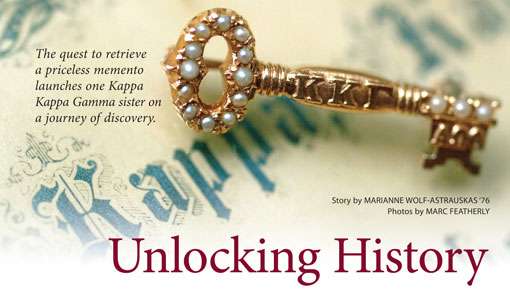 It was listing number 320277033796 on eBay, under the heading “Kappa Kappa Gamma, Historical Memorabilia, Jewelry.” The little golden Kappa key was available on auction for $349 and engraved with the name of a sister, Eleanor Ann Jones, initiated into the Illinois Wesleyan Epsilon chapter on March 9, 1940.

I sat, stunned by the image on my computer screen, overcome with memories of my own college days — the pledges, ceremonies and the meaning behind several generations of sisterhood. Most of all, I recalled the overwhelming pride I felt as my own shining Kappa key was pinned on my sweater, its significance almost impossible to forget. Like thousands of women before and after me, I’d pledged that day, among other things, to protect my badge.

Chosen to signify “unlocking the hidden mysteries in Science, Literature and Art,” the Kappa golden-key pin is the first and oldest sign of Kappa membership. In fact, the six founding members announced the formation of their new group at Monmouth College in Illinois on Oct. 13, 1870, by marching into required chapel service wearing keys in their hair adorned with the letters KKG so the student body would learn of the new women’s fraternity.

Because of its symbolic importance, keys can be worn only by Kappa members and may not be lent or given away except to fellow members. Like many national Greek letter organizations, Kappas are asked to make their wishes for their badges known to their families. Considered Kappa for a lifetime, a sister may have her badge buried with her, or left to a female family member who becomes a Kappa. The key may also be returned to a sister’s chapter house or Kappa’s national headquarters in Columbus, Ohio, where the Heritage Museum — which “acquires, preserves and presents Kappa memorabilia” — is located.

With all this in mind, I wondered, how in the world did a key end up for sale on eBay?

My curiosity set in motion a series of e-mails and phone calls to learn who Eleanor Ann Jones was and to find out how to get her key safely returned to the Epsilon chapter. The effort brought into focus my own Kappa experience as well as the larger context of the history of the Illinois Wesleyan Epsilon chapter, which celebrates its 135th anniversary this year.

In the 35 years since my initiation into KKG, I had not given much thought to my chapter’s history. No one has ever asked me to explain the bonds of sisterhood or why, as the oldest chapter continually in existence, the Epsilon KKG remains such a vital institution. But now I find myself reflecting on all the women who have made Kappa, with 134 collegiate chapters and almost 300 alumnae associations, what it is today.

In 1851, the first-ever collegiate society for women, now known as Alpha Delta Pi, was established at Wesleyan College. In 1867, 12 women at Monmouth College founded Alpha Delta, the first female fraternity in the Midwest and the first to use the men’s

fraternity as its model. That model was also adapted by the Monmouth women who founded Kappa Kappa Gamma in 1870 — the same year that Illinois Wesleyan’s Board of Trustees allowed women to enroll for the first time. And the first woman admitted to IWU was none other than Kate B. Ross, who founded the Epsilon chapter of KKG in 1873, along with her classmates Kate Graves and Millie Clark.

In the basement of the KKG house on Graham Street is a battered, wooden carriage wheel bearing a small plaque: “On a dark night in 1873,” it reads, Kate Ross drove home to Bloomington from Monmouth College, carrying the news of the founding of a women’s fraternity at that school and the inspiration to provide the same opportunity to the women of Wesleyan. According to Kappa lore, she later saved one of the wheels from her carriage as a memento of the journey.

“It may be more legend than fact,” admits Aislinn Lowry ’10, current vice-president of standards for the Epsilon chapter, but the wheel is still a potent symbol of the literal and metaphorical journeys that KKG’s early founders took. Aislinn herself understands the power of history: pinned to her blouse, beside her own KKG key, is a fleur-de-lis pin originally worn by an ancestor during the late 1800s.

Pioneering college women like Kate Ross likely chose to form such fraternities (the word “sororities” didn’t come into use until the 1880s) for many reasons. Consider the fact that, in the 1870s, male college students outnumbered women five to one on U.S. campuses. Combine that with the commonly held attitude, even among many college professors, that the pursuit of higher education was “unwomanly,” and it’s not surprising that the women of that time would want to establish a place of their own for friendship and support.

To me, these young women who formed fraternities such as KKG were feminists long before the term became popular. At Illinois Wesleyan, the first Epsilon sisters focused their studies on literary works, concentrating on orations and debates, and giving great care to their presentations. These women were all about self-improvement and aspired to the highest ideals for social development as “new women enjoying the privileges” of fraternal life. You can hear that clearly in the oration given by Kate Ross at IWU’s 1874 commencement. “Neither today, nor ever, can we forget to be grateful that four years ago the Wesleyan University invited to equal privileges sons and daughters. The darkness of the past has rolled away,” she declared. “Liberty is dawning.”

Ross would go on to become a professor of elocution and English at Hedding and Chaddock colleges. Her portrait above the fireplace at the Kappa Kappa Gamma house on Graham Street continues to watch over young women who find in that house lifelong “bonds of friendship, mutual support, opportunities for self-growth, respect for intellectual development, and an understanding of and an allegiance to positive ethical principles,” as the KKG mission statement avows.

When I reflect on this history, I come to the conclusion that the motivations for being part of Kappa’s Epsilon chapter 135 years ago are not all that different than the ones I had when I joined in the 1970s, and I suspect they are the same reasons that a new group of young women will join the chapter next fall. Being a Kappa makes one’s college experiences that much better — more purposeful, exciting and personal.

Continuing my quest to retrieve Eleanor Ann Jones’s Kappa key, I learned through the national headquarters and Illinois Wesleyan’s Alumni Office that Miss Jones had become Mrs. Brokaw and had been affiliated with the class of 1943. Further queries to Eleanor’s family revealed that she now resides in an assisted-living facility.

The national office also provided me with contact information for Mary Silzel. A loyal and determined alumna from the Gamma Gamma chapter at Whitman College, Mary volunteers for the Golden Key Association. Also known as the “Keepers of the Key,” this group of 40-some sisters throughout the country is united in its efforts to assure that cherished badges remain symbols of membership rather than jewelry and collector pieces. Toward that end, they will bargain, outbid and do whatever is necessary to return the keys to their rightful owners, to those owners’ chapter or to the Heritage Museum. So far, 230 badges have been rescued — many of them found on eBay, in antique stores or in pawnshops. Often, they are sold by family members who do not know the significance of the pretty golden key.

As anyone familiar with an eBay auction knows, time is the enemy. I needed to get in touch with Mary Silzel quickly. Without hesitation, she responded to my e-mail and launched a flurry of communications with Kappas coast to coast. Within hours, contact had been made with the current owner and seller of Eleanor Jones Brokaw’s pin.

Mary explained that the Keepers of the Key contribute whatever they can to make up the difference if it’s determined the original owner can’t manage the cost of buying back her pin. I contributed to bring this wandering pin back to our Epsilon family and began discussions with Kristen Hranicka, a junior at IWU and the current Epsilon president, for its safeguarding.

The KKG house at Wesleyan is full of memorabilia. Old photographs and awards hang on the walls of the stately parlors, and current members can flip through scrapbooks of bid cards, graduation programs and newspaper articles dating back to 1881. I wanted Eleanor’s key to have a place among these solemn artifacts, where new Kappas can see it and understand that they aren’t just members of an organization: they are part of a continuum, a sisterhood that extends into the past and future.

With the pin safely in my possession, Eleanor’s key came home to Epsilon in time for the 135th anniversary celebration held during Homecoming and will be used annually as a loyalty award badge given in Eleanor’s name.

I realize this story, on its face, may seem trivial to some. What’s all the fuss about a little key? But what I knew instinctively and was affirmed in my short study of Kappa history is that symbols are only as important as the ideals they continue to represent in the lives of the people those ideals have touched.

This year’s 135th anniversary of Illinois Wesleyan’s Epsilon chapter of Kappa Kappa Gamma is not just about Kappa. It’s about the women’s movement begun in 1870 as Kappa’s founders placed those golden keys in their hair and walked out into the world with a renewed sense of purpose: to listen to their inner voices, to make their own choices, and to discover

the strength to pursue their own ambitions. This is what Kappas do, what our alumnae sisters have  always done, and what the next generation to wear the key will do in the future, each of us supporting  the efforts of the other.

Click here to read about one KKG sister's surprising talent.