What Four Years Have Taught Me 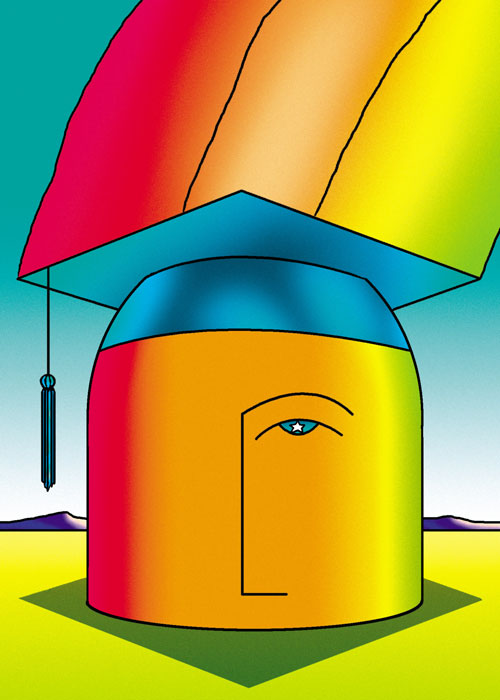 Whew! Just got out of another job interview. One yesterday in a downtown Chicago high-rise, a phone interview over my lunch break and another one this afternoon in the suburbs.

It’s tough being a new college grad. And expensive. I took the train up here from Bloomington — a $50 round trip. (That’s still probably cheaper than driving these days.) But that’s on top of the new shirt, tie, briefcase, padfolio and binders I had to buy, as well as paper, printing and mailing costs for about a million copies of my resume.

If I’d known four years ago what it’s like now, I would’ve done some things differently.

First, I would have listened to those people who were trying to tell me precisely what life is like after graduation. But no, I thought, why listen to them? They’ve only lived through it already. What would they know? No, I’m a college freshman. I can blaze my own trail.

That plan might have worked out okay, if my own trail didn’t connect after about five steps in any direction to the well-worn path leading to my waiting, comfortable bed. As soon as I arrived at school, professors, siblings and friends all warned me not to nap all the time and to get involved. Still, I thought I’d be fine relying merely on my wits and intelligence.

College kids the world over will expound upon the wonders of the afternoon nap.  There’s no better way, they’ll tell you, to put off writing that 20-page paper for a few more hours.

But they’re wrong, I’ve discovered. There are many better ways.

To begin with, there’s actually going to that class whose syllabus told you that paper was due tomorrow when you accidentally glanced at it, mistaking it in your post-nap daze for a First Wok menu.

But getting into the classroom is just the beginning of the battle. It’s what you do once you’re there that’s the important part. If, freshman year, I had spent half the energy I undoubtedly had stored up from all those naps on listening and participating in class discussions, I might have actually learned something — maybe even what to do with the rest of my life.

I guess the problem really boils down to a lack of confidence. Here I came into this school, surrounded by so many capable students and faculty, every one of them seemingly on a determined path to happiness and success. I felt lost in the mix. I wasn’t sure what to major in, what career path to forge or what classroom my Gateway seminar was in. But as it turns out, most of those seemingly sure and confident students around me were, and some still are, in the same boat.

IWU Admissions is selective. Everyone who gets in is smart. If you got in, you’re smart. And chances are you had more than a little success in your endeavors outside the classroom as well. You’re capable of doing great things. If you weren’t, you wouldn’t be coming here. But that doesn’t mean you have to do everything on your own.

Those same wise counselors, professors and friends told me it was fine to take some time when you get to college to really figure out what you want to do. They were right. Even at a small school like ol’ IWU, there’s an almost overwhelming number of options for majors, classes, extracurriculars and other opportunities. And it takes time to sort through them and figure out what will suit and help you the most.

The part I failed to understand, though, was that all the time in the world won’t help you if you don’t put some effort into figuring it out. Your perfect life path probably won’t just come to you in a dream (which is unfortunate, because then all those naps might actually come in handy). You’ve got to go to class, join some clubs and spend some time doing things to figure out what you do and don’t like.

I was lucky. Because my writing had been encouraged throughout high school, and because of my interest in sports, I started writing for the student newspaper, The Argus, my freshman year. I figured that writing game stories was a good way to stay in touch with my inner athlete without enduring the demanding practice and playing schedule of a college athlete.

Working for The Argus helped me figure out that writing was something I could use in the real world. It also inspired me to take an English class for one of my general education credits during sophomore year.  Now there’s a good piece of advice: If you’re not sure what you want to do, take a lot of your required general education classes freshman year in various fields. If something catches your interest, run with it. If it does the opposite, run away from it.

It’s through campus organizations that you can build some of the best and most beneficial relationships during your time at Illinois Wesleyan. Groups of people with common interests coming together regularly to exchange ideas — it doesn’t get any better than that. Some of my fondest memories are of working alongside the other editors in the Argus office into the wee hours, trading opinions about school, politics and life.

And your group’s faculty advisor is a great resource. There’s a reason they have those letters before their names — they know what they’re talking about. They have the knowledge (and chances are, a few connections) that will help you take the next step in your life after graduation.

The truth is, all faculty and school personnel are great resources. Use them. I waited until my junior year to walk over to the Career Center and ask about internships. Over the last year at my internship, in the public relations department of COUNTRY Financial, I’ve learned more about the real world than I did in any classroom — and made some money at the same time.

Get involved early. And don’t be afraid to go to your advisor, the business office, the registrar, the dean of students or any campus office for advice. The people who work there are experts, and they will all go out of their way to help you out.

I’ll leave you with a few more pieces of advice:

1.  Spend at least a couple weekends playing board games, going bowling (sober) or just sitting in the lounge talking. It’s nice once in a while to recall the innocence of your youth, and you’ll grow closer friendships out of those times than you will at any raucous party.

2.  But there will be more than enough time to enjoy yourself at one or more of said parties.

3.  Double major. If the one major you’re truly passionate about doesn’t have the best future job prospects, bite the bullet and add another major in something that does. Consider accounting. (If accounting is already your passion, you’re set.)

4.  Be respectful. Respect your professors. They’ve earned it. Respect your classmates. This means more than just not destroying hall property (it’s expensive), observing quiet hours and not pulling fire alarms at 2 a.m. the night before finals. Encourage those who put themselves out there and those who try to do great things. They’ll do the same for you.

As the saying goes, hindsight is 20/20. But in this case, I know the thoughts I’m sharing with you now are not 100 percent accurate.

As I write this in the week after receiving my diploma, my perspective is being shaped by fair amounts of alternating relief and frustration, joy and worry, and perhaps even a bit of regret. Still, I am confident that my experience at Illinois Wesleyan has left me with a much more informed view of the world than I had as a short-sighted freshman.

I’m sure the same is true for every young person who’s ever made the dizzying walk across the commencement stage. Change is inevitable. Embrace it.

Of course, some things will never change. Tuition will be expensive; students and faculty alike will err; wistful alumni will advise you with the knowledge they’ve gained on their path.

So evaluate what I say carefully. Think it through. Mull it over. Sleep on it.

Just not when you should be studying.

Dan Armstrong was a double-major in English-writing and sociology. He worked for The Argus for four years, serving as an editor for the final two. His future plans include a career in media or public relations.