Illinois Wesleyan promotes the conservation of legacy and land. 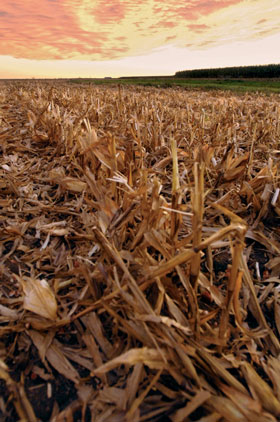 Take a drive from the Illinois Wesleyan campus out past the Bloomington-Normal city limits and you’ll soon find yourself surrounded by some of the world’s best farmland — land that each year produces millions of bushels of corn and soybeans. Powering these spectacular yields is the area’s rich, black soil, thousands of years in the making. Yet, in just the few hundred years since settlers began planting crops in these fields, much of this precious soil has been stripped from the land. Conserving what remains is a growing concern to Central Illinois farmers, as well as to landowners such as Illinois Wesleyan University.

IWU owns 28 farms across the state, totaling some 6,300 acres. All were donated to the University. “Sometimes there is no one left to take over the farm,” says Vincent Beggs, “and family members choose to donate the land.” Beggs is a 1952 Illinois

Wesleyan graduate and chair of the University Farm Committee, whose members are appointed by the Board of Trustees to guide policy on University-owned farmland.

Beggs, a retired State Farm Insurance Companies executive who owns farmland near Beason, Ill., has long been a crusader for farming practices that reduce erosion and improve soil quality. He began pushing for more conservation to be practiced on IWU farms at his very first Farm Committee meeting in 1999.

Since then, Beggs’ advocacy has merged with an overall drive by the University to take the lead in conservation and sustainable practices. In 2003 — the same year Illinois Wesleyan added “promoting sustainability” to its mission statement — Beggs was asked to chair the Farm Committee. Now conservation is among the committee’s key goals for University-owned farms.

Illinois-based Soy Capital Ag Services oversees management of those farms on behalf of IWU. Soy Capital negotiates leases with farmers who will work the land. “Every year we create a crop plan for the farms and discuss each practice with the farmers,” says Chad Hoke, who works with Kevin Meiss at Soy Capital Ag Services to manage the University’s farms. The Farm Committee’s goals are discussed with all of the farmers working IWU farms, says Hoke. “We look for farmers who are open to conservation methods, because this is one of Illinois Wesleyan’s goals.”

One such farmer is Jim Kinsella. A nationally recognized soil conservation advocate who has testified before Congress on the topic, Kinsella owns and operates Kinsella Farms near Lexington, Ill., and also works one of the farms in trust for IWU.

“Soil conservation is a continuous process, but the annual cycle begins after the harvest is complete,” explains Kinsella. The common farming practice in this area for decades has been to till the soil and bury the crop residue after harvest with plows, followed by one or more lighter tillage passes to control weeds and prepare the soil for planting.

Over time, such practices have resulted in “considerable soil erosion and reduced soil organic matter and soil quality on much of our prime farm ground,” Kinsella says. However, “we now have the technology to enable practices that reverse this process.” These practices, known as no-till and strip-till, “are proven to substantially reduce soil erosion and improve soil quality,” according to Kinsella.

Under Beggs’ leadership, the IWU Farm Committee has taken a proactive role in preserving the quality of the land they have been entrusted with by encouraging no-till and strip-till practices.

“Organic matter is the best measure of soil quality,” says Beggs, who points out that organic matter in many of the area’s topsoils has been reduced to half or less of what was there prior to tilling. No-till slows erosion and run-off and starts to slowly rebuild organic matter, allowing more rainwater to be retained in the ground. “Less run-off means less soil and less nutrients carried away,” says Beggs, “and also means more soil moisture for the growing crops.”

Beggs has seen soil quality improve on his own farmland with no-till. “When you walk on the soil, it’s soft and mellow, like walking on a forest floor.” Kinsella cites similar improvement on land he first converted to no-till in the 1970s. The environment also benefits when less soil, fertilizer, and chemicals are carried into the ground and surface water. Studies show that no-till farming may even help slow global climate change by trapping carbon in the soil instead of releasing its by-product, carbon dioxide, into the air.

Despite its advantages, no-till can sometimes be a tough sell to farmers, who are “generally very experienced and comfortable with their current tillage practices,” says Kinsella. Area farmers have been open to other methods to prevent long-term soil erosion, such as building terraces or waterways, but those “are one-time events and are government-subsidized,” he says. In contrast, no-till “requires a change in equipment, a three- to five-year transition period, and more detailed management.”

At the same time, no-till can reduce yearly fuel and labor costs as well as long-term equipment costs, says Kinsella. But its biggest savings are derived over time, as soil rejuvenated from no-till provides lasting yields. “Unfortunately, as landowners become further removed from the farm, their knowledge of soils and their proper care becomes limited,” Kinsella says, “and many do not recognize or care about these long-term benefits.”

Illinois Wesleyan is one landowner who does understand the importance of soil conservation, says Kinsella. “Under the leadership of the Farm Committee, IWU considers their land a long-term asset, and they are committed to practices which will improve the quality of the land, long-term.”

At Soy Capital Ag Services, Meiss says that of his more than 50 clients, Illinois Wesleyan University is one of the few landowners to continually push for conservation efforts. Practicing conservation methods is not mandatory for farmers working IWU farms, but encouraged. “The University is not cold and hard on no-till,” says Meiss, who notes that no-till is not part of any farmer’s lease. “It is clear that we encourage farmers to incorporate conservation methods into their practices when they can.

“I think other clients are conscious of conservation, but the University is much more proactive than other landowners. Few other clients are actively encouraging conservation efforts with their farmers,” says Meiss, who makes conservation suggestions part of the discussion in crop plans with farmers. “We talk about what changes can be made, and what they can afford to do.”

The Farm Committee is hoping for a gradual change to no-till methods for even more of the University’s farms, says Beggs, but it doesn’t want to force farmers to change if it means risking their livelihood. “It is a slow, friendly process,” agrees Meiss.

Conserving the land is part of an overall ideology of the Farm Committee to preserve the legacy of a farm. Unlike universities that sell donated farmland for the cash value, IWU generally maintains its land as working farms. “I think it speaks strongly for Illinois Wesleyan that we have a tendency to keep the land and an interest in taking care of it,” says Beggs.

“If you understand the farming community, you understand that, for the most part, long-term landowners who donate land loved and cherished it. We feel they would like us to treat it the same way,” says Beggs. “The University has been good at doing just that.”