As an Illinois Wesleyan student, John Camardella ’03 was a standout on the Titan varsity basketball squad, earning co-captain and “Most Valuable Players” honors. Among fans, he was known for his knack for providing baskets and rebounds when they were most needed.

The former history major is still providing help where he feels it’s most needed, but now his arena is not a basketball court, but the world stage.

Teaching at Prospect High School in Mount Prospect, Ill., Camardella feels a special obligation to convey to his students the knowledge and values he holds dear. So when he received an invitation to attend a conference called the Quest for Global Healing in Ubud, Bali, in May, he didn’t hesitate to sign up. Shortly after his return, IWU Magazine asked Camardella to describe some initial impressions about his experience. He wrote the following:

“As a Midwest Delegate for The ONE Campaign (one.org), I attended the Live 8 concert in Philadelphia last summer. The concert events were a push by Americans and the citizens of the other G8 Nations to alert their respective governments to the poverty and AIDS issues in Africa. It was a good start to solving these immense issues.

“At the concert, I was handed a flyer outlining a group called The Peace Alliance. They were pushing for the United States government to form a Department of Peace as part of the President’s cabinet whose job would be to provide peaceful solutions to international conflicts and tensions. I immediately signed up and started donating to the group. In February, I started receiving letters and e-mails from the Peace Alliance inviting me to attend ‘The Quest For Global Healing’ (www.questforglobalhealing.org) on the island of Bali, Indonesia. At first I was hesitant, due to the recent terrorist attacks on the island, but after careful consideration and a quite a bit of planning and fund-raising, I decided I would go.

“As a history teacher, I felt I owed it to myself and to my students to attend this world gathering to see for myself what was being said about the major issues facing our planet by countries other than America. The experience was life-altering.

“I attended sessions held by foreign diplomats, heads of state, religious leaders, and activists. I was lucky enough to spend a few private minutes in conversation with the Archbishop of South Africa, Desmond Tutu. He has always been one of my heroes due to his work to end apartheid in his country and his dedication to working for a lasting peace on this earth.

“I also became friends with the grandson of Nelson Mandela, Cedza Dlamini. He and I had a wonderful conversation about what American high school students are missing from their lives. His answer, ‘Passports.’ It was a great exchange that I actually recorded on video and have shown to all my classes. He explained that if we understood the world’s diverse cultures through personal learning experiences, American students would understand the world much more clearly and truthfully. And to do that, they need passports.

“I can honestly say I now have a much clearer global view due to the time I spent on the other side of the world. I see the human race as a complex organization with the same needs and goals despite where we were born, what we believe, or how we live our daily lives. I believe it is up to this next generation of Americans to fight to make that famous phrase, ‘Unity within Diversity,’ a realization among the nations of the world.” 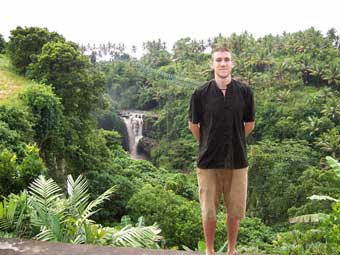