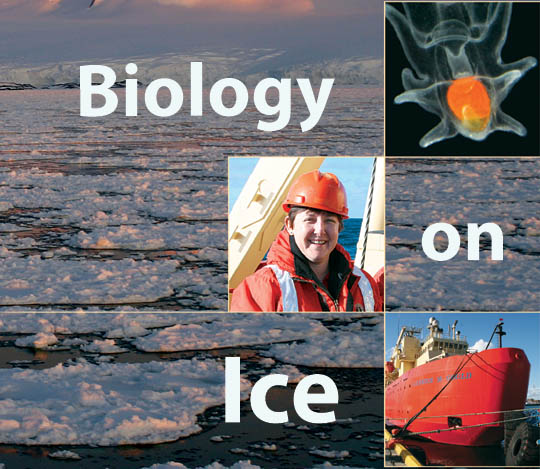 Two Illinois Wesleyan scientists traveled to Antarctica in search of life.
What they found surprised even them.

Antarctica — the glacial continent surrounding the Earth’s South Pole known for its remote and hostile environments — might seem like an unlikely destination for two biologists intent on studying the processes of life. But when Illinois Wesleyan biology professors Elizabeth (“Susie”) Balser and Will Jaeckle were invited to join a four-week research voyage to the planet’s last vast wilderness, they eagerly accepted.

On Nov. 23, the National Science Foundation-funded research cruise aboard the R/V Laurence M. Gould departed from Punta Arenas, Chile. In the month that followed, Balser, Jaeckle, and other scientists onboard relished the rare opportunity to collect and study the invertebrates — animals without backbones — that thrive in the cold but nutrient-rich waters surrounding Antarctica.

Compared to the millions of years those creatures have had to adapt to the extremes of the Antarctic environment, Balser and Jaeckle had just a few days to adjust as temperatures plummeted and the seas grew rough. The Illinois Wesleyan scientists also had to get used to a demanding schedule, working two four-hour shifts each day collecting and examining specimens for the expedition’s main scientific project and then spending another eight hours daily pursuing their own individual research. By midnight, they would crawl into their bunk beds in the small cabin they shared, only to start again at 6 the next morning.

“We were so busy that I don’t think it was until very late in the trip that most people realized we’re a married couple,” said Balser. That doesn’t mean their journey was without its enjoyable moments, many of which Jaeckle and Balser described in daily journal entries posted on the University’s Web site (the sidebar story on page 28 contains excerpts from this journal). Chief among those pleasures, aside from the appetizing meals served in the ship’s galley, was the chance to witness firsthand one of the world’s last truly unspoiled refuges. Because it was summer in the Southern Hemisphere, the weather was relatively mild for much of the journey, and when they could spare a minute or two, Balser and Jaeckle would stand on the second-level deck to photograph and soak in the panorama of pristine beauty.

“The scenery in this region of Antarctica is striking, yet none of our photographs correctly capture the beauty of this junction between land and sea,” Jaeckle wrote in his journals. “One loses all sense of distance and scale here — what seems a stone’s throw away may be five miles distant. The mountain tops that are clearly small (by absolute, not Illinois standards) actually rise several thousand feet above sea level. It’s easy to feel small in Antarctica.”

While the scenery was fabulous, Balser and Jaeckle came for the science. As part of a team led by Ken Halanych of Auburn University and Rudi Scheltema of the Woods Hole Oceanographic Institution, the biologists investigated animal populations in waters that extended from the southern tip of South America down to below the Antarctic Circle. Thirty-million years ago, the two continents separated, and water gradually began flowing all the way around Antarctica in strong currents. The bottom-dwelling organisms living in Antarctica’s coastal waters became isolated and over time evolved into a new “local” fauna that includes species which exist nowhere else in the world.

Yet, despite the “genetic drift” one would expect when members of a common species become physically isolated from each other over millions of years, scientists have also detected some surprisingly close similarities between some marine animals — such as mud-dwelling sea worms and echinoderms (sea stars and brittle stars) — living off both the South American and Antarctic coasts. It appeared those animals had somehow maintained “contact” with one another, but how?

One theory is that the tiny developmental forms, called larvae, of these species were being passively carried for long distances by ocean currents. It is a phenomenon observed in tropical ocean waters, but in this case larvae would be moving across the Drake Passage — a deep, narrow channel between the southern tip of Argentina and the northern coast of Antarctica known for having some of the roughest sea weather on the planet. During their trip, Jaeckle and Balser helped conduct numerous samplings of waters in the Drake Passage to find larvae, and also dredged samples from the sea bottom of adult specimens, both in coastal areas of eastern Argentina and in icy waters surrounding the Antarctic Peninsula. These samples will be genetically tested in U.S. labs. If scientists find a DNA match between the adult species on either coast and the “water babies” floating on the currents in-between, then larval dispersal across the passage could be considered the most likely reason for the commonality.

A main task of the research expedition was to gather enough samples to clearly establish this link. “Finding larvae that are at most a few millimeters in length in such a volume of water is challenging,” said Balser. “We increase our odds of collecting larvae by filtering large volumes, actually millions of gallons, of water through a net with a mesh size small enough to capture the animals, but large enough to allow water to pass — thus concentrating the animals in our samples.”

One innovation that Balser and Jaeckle had used on previous trips proved highly effective when sampling waters in the Drake Passage. While the most common technique is to drag the net through the water at speeds of one to three knots, the Illinois Wesleyan scientists suggested that better quality samples could be obtained while the vessel drifted upon the wind and ocean currents at much slower speeds. The advantage of these “drift tows” was clear, Jaeckle explained, when you consider the fragile compositions of the invertebrate larvae they were trying to capture. “You might think of their bodies as being made of Jell-O, and you might be able to predict what happens to these larval forms when they are collected using a fast-traveling net.”

Because the species they were looking for were not visible with the naked eye, microscopes were used to sift through the dense muck of other types of zooplankton and phytoplankton (plant-like cells) that made up the bulk of these samples to find the larvae and other animals. It was a time-consuming, painstaking process. As Jaeckle wrote in one of the daily journal entries, “The greatest challenge to success is the continuous vibration of the (ship). Imagine trying to take a picture of an animal that sits atop a washing machine during the spin cycle. Acquiring an acceptable image is difficult” — but necessary, in order to sort them by categories and then preserve them for more detailed study back home.

The retrieval technique was different for the bottom-dwelling adults that were sampled from coastal waters, but just as challenging. “To collect animals from the sea floor we drag a trawl net over the bottom, much the same way that bottom fish like flounder are caught,” Balser explained. Sorting through the net — often full of rocks and sand — also took several hours for each sample but yielded an astonishing diversity of specimens. As Balser wrote in the journal, “Every sample brings the anticipation of discovery — fuel for the curiosity that pulled (and continues to pull) humans to this land of frozen blue ice and jagged, rocky mountains.”

Among the expedition’s more unusual finds were several specimens of a small, shell-less “winged” snail with features which may indicate that it is holoplanktonic, living its entire life in the water column. Jaeckle called the find “a bit of a mystery,” adding that more extensive study of the creature would be an ideal research project for Illinois Wesleyan biology students.

Jaeckle was also successful in his attempt to find and study live samples of invertebrate larvae — including sea star echinoderms and ribbon worms — as part of his ongoing research in how such species transport nutrients to all parts of their bodies. Because the specimens he collected are much larger and live longer than their counterparts in warmer climates, Jaeckle anticipates that their metabolic processes will be easier to detect.

Most significant to Balser’s research was the collection of several types of tiny animals called pterobranchs. About five millimeters long, pterobranchs live in tubes at the sea bottom. “I’ve never before seen such abundance or such large specimens of these pterobranchs as I saw from our trawls on this trip,” said Balser. “Very little is known about these creatures, in part, because they are rare in more accessible oceanic waters.”

Balser collected as many as five different species of pterobranch on the cruise and was able to bring living cultures back to Illinois, where they are now undergoing metamorphosis from juveniles to adults and establishing colonies in their new home: IWU’s Invertebrate Zoology refrigerator. She hopes that the unusual opportunity of being able to study living colonies of pterobranchs in a laboratory setting will help answer some fundamental questions about the biology of this group and the evolution of a closely related phylum, the Chordata, to which humans also belong.

Getting those samples back alive from South America to Bloomington was a notable feat in itself. “The process of explaining to airport agents, in two languages, that the animals we were bringing back with us do not like X-rays was most interesting,” Jaeckle observed. But along with the inevitable questions and suspicions, the couple were surprised by the number of people who shared in their scientific zeal, such as the food vendors who provided ice to keep the samples, stored in thermoses, cold. Or the security person who spilled some water from a sample onto the conveyor belt and then encouraged a coworker to touch the water, saying, “When in your life are you going to get another chance to touch seawater from Antarctica?”

Balser and Jaeckle, now both on sabbatical, are looking to have that chance again in a few years. Their tentative plans are to return to Antarctica during the dark, colder winter months. They are also looking at the possibility of one or more IWU undergraduates joining them. In the meantime, Jaeckle said, “We brought enough material back to the laboratory for several years’ worth of work.”

A large part of that work will be “determining just what we have, based on describing the development and morphology of the animals and on genetic testing,” Balser said. “But we certainly returned with animals I’d never before seen.”

> To see a slideshow of photo highlights of the Antarctic research trip, with captions written by
IWU Biology Professors Susie Balser and Will Jaeckle, click here.

> To read much more about this Antarctic research trip, including a daily journal, click here.