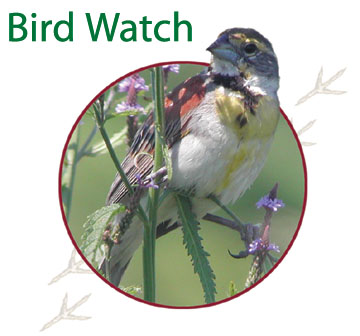 IWU researchers’ discovery of pesticides in songbirds
and other wildlife has disturbing implications for humans.

Professor R. Given Harper is extremely devoted to wildlife. Just ask his neighbors.

A few years ago, after the Illinois Wesleyan biology department chair had placed a nest box for screech owls in a tree in his backyard, neighbors would see Harper up in the tree each night, chasing out squirrels. His dogs would bark at the pesky rodents, his young son would spray them with a squirt gun, and eventually the harassed but distinctly non-endangered species got the hint. The tree now provides a comfortable home to a nesting pair of screech owls.

Harper’s fascination with birds began during his childhood in Kentucky, when the 5-year-old future ecologist was enthralled by a captive kestrel. “It was the most beautiful thing I’d ever seen,” he recalls. A book about birds from his grandmother soon followed, and an avid birdwatcher was born. As he grew older, Harper became a falconer and learned to rehabilitate injured hawks and owls.

During today’s conversation, Harper pulls a book about birds from a shelf in his office in the Center for Natural Science. Thumbing through the illustrations of various species, his voice takes on reverent tones as he describes small warblers as “gems” and “absolutely gorgeous.”

Harper combines his obvious love of songbirds with a scholarly focus, in research that has shown how warblers and other small birds may be facing dangerous levels of exposure in their environment to the same types of pesticides that endangered the bald eagle.

In repeated studies, a research team assembled by Harper has found that, despite the ban on organochlorine (OC) pesticides in the U.S., these substances are still found in our wildlife. Because they are water insoluble, such compounds tend to persist in the environment for long periods of time, Harper explains. Because they are fat soluble, they tend to concentrate in living organisms. And they are “biomagnified” — that is, they increase in concentration at higher levels in the food chain. In sufficient quantities, OC compounds become “endocrine disruptors, which means they can either mimic or inhibit hormones,” Harper says. If this occurs during embryonic development, male organisms can become feminized, and female organisms can become masculinized.

“When we first started this research in 1996-97, there was very little information in the scientific literature as to whether smaller birds were contaminated,” says Harper. “Some populations of birds are declining, so I became curious as to whether pesticides may be at least in part responsible for their population declines” — though he notes that other factors, such as habitat loss, likely play a role.

During Harper’s first sabbatical at Illinois Wesleyan, he coauthored a National Science Foundation grant proposal with Jeff Frick, associate professor and now chair of chemistry, whom he had approached about collaborating on the pesticide research. The grant provided funding for gas chromatograph and mass spectrometer devices used to detect and measure pesticide levels in organic samples.

Having the equipment on site allows them to maximize hands-on experience for students participating in the research, Frick says. Harper notes that many specimens studied in the lab “are window or tower kills — the birds are killed as they fly into them at night when they migrate.” After a specimen’s tissue is extracted, it is purified and analyzed to detect the presence of pesticides and their metabolites.

The IWU team’s analysis of those tissue samples has provided compelling clues along the trail of OC pesticides.

Birds that breed in North America and migrate to Central and South America for the winter were found to be contaminated with pesticides — including DDT, which has been banned in the U.S. for more than three decades. Although a Persistent Organic Pollutant treaty recently ratified by the United Nations bans 12 of the most harmful compounds in most nations, it has been difficult to determine the extent of pesticide use in other countries, Harper says. Reports of their use have included Venezuelan farmers intentionally trying to poison dickcissels — songbirds that breed in North America and migrate to Venezuela in the winter — with OC pesticides in an attempt to prevent them from eating grain crops.

Despite such practices, examination of specimens collected in three South American countries by Harper’s collaborator, Illinois State University biology professor Angelo Capparella, yielded unexpected results: those birds that spent their lifetimes in the southern continent had a very low frequency of pesticide contamination.

Harper says further study is needed to determine conclusively the validity of this finding, particularly in agricultural areas prone to heavier pesticide use. But the results are an intriguing contrast to their analysis of birds residing solely in North America. Among those specimens, a surprisingly high frequency, and high levels, of contamination have been detected.

Harper concludes that the U.S. is, in fact, a major source of pesticides found in songbirds. “I think a number of factors are responsible for our findings,” he says. “The U.S. used a tremendous amount of (organochlorine) pesticides before they were banned, and they’re very persistent in the environment.”

Another possible reason, says Harper, is that “when these pesticides are used, they’ll circulate in the atmosphere around the globe for up to one year.” North America appears to be particularly vulnerable to this phenomenon: it’s been documented that OC compounds are deposited more heavily at northern latitudes, carried by wind and rain, and the colder weather makes it harder for such compounds to escape again into the atmosphere, as they do more easily in tropical regions.

“We have an ongoing study now ... with North American birds from three different latitudinal gradients,” says Harper. “We’re predicting that birds that spend more time at the northern latitudes will have higher pesticide levels.”

Additional research by Harper’s group will test the hypothesis that pesticide levels increase at each trophic level, each step up the food chain, because of the greater quantities that larger animals consume over longer lifespans. Harper and his collaborators have devised a study of biomagnification, which will measure pesticides in tree bark eaten by deer in Minnesota, then the levels found in the deer, and in wolves that feed on the deer.

Although the data are still being gathered, student researcher and biology major Amanda Solliday ’06 notes that the presence of pesticides in wolves, who are at the top trophic level, suggests an unpleasant parallel for humans, at the top of our respective food chain.

For Amy Cadwallader ’06, who also works with Harper, such findings are unsettling. “All of these things have so many different pesticides in them, it’s kind of scary — they’re in everything,” she says. “I hadn’t really realized that before.”

Harper approaches these studies with conflicting emotions. While publishable research generally involves finding contamination, a part of him hates to discover that pesticides are — proven by their own data — persisting in the environment. Such findings underscore the larger environmental themes of how actions in one part of the globe affect another, and how actions in ignorance can trouble generations to come. The primary lesson from this, Harper believes, is “err on the side of caution.”

The need to exercise more caution — to practice the “precautionary principle” — also has been espoused by famed biologist Sandra Steingraber ’81, a correspondent of Harper’s who mentions his bird studies in her latest book, Having Faith: An Ecologist’s Journey to Motherhood.

While Frick finds his collaboration with Harper a good blending of their expertise — his in the extraction and analysis of the compounds, and Harper’s in the ecology and statistics involved — he realizes chemistry and environmental mindsets don’t always blend so well. Environmentally safe chemistry can be a challenge, he says, because “you don’t necessarily know what the problems are going to be ahead of time. Therefore you get things like DDT that are out there in the environment that have these negative impacts. But, at the time DDT was developed, it was seen as a miracle chemical in terms of stopping the spread of malaria and things like that.

“I don’t know many biologists who aren’t environmentalists,” says Klemens, a former student of Harper’s who recently completed his doctorate in plant ecology at the University of Pennsylvania. “You can’t study the environment without coming to a pretty fundamental appreciation of the interconnectedness of human beings and natural resources and species.”

What you do about that realization is another matter, as Harper is keenly aware.

“The more I’ve studied and the more I’ve learned, the more I’ve felt compelled to try to make students and other people aware of the problems that we face,” says Harper, who joined IWU’s faculty in 1992. “Teaching environmental issues, talking to students, I find myself thinking, ‘Well, if I want students to do this, to basically change some behaviors, I need to change my own behaviors.’ So it’s been a process of self-discovery.”

“There are a lot of environmental problems in the world today and there are many negative things occurring. But if you’re going to just simply talk doom and gloom, then most people will say, ‘Well, what’s the use? Why should we do anything?’”

He personally believes that there is hope; that means can be found to live sustainably on the Earth. To combat feelings of “doom,” he asks each of the students in his Environmental Issues class to report a success story during the course of the semester.

An example for himself is the Environmental Studies Program, an interdisciplinary minor which he helped establish in 1998 and now directs with Associate Professor Abigail Jahiel. Harper also chaired the education committee of the Green Task Force, formed at IWU in 2000 to offer recommendations for improving campus environmental stewardship, including a revamped recycling program that has increased the gathering of recyclable wastes by approximately 20 percent. Aware of IWU’s success, nearby Illinois State is seeking advice to improve its own program. Harper and Jahiel are particularly pleased that their goal to have a sustainable campus is addressed in Illinois Wesleyan’s new mission statement and proposed vision statement.

Discussing his pesticide research and the “chemical-intensive paradigm” that persists in modern agriculture, Harper nevertheless voices optimism in noting the marked increase in organic farming. He believes small changes are important, even in the face of global-scale environmental challenges.

“I used to get so upset about tropical deforestation and the loss of biodiversity. I decided I need to do something,” Harper says. “I can try to change the world around me here on campus; I can try to educate students and others, and I view that as my contribution.

“Very few people are going to change the entire world. What you can do is change the world around you, and I tell my students that if each of them goes out and does that, then, collectively, they’re going to have quite an impact.”

> To read about Illinois Wesleyan students who work as researchers in Given Harper's lab, click here.