Demetria Kalodimos’ documentary lens captures
the genuine as well as the genuinely bizarre.

“Every journalist has one. The most crowded file in the cabinet. The one marked ‘future’ — full of stories the consultants don’t understand and television doesn’t have time for.”

The above declaration appears on the Web site of Genuine Human Productions, a documentary film company started in 2000 by Demetria Kalodimos with the stated goal of “writing, directing, shooting and editing true stories about real people . . . genuine humans.”

In the two documentaries she has filmed since launching the venture, the humans depicted are undoubtedly genuine and more than a little offbeat.

Her debut, Friends Seen and Unseen, chronicles the true story of the Prophet Omega, an obscure radio evangelist (now deceased) who preached the word from his Nashville apartment. Bootleg recordings of his broadcasts have become highly prized by music industry insiders and have become a staple on tour buses transporting rock legends such as Bob Dylan and the Rolling Stones. His famously surreal tag lines included, “I am what I am and that is all I am and I am it” and “I feel like a black ant on a black rock on a black night.”

For her documentary, Kalodimos interviews several well-known artists and musicians who discuss the Prophet’s influence on their own creative work. The film also features detective work revealing the Prophet’s identity for the first time.

Friends Seen and Unseen was the only entry in the 2000 Nashville Independent Film Festival to sell out two screenings in advance. Awarded one of four Tennessee Spirit Awards, the film also earned an encore screening before the Directors Guild in Los Angeles. The film festival’s director, Michael Catalano, told a Nashville newspaper, “I’ve gotten calls from as far as New York and Los Angeles . . . . The buzz is unreal, people want to see this piece.”

Kalodimos repeated that buzz with her next film, Injurious George, about George Mitchell, aka the Nashville Footstomper, who for 30 years “launched a one-man war upon the feet of local women,” according to a story on the film published in the June 6, 2002, Nashville Scene. “Clad in hard, black dress shoes, Mitchell would sidle up to his victims and bring his wooden heel down hard on the tender bones of their insteps. To the women, it was thinly veiled sexual aggression. It also hurt like hell.”

Between 1970 and 1985, Mitchell had been arrested more than 40 times and spent all but 11 months in jail. “At the height of his notoriety, however, the Footstomper vanished,” according to the Nashville Scene. “The story faded, except in the memory of beat reporters and former victims.” And Demetria Kalodimos, who tracked down the notorious ‘Stomper’ to discover the secrets behind his bizarre behavior and sudden disappearance. Her interview with Mitchell is a highlight of the film, which also sold out at the Nashville Independent Film Festival, drawing rave reviews from the audience and critics.

While George Mitchell has apparently given up his foot-stomping compulsion, Kalodimos’ drive to document the lives of such unconventional characters shows no signs of slowing down. In July, she answered questions about this surprising sidelight of her more conventional journalistic career in an interview with Illinois Wesleyan University Magazine editor Tim Obermiller. Their conversation follows: 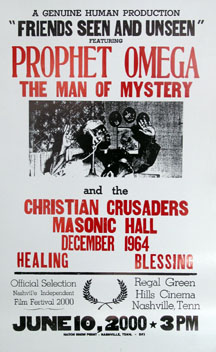 What attracted you to the Prophet Omega as a documentary subject? And is it true that you were actually the first person to reveal the Prophet’s identity?

A friend of mine passed a cassette tape to me back in the early ’80s when I first came to town. It was full of the Prophet’s sermons and I recognized it immediately as a little piece of folk art. It was fascinating to find out how many people also had a copy and could recite it by memory.

Long story short ... after about a year I managed to find the Prophet’s true identity and even in the world of high tech, it proved to be as simple as an old phone book. Now the rock and roll world is thanking me . . . go figure!

Your documentaries concern rather bizarre people and events. Do people who associate you more as a news anchor seem surprised that you’ve chosen these types of subjects to feature in your documentary work?

People who know me well know that I’ve always been fascinated by underground characters or so-called outsiders. They often have stories that are rich and revealing for those of us who think we lead very “normal” lives.

Hollywood has discovered this in some cases, too . . . . I think A Beautiful Mind and Injurious George have quite the same theme.

How do you fund your films?

My films are funded completely from my own cookie jar. I hope to change that at some time in the future either with a grant or a distribution deal. But for now it gives me the freedom to pursue what I need to and want to without constraints. They have run about $10 to $15 thousand apiece.

What’s the biggest challenge of doing these documentaries?

Finding the time is the biggest challenge. I shoot and edit on weekends . . . in the hours before work and in the glow of the midnight oil.

Have you heard anything from ‘Injurious George’ himself since the release of your film?

Yes, George has seen his story and liked it very much. He thought it set the record straight.

What are your current projects?

I’m currently shooting a documentary I hope to have ready by spring for the Nashville Film Festival. It’s another “counter-culture” character who has faded into obscurity but left a big impression — and surprise — this one is a woman!

In your capacity as head of Genuine Human Productions, would you consider serving as a producer for a documentary project that you didn’t actually film or write?

Sure. I am always open to stretching my muscles, as it were.

In fact, I have already served as a writer for other documentaries I did not direct or produce — particularly one called Picture Perfect Jesus that dealt with the iconic Warner Sallman portrait of Jesus that has taken on universal acceptance. It aired on the Odyssey Network nationwide.

Editor’s note: Clips of Kalodimos’ films can be seen at www.genuinehuman.com.