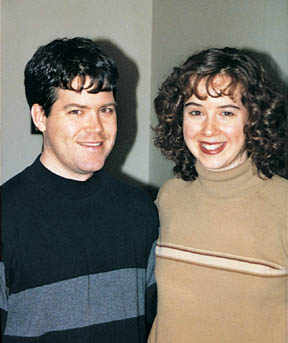 It sounded like some lame attempt at a zero-sum gain. My friend Chris was leaving IWU in the spring, but take heart: a girl from his church was starting in the fall. She was to look us up; we were to look her up. So I did: I found her picture in the fall 1990 freshman directory. She listed her interests as “music, people.” I was a musician, and I was a person. Perhaps we were meant to be friends.

It took a while for my group of friends and me to connect with Kara—her new friendships grew more quickly out of the pool of freshmen at Ferguson Hall and the new student outreach by InterVarsity Christian Fellowship. But sometime over the course of her first semester, Kara came to our Bible study. She kept coming back. I kept hoping she’d come back.

Eventually several people, Kara and I among them, began meeting in the small chapel above the Holmes Memorial Student Center to pray for each other and the needs of our campus. Kara and I lingered one night, sitting to talk on a black cracked-leather sofa at the foot of the stairway, across from the information desk. Several hours later we went our separate ways as a campus security officer locked the doors to the HMSC behind us. I walked home struck by how much I had shared with her, and how much I still wanted to share with her. I was intrigued, but nervous enough to not indulge my growing attraction to this unusual girl.

Two months later as I prepared to leave for a spring break trip to New Orleans with our campus chapter of Habitat for Humanity, Kara brought me a card, wishing me a good trip. I read it, of course, and thought of her throughout the week. One night I stood at the edge of a bay in the French Quarter listening to a song by Edie Brickell & the New Bohemians: “I’m glad no one’s here, just me by the sea / But man, I wish I had a hand to hold.” I realized that I wanted to hold Kara’s hand.

I came home determined but still nervous. My friend Sue complicated matters by sharing with Kara my ill-conceived conviction that “I don’t date my friends.” I had forgotten about that.

I called Chris—my friend who left IWU as Kara came. He laughed at my dilemma; he had thought all along that she and I would make a good we. That settled it: I left a message with Kara’s roommate, Reena, on April Fool’s Day. Kara thought it was a joke. It wasn’t. (Follow-up e-mail from Dave explains: “I left a message for Kara on April Fool's Day asking simply that she call me; Kara thought it was a trick because she had been wishing for a while that I would call.”

We made plans to go to a movie that Friday, after a concert by my jazz combo Active Ingredient. I drove us to the theater to see the film The Five Heartbeats. Partway through the film I asked if I could hold her hand. She said yes. So I did. 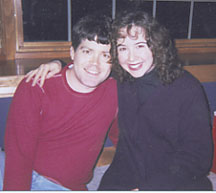 Kara and I were married October 1, 1994—three and a half years after I asked her out, and four and a half months after Kara’s graduation. On our fifth anniversary we came back to IWU. We sat in the Bible Garden where I first told Kara I loved her (during a late night fire drill); ate at our favorite restaurant, Tobin’s Pizza (arguably the best thin-crust bacon pizza in the world); said hello to Kara’s professor and adviser, Dr. Sikora, in the sociology department; and enjoyed the sights and sounds of the city that percolated our relationship. In the abstract, Bloomington is a decidedly unromantic town, but in the particulars—from the bulletin board in the lobby of Ferguson Hall that temporarily wore my marriage proposal, to the bridge overlooking the trainyards that we should have avoided but that offered a serene backdrop to our deepening conversations—Bloomington is anything but Normal. (Follow-up e-mail from Dave explains: “The bridge overlooking the trainyards was dangerous because it wasn't well lit, we went late at night, and the bridge wasn't in the greatest neighborhood.”— Submitted by David Zimmerman ’92 (wife is Kara Bigelow Zimmerman ’94)