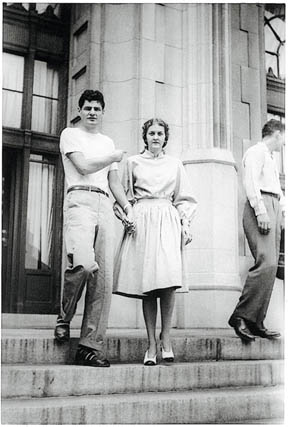 The year was 1944 when I went to Illinois Wesleyan. The ratio was five girls to one boy. I had one. I was pinned to the late Dean Bonnell. The Sigma Chi Serenade is an extra special occasion in a young girl’s life.

In my sophomore year, near Thanksgiving, I was helping Mrs. Hazzard serve tea. The Hazzards’ had tea and cookies each afternoon for students. It was fun to sit down and visit after a day of classes. Dr. and Mrs. Hazzard were good friends of my parents, and I enjoyed being with them.

A new boy, Jack Tuschhoff and his sister Mary Neureuther came by the house to see if they had a room to rent, as Jack was planning to come back to school next semester. There was a room, and he’d be back. I told Mrs. Hazzard I thought he was a nice person. She said he was and that his father was a minister, too.

The Hazzards had adopted three children, a girl and two boys—Mary, Joe, and Bob. They were full of energy and enthusiasm. When they discovered that Jack and I were going to have a date, they were excited! So excited, they hung a calendar in the hallway and marked off the days ‘til the date arrived.

There were five boys plus Jack in the group. Dick Peters, Bob Denius, Harry Mehl, John Moser and John Longbons.

We became good friends and try to get together at least four times a year. Dick Peters dropped out of the group, and we picked up Howard Marshall.

Jack and I were married first. We had a new house, but little furniture. One bed, a picnic table for the kitchen, four orange crates turned on end that held a small over, a two electric burners unit, and the bottom of a Silex coffee pot. It was winter so we didn’t need a refrigerator yet.

The other boys went to Florida our first year for the holidays and came back for New Year’s Eve 1948. I insisted they spend the night. We located a number of sleeping bags and were set.

Howard Marshall married the late Minnie Lou Osborne and is now married to Marian Burkhart. John Longbons spent a number of years in Europe and Compensatory Education and married Francoise. They live in London.

Most of us have children except Bob and Sally Denius and John and Francoise Longbons.

By getting together several times a year, our children are real friends. Our sons, Bryan and Craig, were trying to identify who these other people were because we have lots of relatives. When they were three or four, I explained that they were “Dear Friends.” They spent the afternoon saying, “Just Dear Friends.”

One year when Mary Ann Smith Donnell ’53 was at Wesleyan, she decided she’d like to come to the New Year’s Party. I said, “Sure. How are you getting here?” She decided she’d invite her boyfriend. I knew they’d sleep on the floor like the rest of us.

What I didn’t plan for was the time they’d arrive. I went to bed after three o’clock, and in my haste to get to bed, I checked all the doors and fell asleep. When they arrived, they couldn’t wake any of us, so they slept in the car. I am a great chaperone!

These friendships started in 1944. The New Year’s parties started in 1948. That’s 54 New Years’ parties, plus a Spring Fling, a Summer Picnic, and an Autumn Wiener Roast each year. We’ve had New Years in each others’ homes, gone to Florida, different hotels, and, recently, Gulf Shores.

Jack and I are hosts this year. There are several plans under consideration. We have to start the year out right...together!— Submitted by Carol Smith Tuschhoff ’48, (husband is Jack Tuschhoff ’45